Minister of Boston, Master of Emanuel and St. Johns- College, Professor of Divinity, in the University of Cambridge, and a Member of The Assembly of Divines at Westminster.

“Even now we hear men inveigh against those sins in the pulpit which they are known to be notoriously guilty of in their conversations.” 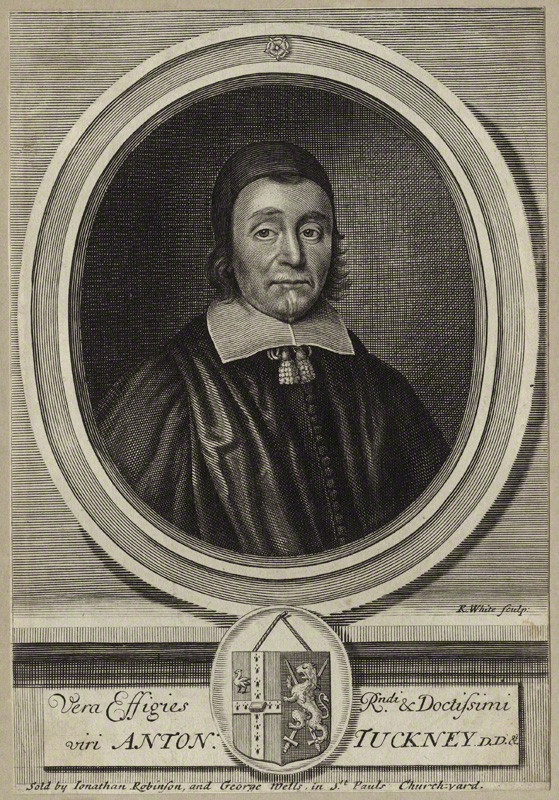 Anthony Tuckney (1599-1670) was the son of Mr. Tuckney, Minister of Kirton, about three miles from Boston in Lincolnshire. He was born in Sept. 1599, and educated in Emanuel-College, Cambridge. When he had taken the degree of Master of Arts, he, for some time left the College, and became domestic chaplain to the Earl of Lincoln. But being afterward chosen Fellow of his College, he returned there, and continued there until after his commencing Bachelor of Divinity, During that time, he was a most diligent and conscientious tutor. He trained up many pupils, who were afterward highly useful both in church and state; and who always retained a grateful remembrance of him. He left the University on the invitation of the people of Boston, in his native country. On their solicitation, he became assistant to , the celebrated Mr. John Cotton, minister of Boston. He continued in that relation with Mr. Cotton, until he removed to America. After Mr. Cotton’s move to New England, in the year 1683, Mr. Tuckney, who had for some time been Mr. Cotton’s assistant, became his successor in the pastoral office at Boston. He continued his ministry in that place during a sore visitation of Divine Providence by the pestilence; and he met with some disturbance from the Spiritual courts.

In the year 1643, he was called up to London by the Parliament, to sit in the Assembly of Divines at Westminster. He and Mr. Thomas Coleman were chosen Members of that Assembly for the county of Lincoln. The times being very troublesome and dangerous, during the heat of the war, he took his whole family with him to London, and never returned to dwell in Boston. But, at the desire of the people, he retained his title to the place, until the year 1660, when King Charles the Second came in, and then he resigned it, and Dr. Howe succeeded him. After he left the place, he received none of the profits. He was very highly esteemed in the Assembly, and is marked as constantly attending during the session. He was appointed one of the Committee for the examination and approbation of those ministers who petitioned for sequestered places. In 1645, he was chosen one of the Committee of Accommodation. He had a considerably hand in the Assembly’s confession of faith, and catechism. It is said, that many of the answers in the Larger Catechism, and particularly the exquisite exposition of the commandments, were his, and were continued for the most part in the very words which he brought in.

After he had been some time at London, he was seeded minister of Michael-Quern, at the upper end of Cheapside, where he continued until 1648; with the exception, that after he became Master of Emanuel-College, which was in 1645, he spent some months in the year at Cambridge. In 1648, he removed to Cambridge with his family, and was that year Vice-Chancellor of the University. In the year 1653, when Dr. Thomas Hill died, Dr. Arrowsmith was chosen Master of Trinity-College, and Dr. Tuckney was chosen Master of St. Johns College.

And he succeeded Dr. Arrowsmith as Royal Professor. He was eminently courageous in opposing orders sent by the higher powers. He was a man of great humility; and yet few, if any, ever maintained their authority better than he did in the University when Vice-Chancellor, and in the College of which he was Master. Many gentlemen and ministers sent their sons to that Seminary of learning merely on his account, that they might have the benefit of his instruction.

After the Restoration of King Charles the Second, he was one of the Commissioners at the Savoy, but had no hope of any accommodation upon seeing how affairs were conducted. Before the time for the conferences was expired, he received a letter from the King, desiring him to resign both his Mastership and Professorship, which if he did, his Majesty, in consideration of his great pains and diligence in discharging the duties of his office, would oblige his successor to give him sufficient legal security, to pay him one hundred pounds yearly during his natural life. The Doctor thought that it would answer no good end to contend with the Court in that juncture, and that it would not be long that he could keep his places as things wore then managed; and accordingly, on receiving the King’s letter, with another accompanying it from the Earl of Manchester, he resigned both his places. The annuity which was promised to him was punctually paid him, for several years, by Dr. Gunning, who succeeded him. Mr. Wood, speaking of this annual allowance to Dr. Tuckney, which was given by Dr. Gunning, says, “Which act of his, being excellent and singular, is here remembered to his everlasting fame.”

Dr. Tuckney is classed among the Ministers, Masters of Colleges, etc. who were ejected or silenced after the Restoration, by, or before, the Act of Uniformity, in Dr Calamy’s Account. Dr. Tuckney, on leaving the University of Cambridge, retired with his family to London, and lived in St. Mary-Axe, and continued there until the plague in 1665, preaching sometimes in his own house, and occasionally in the families of several friends, in the time of the sickness he lived at Colwick-Hall near Nottingham. There he was not long after troubled and confined; but it was in a gentleman’s house, where he was treated very civilly, and within a few months discharged.

After the Five-Mile Act came out, he shifted about in several counties. He removed to Oundle in Northamptonshire, and from that place to Warmington, in the same county; and after the dreadful lire of London in 1666, in which his Library was burned, he removed to Stockerson, in Leicestershire; and thence to Tottenham, near London, and from that, in 1669, he removed to Spittle-yard, London, where he died in the month of Feb. 1670, in the seventy, first year of his age. And he has left behind him the character of an eminently pious and learned man, a genuine friend, an indefatigable student, a candid disputant, and an earnest promoter of truth and godliness. It was his custom to have a sermon preached m the chapel of Emanuel, and of St. John’s College, the morning after every public commencement, by one who had been of the College. This laudable custom was carefully observed many years.