One of the Westminster divines, with moderate views.

The Works of Richard Love available in old English:

a. Two Latin congratulatory addresses on the return of Charles II, which he published in one volume at Cambridge, 1660.
b. Published works in the Cambridge collection of verses which were published at the Restoration.
c. A sermon, preached at Whitehall to parliament at the monthly fast, 30 March 1642, entitled “The Watchman’s Watchword,” 1643, Cambridge. 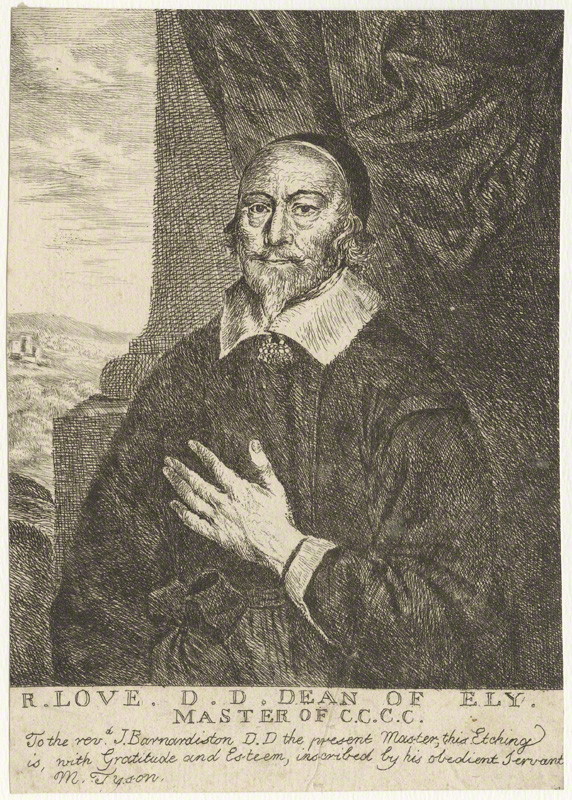 Richard Love, D.D. (1596-1661), dean of Ely, son of Richard Love, an apothecary who died in 1605, was born in the parish of St. Mary the Great, Cambridge, on 26 Dec. 1596. He was probably educated at the free school, Cambridge, subsequently at Clare Hall, where he was a fellow before 1628. In 1628 he was proctor, and about the same time was made chaplain in ordinary to Charles I, who on 27 Oct. 1629 presented him to the living of Eckington, Derbyshire. In January 1630-1 he proceeded D.D., on the king’s recommendation. On 12 Oct. 1631 he received the prebend of Tachbrook in Lichfield Cathedral. By a mandate from Charles I, Love was made master of Corpus Christi College on 4 April 1632, immediately on the death of Dr. Butts. A quarrel followed between Love and the Earl of Warwick. Warwick, supported by the king, tried to press a nominee of his own for a vacant fellowship, but the master and fellows resisted and finally the king directed the withdrawal of the candidate, after receiving a letter of apology and explanation from Love. From November 1633 to November 1634 Love was vice-chancellor. His most notable act in that capacity was to cause the arrest of Peter Hausted in the pulpit of St. Mary’s while preaching a sermon against the neglect of religious duties in the university. During the plague of 1638 a license was granted to all fellows and scholars to leave the college, but the master stipulated for one remain ‘for the safety of the college.’ In July 1643 a general leave of absence was granted to the fellows, but Love was one the four heads of colleges at Cambridge who, ‘by the special favour of their friends and their own wary compliance, continued in their places’ (Fuller, Hist. of Cambridge, p. 169). Colonel Walton, the regicide, was Love’s friend, and protected him during the supremacy of the parliament. In 1649 he was made Lady Margaret professor of Divinity, and appears to have retained his prebend, but in 1650 his hold on his preferments was imperilled by his refusal to subscribe the Engagement. His wife wrote to a relative that he had promised to live quietly and give no disturbance to the public, and anticipated ruin were he forced to resign the professorship. Whether or no he subscribed is not certain, but he managed to retain his preferments, and was even made a member of the assembly of divines, though he apparently took no part in the proceedings. Love composed two Latin congratulatory addresses on the return of Charles II, which he published in one volume at Cambridge, 1660, 4to. In the first, delivered at Cambridge, Love, with much address, expatiates on the calamities of the late rebellion, and adroitly excuses his temporary acquiescence. The second (published by the king’s command) was presented by Love in person, acting as deputy vice-chancellor, at Whitehall, 5 June 1660. He also contributed to the Cambridge collection of verses which were published at the Restoration. So well did he recommend himself to Charles’s favour that, besides allowing him to retain his other posts, the king made him dean of Ely by patent dated 14 Aug.; he was installed 28 Sept. He died at the beginning of February 1661, and was buried in his college chapel. Lloyd styled him a ‘natural wit and orator,’ and adds that when Lady Margaret professor he was sure ‘to affront any man that put up questions against the doctrines or discipline of the church of England in the worst of times.’ He seems to bare held moderate views. He laid out 100l. on the college, gave a window to the the master’s lodge, and left 10l. and a polyglot bible to it in his will. To his old college, Clare, whose Master, Dr. Parke, was his intimate friend, he left 50l. He married about 1632 Grace, daughter of his step-father Henry Moutlow, Gresham professor of law and public orator, and had four sons, the eldest of whom was at Clare Hall in 1662, and two daughters. The elder, Anne, married Dr. Tenison, archbishop of Canterbury, who bequeathed Love’s portrait to Corpus Christi College.

Besides the orations Love published a sermon, preached at Whitehall to parliament at the monthly fast, 30 March 1642, entitled ‘The Watchman’s Watchword,’ 1643, Cambridge, 4to.