Introduction to the Writings of Dr. Gordon Clark - by Dr. C. Matthew McMahon

Apologetics - A Reasoned Defense of the Christian Faith

Who is Dr. Clark? By Dr. C. Matthew McMahon

Works that you will find here on the site by Dr. Clark are simply summaries of Clark’s most important works. Having said that, it is also important to note that I do not agree with everything Clark says. As a matter of fact, I agree with about 75% of what he says and currently have rejected the rest (eat the meat, throw away the bones).

The purpose of these articles on the website is simply to give an overview of some of his most well known works. These articles basically set forth what Clark says on each of the topics listed.

Who is Dr. Gordon Clark? 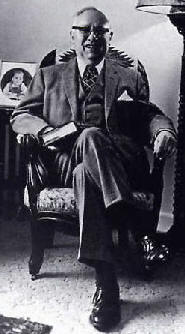 Dr. Gordon Clark is not primarily an apologist for the Christian faith, but rather a professional philosopher critiquing what secular philosophers have said concerning ultimate reality. Through rigorous logic, he continually sought to evaluate and expose the weaknesses of secular philosophy, and to espouse Christian theism as dominantly superior. Although he touches on all areas of philosophy in his works, he is predominately taken up with understanding and evaluating thoughts about epistemology – how it is that men know, and how they know what they know.

Clark was influenced heavily by the nature of the Reformation. He believed that doctrine was best expounded by the Reformers and followed their lead in exegesis while applying it in the realm of the philosophical views in which he lived.

Clark was an American philosopher and Calvinist theologian. He was a primary advocate for the idea of presuppositional apologetics and was chairman of the Philosophy Department at Butler University for 28 years. He was an expert in pre-Socratic and ancient philosophy and was noted for his rigor in defending Platonic realism against all forms of empiricism, in arguing that all truth is propositional and in applying the laws of logic. His theory of knowledge is sometimes called scripturalism. Clark was raised as a Christian and studied Calvinist thought from a young age. In 1924, he graduated from the University of Pennsylvania with a bachelor’s degree and earned his doctoral degree from the same institution in 1929. The following year, he studied at the Sorbonne.

He began teaching at the University of Pennsylvania after receiving his bachelor’s degree and also taught at Reformed Episcopal Seminary in Philadelphia. In 1936, he accepted a professorship in philosophy at Wheaton College, where he remained until 1944, when he accepted a position at Butler University. In 1974, he left Butler and taught at several institutions, including Covenant College in Lookout Mountain, Georgia and Sangre de Cristo Seminary in Westcliffe, Colorado. In 1944, Clark was ordained as a minister in the Orthodox Presbyterian Church. In the years that followed, Clark would change denominations several times: first to the United Presbyterian Church of North America in 1948 following the Clark-Van Til Controversy and then to the Reformed Presbyterian Church of North America, General Synod in 1957, where Clark was instrumental in arranging a merger with another Presybterian denomination to form the Reformed Presbyterian Church, Evangelical Synod in 1965. When this last denomination merged with the Presbyterian Church in America in 1983, Clark refused to join and instead entered the Covenant Presbytery in 1984. He died in 1985 and was buried in Westcliffe, Colorado.