The Golden Chain - A Chart by Dr. William Perkins

Visual Theology at its Best

I have reproduced Mr. Perkin’s Golden Chain from an old photocopy I had obtained of the page on which it resides in his work. I thought it was extremely helpful in many ways, though not necessarily perfect (noting the possible difference on where repentance lies in the conversion of a believer. This takes Perkins some considerable time to explain in his works.)

CLICK HERE to order the charts.
There are 13 charts in all and Perkin’s Chart is part of the large PDF download you can obtain by supporting the site. 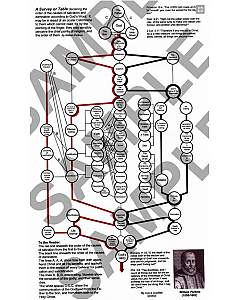 Perkins’ “Golden Chain” is a basic guide to Puritan theology and preaching. Though not every Puritan Preacher agreed with each detail of Perkins’ Chain, it does represent Reformed doctrine as generally interpreted by the Puritans. His analysis and organization of Soteriology is excellent, especially in relating the work of Christ to the elect believer. Perkins considers faith the result of God’s effectual call rather than of sinful man’s “free will.” In examining his chart, you will find that repentance is set at the end of the believer’s conversion experience, right before his “new obedience”. He considered true repentance a result from sanctification which to lead to complete obedience. Not all the Puritans agreed with this, and it seems to be more unique with Perkins than any others.

Perhaps the most interesting feature of the Golden Chain is the religious zealot whose penitence is only temporary and arises from his sinful heart. The Puritans never considered church members saved just because they met outward requirements like baptism, confession of a creed, or a response to the unorthodox altar call. They preached the perseverance of true believers in obedience and good works as a result of true conversion. They labored carefully not to give people a false sense of assurance.

The Puritans generally also were wary of those “converts” who showed extreme religious “zeal.” This would be likened to the “spurious faith” of the seed which fell on shallow soil. Not that they opposed spiritual zeal, but they recognized it could be a “cover-up” for deep, unrepentant sin.

Another important aspect of Perkin’s chart is his double predestination. Since this is generally accepted by the Puritans at large, and can be seen clearly and vividly in much of the Puritan’s writings, it should be considered (and ultimately accepted) by preachers of our own day.