A long living puritan had a command of language, was a man of warm affections and deep and earnest convictions.

“The greatest part of a Christian’s grace lies in mourning for the want of it.”

The works of Edward Dering available in old English:

Deliverance-Obstruction (or, The Setbacks of Reformation). (49 pages) PDF Internet Archive

The Works of Edward Dering. (684 pages) PDF Internet Archive
Which include the following works:
A Sermon Preached Before the Queen’s Majesty. (40 pages)
A Sermon Preached at the Tower of London. (20 pages)
Certain Godly and Comfortable Letters. (60 pages)
A Brief and Necessary Catechism for Christian Housholders. (32 pages)
Godly Private Prayers for Christian Families. (100 pages)
Twenty-Seven Lectures or Readings upon the Epistle to the Hebrews. 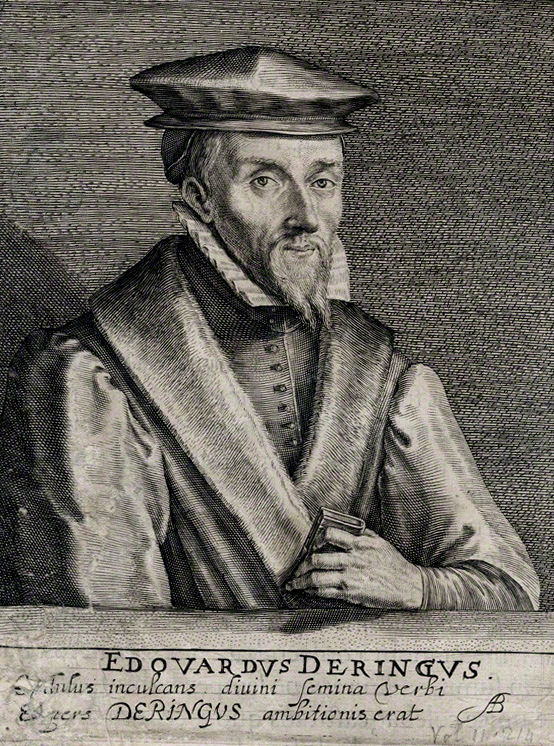 Dering’s writings show that he possessed a remarkable command of language, and that he was a man of warm affections and deep and earnest convictions; but it is no less evident that he was by temperament singularly vehement and impulsive, and wanting in sobriety of judgment and in discretion. He seems to have fully merited Strype’s description as being ‘a great enemy to the order of bishops’ (Annals, ii. i. c. 20). On the other hand, his reputation among his contemporaries stood singularly high. By Rutherfurd (‘Free Epistle,’ prefixed to the first part of the Survey) he is named along with Calvin, Cartwright, and Beza, as one to whose judgment he would readily bow. His works have been several times printed, and a complete list as far as known is given by Cooper (Athenæ Cant. i. 356-7). The best collected edition is that of 1614, London, 4to. This contains (1) ‘A Sermon preached before the Queenes Maiestie.’ (2) ‘A Sermon preached at the Tower of London.’ (3) ‘Twenty-seven Lectures or Readings upon the Epistle to the Hebrews.’ (4) ‘ Certain godly and comfortable Letters,’ &c. (5) ‘ A briefe and necessary Catechisme for Christian Housholders.’ (6) ‘Godly private Prayers for Christian Families, the whole, the which (greater part of them) were wanting in the former works in octavo. Also certain godly Speeches uttered by Maister Dering,’ &c. Dering’s eldest brother, Richard, was the grandfather of Sir Edward Dering.