A Presbyterian minister of great learning and fervent preaching.
Today, many Christians are turning back to the puritans to, “walk in the old paths,” of God’s word, and to continue to proclaim old truth that glorifies Jesus Christ. There is no new theology. In our electronic age, more and more people are looking to add electronic books (ePubs, mobi and PDF formats) to their library – books from the Reformers and Puritans – in order to become a “digital puritan” themselves. Take a moment to visit Puritan Publications (click the banner below) to find the biggest selection of rare puritan works updated in modern English in both print form and in multiple electronic forms. There are new books published every month. All proceeds go to support A Puritan’s Mind.

“This doctrine [of justification] is a spiritual mystery, and does not lie level with a natural understanding (1 Cor. 2:10, 14). Working for life a man naturally understands, but believing for life, he understands not. To mend the old man, he knows; but to put on the new man by faith is a riddle to him. The study of holiness, and endeavoring to square his life according to God’s law, he knows a little of, though he can never do it; but to draw sanctification from Christ by faith, and to walk holily in and through the force of the Spirit of Christ in the heart by faith is mere empty language to him.”

The Works of Robert Traill available in old English:

A Letter from Robert Traill to His Wife, and Also One to His Children. (36 pages) PDF Google books
Written during the time of his banishment. Appended with “Advice About Some Duties”.

The Works of Robert Traill, Volume 1. (348 pages) PDF Internet archive
Containing:
1. Thirteen sermons on the Throne of Grace. Hebrews 4:16.
2. A sermon on the following question, “By what means may ministers best win souls?” 1 Timothy 4:16
3. A Vindication of the Protestant Doctrine of Justification, and of its Preachers and Professors, from the Unjust Charge of Antinomianism.

The Works of Robert Traill, Volume 3. (362 pages) PDF Internet archive
Containing “The Steadfast Adherence to the Profession of our Faith Recommended in Twenty-one Sermons on Hebrews 10:20-24”. 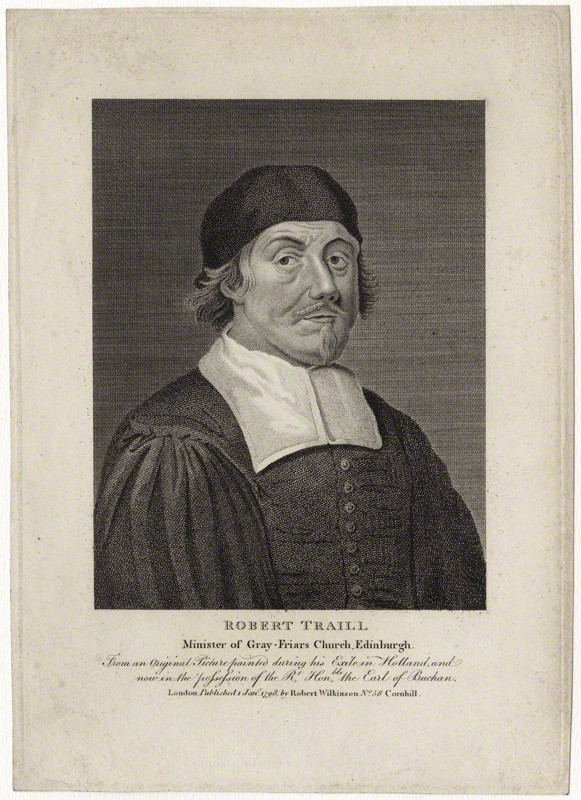 Robert Traill (1642–1716), presbyterian divine, was born at Elie in Fifeshire in 1642. His father, Robert (1603–1678), was son of Colonel James Trail of Killcleary in Ireland, and grandson of Trail of Blebo in Fifeshire. He became chaplain to Archibald Campbell, first marquis of Argyll [q.v.], and in 1639 was presented to Elie. He was translated to the Greyfriars church, Edinburgh, in 1648, and became a zealous covenanter. In 1644 he was a chaplain with the Scottish army in England, and was present at the battle of Marston Moor. He was one of the ministers who visited the Marquis of Montrose in prison and attended him on the scaffold. He afterwards joined the protesters, and was one of the party who reminded Charles II at the Restoration of his obligation to keep the covenants, for which he was banished for life. He sailed for Holland in March 1662–3, but returned to Edinburgh, where he died on 12 July 1678. A portrait of him is given in Smith’s ‘Iconographia Scoticana’ (Hew Scott, Fasti, i. 40–1, and authorities there cited). He left an autobiography in manuscript. He married, on 23 Dec. 1639, Jean Annand, daughter of the laird of Auctor-Ellon, Aberdeenshire. She was imprisoned in June 1665 for corresponding with her exiled husband.

Robert Traill’s early education was carefully superintended by his father, and at the university of Edinburgh he distinguished himself both in the literary and theological classes. At the age of nineteen he stood beside James Guthrie, his father’s friend, on the scaffold. He was for some time tutor or chaplain in the family of Scot of Scotstarvet, and was afterwards much with John Welch, the minister of Irongray, who was the first to hold ‘armed conventicles.’ In a proclamation of 1667 he was denounced as a ‘Pentland rebel’ and excepted from the act of indemnity. It is uncertain whether he was present at that engagement or not; but he fled to Holland, where he joined his father and other Scottish exiles. There he continued his theological studies, and assisted Nethenius, professor at Utrecht, in preparing for the press S. Rutherford’s ‘Examen Arminianismi.’ In 1669 he was in London, and in 1670 was ordained to a presbyterian charge at Cranbrook in Kent. He visited Edinburgh in 1677, when he was arrested by the privy council and charged with breaking the law. He admitted that he had preached in private houses, but, refusing to purge himself by oath from the charge of taking part in holding conventicles, he was sent as a prisoner to the Bass Rock in the Firth of Forth. Having given a promise which satisfied the government, he was liberated a few months afterwards and returned to his charge in Kent. He afterwards migrated to a Scots church in London, where he spent the rest of his life.

In 1682 he published a sermon, ‘By what means can ministers best win souls?’ and in 1692 a letter to a minister in the country—supposed to be his eldest brother, William (1640–1714), minister of Borthwick, Midlothian—entitled ‘A Vindication of the Protestant Doctrine concerning Justification and of its Preachers and Professors from the unjust Charge of Antinomianism.’ This ‘angry letter,’ as Dr. Calamy calls it, was occasioned by the violent controversy which broke out among the dissenting ministers of London after the republication in 1690 of the works of Dr. Tobias Crisp. Charges of Antinomianism were made on the one side and of Arminianism on the other, and Trail was distinguished for his zeal against Arminianism. A somewhat similar controversy followed in Scotland, and as Boston of Ettrick and others took the same side as Trail, his works became very popular among them and their adherents. He afterwards published ‘Sermons on the Throne of Grace from Heb. 4:16’ (3rd edit. 1731), and ‘Sermons on the Prayer of Our Saviour, John 17:24.’ These works were devout, plain, and edifying, and were in great favour with those who were attached to evangelical religion.

Traill died unmarried on 16 May 1716 at the age of seventy-four. His brother William, the minister of Borthwick, has had many clerical descendants of note, both in the church of Scotland and in the church of Ireland—among the latter James, bishop of Down and Connor (Hew Scott, Fasti, i. 266).