A young puritan preacher and theologian, with some of the best writings on the Christian Life.

“The worth and excellency of a soul is to be measured by the object of its love.”

The Works of Henry Scougal available in old English:

2. The Works of Henry Scougal. (279 pages) PDF Google Books
This volume includes both The Life of God in the Soul of Man (above), plus his funeral sermon (preached by George Gairden, on Philippians 1:2), and nine discourses:
a. The Superior Excellency of the Religious. Proverbs 12:26.
b. The Indispensable Duty of Loving our Enemies. Luke 6:27.
c. The Necessity and Advantage of Early Afflictions. Lamentations 3:27-28.
d. That There are but a Small Number Saved. Luke 13:23.
e. The Duty and Pleasure of Praise and Thanksgiving. Psalm 108:15.
f. On the Nativity of Our Saviour. Psalm 2:11.
g. On the Passion of Our Saviour. Lamentations 1:12.
h. Preparation for the Holy Sacrament. Joshua 3:5.
i. Of the Importance and Difficulty of the Ministerial Function. 2 Corinthians 2:16. 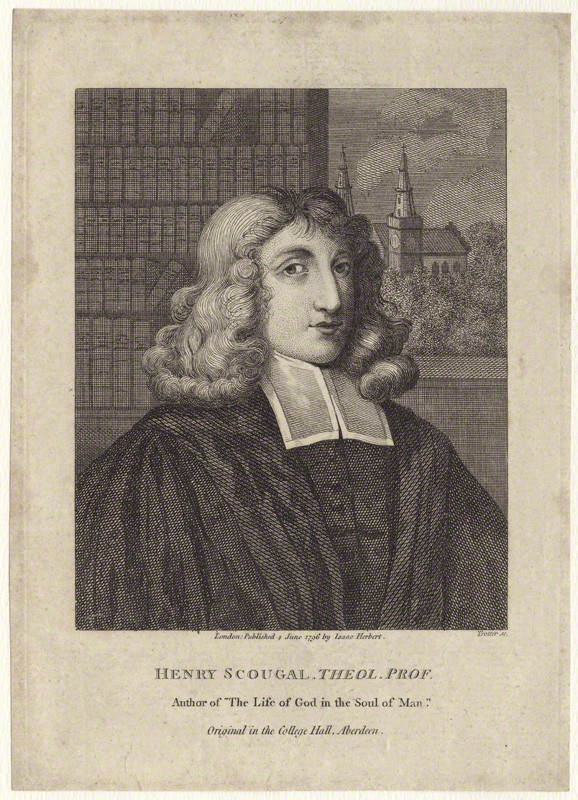 Henry Scougal (1650–1678), Scottish divine, son of Patrick Scougal , bishop of Aberdeen, was born, probably at Leuchars, Fifeshire, in June 1650, and was educated at King’s College, Aberdeen, where he graduated M.A. in 1668. He was a distinguished student, and, after a precedent set in the case of George Gordon, first earl of Aberdeen , being ‘thought worthy to be a master where he had lately been a scholar,’ he was immediately promoted to be ‘regent’ or professor. The discipline of his class seems to have suffered, but Scougal has the credit of being probably the first professor in Scotland to teach the Baconian philosophy. On the other hand, he carefully guarded his pupils against ‘the debauched sentiments’ of the ‘Leviathan’ of Hobbes. Ordained in 1672, Scougal was appointed minister of the parish of Auchterless, Aberdeenshire, and as such held the position of precentor in the cathedral of Aberdeen. In his country cure he showed no less independence than in his chair at Aberdeen. In a year’s time he was recalled from his pastoral duties to Aberdeen, having been elected by the bishop and synod professor of divinity at King’s College. Scougal belonged to the school of Archbishop Robert Leighton , and made it his aim to impress his students with a sense of the holiness of the function to which they were destined, as well as to instruct them in theology. Like Leighton, he employed his summers in visiting the continent, and while passing through London on one such visit he was induced by Gilbert (afterwards bishop) Burnet , then preacher at the rolls, to publish the only one of his works which was issued in his lifetime, ‘The Life of God in the Soul of Man.’ Scougal died of consumption at Aberdeen on 13 June 1678, aged 28, and was buried in the university chapel at King’s College. He was unmarried.

Scougal is reckoned one of the saints of the Scottish church, and his ‘Life of God in the Soul of Man’ is one of the few productions of its clergy which have attained the rank of a religious classic. The first edition (London, 1677) was published with the author’s consent, but without his name, by Gilbert Burnet, who supplied the preface, and probably also (though it is not enumerated in the list of Burnet’s writings given by his son) a tract entitled ‘An Account of the Beginnings and Advances of a Spiritual Life,’ which was bound up with it. Six impressions of this edition appeared between 1677 and 1773, the fifth being under the auspices of the Society for the Promotion of Christian Knowledge. In 1726, a handsome edition, discarding Burnet’s tract and preface, was issued by Patrick Cockburn , a son of the author’s cousin; in 1727 a French translation appeared at The Hague. In 1742 an edition was printed at Newcastle ‘from plates made by William Ged , goldsmith, in Edinburgh,’ the inventor of stereotype printing. A cheap edition published at Edinburgh by Thomas and Walter Ruddiman, ‘price 6d., or 5s. a dozen for giving away,’ has a warm commendatory preface, dated 1739, by Principal William Wishart of Edinburgh University. A beautiful edition was published at Glasgow by R. and A. Foulis in 1770. The latest edition appeared at Aberdeen in 1892.

In Scotland the work was held in high esteem, and although some of the more rigid presbyterians spoke of it bitterly as ‘Arminian,’ it has been as much valued by many presbyterians as by the episcopalians. Perhaps the most remarkable testimony to its influence is the fact that Whitefield (Lecky, Hist. of England in the Eighteenth Century, ii. 553) ‘ascribed to it his first conviction of that doctrine of free salvation which he afterwards made it the great object of his life to teach.’ Charles Wesley gave the book to Whitefield, and it was a favourite with John Newton. Southey and Alexander Knox were among its special admirers, and Bishop John Jebb (1775–1833)  included it in his ‘Piety without Asceticism’ (1831). In 1830 it was reissued in a series of ‘Select Christian Authors,’ published at Glasgow under the auspices of Dr. Thomas Chalmers

Besides some sermons (Glasgow, 1751), nine of which were prefixed to Cockburn’s edition of the ‘Life of God’ (1726), Scougal’s ‘Reflections and Meditations’ and ‘Essays, Moral and Divine,’ written while he was a student, were published at Aberdeen in 1740, and reissued in collected editions of his works, 1765, 1773, and 1830. William Orem , in his ‘Old Aberdeen’ (1791), has preserved the ‘Morning and Evening Service’ which Scougal prepared for use in Aberdeen Cathedral; the prayers are printed in Nichols’s ‘Bibliotheca Typographica,’ in Peter Hall’s ‘Fragmenta Liturgica’ (Bath, 1848), and in the Aberdeen edition of the ‘Life of God,’ 1892. Patrick Cockburn states that Scougal left behind him three tracts in Latin, ‘A Short System of Ethics,’ ‘A Preservative against the Artifices of the Romish Missionaries,’ and the beginning of a work on ‘The Pastoral Care;’ but these do not seem to have been printed, and the manuscripts are lost.

There is a fine portrait of Scougal in the senatus room at King’s College, Aberdeen; a photogravure is prefixed to the latest edition (Aberdeen, 1892) of his ‘Life of God.’