One of the most popular Puritan preachers and teachers though today rarely published.

“The Christian soul is content that God should rule everything, not only the eye, or hand, or tongue, but the whole man.”

The Works of Isaac Ambrose available in old English (Puritan Publications is working to publish all of Ambrose’s unpublished works): 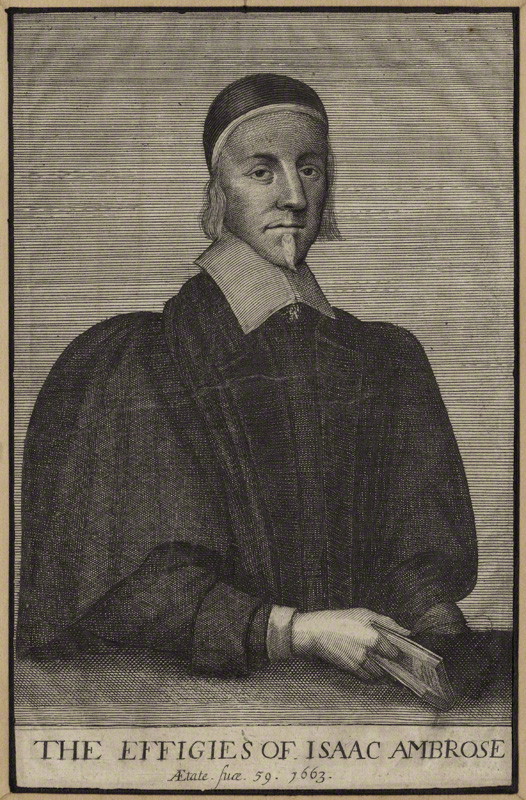 Isaac Ambrose (1604–1663), was a Lancashire divine whose works were long held in esteem. He was descended from the Ambroses of Lowick, Furness, and was baptized May 29, 1604 at Ormskirk, where his father was vicar. He entered Brasenose College, Oxford, 1621, in 1624 he proceeded to earn a B.A., and having been ordained was presented by Bishop Morton to the “little cure” of Castleton, Derbyshire, 1627. Ambrose attracted the notice of William Russell, afterwards earl of Bedford, and was by the king’s influence incorporated at Cambridge University 1631 to 1632. Having resigned his small living in 1631, he was made one of the king’s four preachers in Lancashire, and took up his residence at Garstang. About the year 1640 the interest of the religious Lady Margaret Hoghton obtained for him the vicarage of the corporate town of Preston in Amounderness. In the November of 1642 he was for a time taken prisoner by the king’s commissioners of array, and he was again arrested March 20, 1643; but in both cases was released by the influence of neighboring gentlemen. On the arrest of Robert Bolton in May 1644, he took refuge at Leeds. He associated himself with the establishment of Presbyterianism in the county, and held important positions by the favor of the House of Commons and his neighboring brethren. Having set his hand to the “Agreement of the People taken into consideration,” the committee of plundered ministers ordered him to be sent a prisoner to London (April and May 1649), where he made the acquaintance of Lady Mary Vere and other persons, who, with the Earl of Bedford, relieved his necessities. He was still the “painful” minister of Preston in 1650. The prominent connection of this town with the war, and the strong party feelings of the inhabitants, led him to remove to Garstang in 1654; and then, in 1662, he was ejected for nonconformity. Ambrose was himself a Puritan and a Presbyterian seen clearly when he subscribed to the Solemn League and Covenant of 1643, and he was one of the ministers who served on the committee of Parliament appointed to oversee the ejection of “scandalous and ignorant ministers and schoolmasters” during the Commonwealth. Having retired to Preston, he died suddenly of apoplexy in 1663, and was buried January 25th.

He wrote “Prima, Media, and Ultima,” 4to, 1650, 1659; a funeral sermon on “Redeeming the Time” (on Lady Hoghton), 1658, 4to; “Looking unto Jesus,: 1658, 4to; “War with Devils — Ministration of Angels,” 1661, 4to. These were reprinted in folio, with a portrait, 1674, 1682, 1689; and the smaller treatises have frequently been reprinted. He has letters prefixed to some of the works of his friend Henry Newcome. “Ambrose,” says Emund Calamy, “was a man of that substantial worth, that eminent piety, and that exemplary life, both as a minister and a Christian, that it is to be lamented the world should not have the benefit of particular memoirs of him.” His character has been misrepresented by Mr. Wood. He was of a peaceful disposition; and though he put his name to the fierce “Harmonious Consent,” he was not naturally a partisan. He evaded the political controversies of the time. His gentleness of character and earnest presentation of the gospel attached him to his people. He was much given to secluding himself, retiring every May into the woods of Hoghton Tower and remaining there a month. Dr. Halley justly characterizes him as the most meditative puritan of Lancashire. This quality pervades his writings, which abound, besides, in deep feeling and earnest piety. Mr. Hunter has called attention to his recommendation of diaries as a means of advancing personal piety, and has remarked, in reference to the fragments from Ambrose’s diary quoted in the “Media,” that “with such passages before us we cannot but lament that the carelessness of later times should have suffered such a curious and valuable document to perish; for perished it is to be feared it has.”