He was called "The Shakespeare of the Puritans" by Robert Southey. 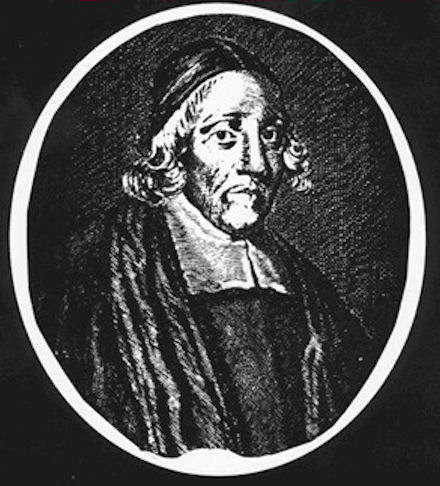 Thomas Adams graduated from Trinity College, Cambridge, with a Bachelor of Arts degree in 1602, and four years later, with a Master of Arts degree from Clare College. Ordained deacon and priest in the Lincoln diocese in 1604, he served as curate of Northill, Bedfordshire from 1605 to 1611. When his new patron dismissed him, Adams’s parishioners signed a petition stating that he had “behaved himself soberly in his conversation, painfully in his calling, lovingly amongst his neighbors, conformable to the orders of the Church, and in all respects befittingly to his vocation” (J. Maltby, Prayer Book and People in Elizabethan and Early Stuart England, p. 78). This testimony may have assisted Adams in securing an appointment the following year as vicar of Willington, Bedfordshire.

In 1614, he became vicar of Wingrave, Buckinghamshire, and then moved to London in 1619, where he was given the rectories of St. Benet Paul’s Wharf and the small church of St. Benet Sherehog. For his first five years in London, he also held the lectureship of St. Gregory’s, a parish of 3,000. Later on, he preached on occasion at St. Paul’s Cross and Whitehall, and served as chaplain to Henry Montagu, First Earl of Manchester and Chief Justice of the king’s bench.

Adams was a powerful preacher, much-quoted writer, and influential divine. Prominent leaders in church and state, such as John Donne and the earl of Pembroke, were among his friends.

Adams was a Calvinist Episcopalian in terms of church polity. He was not opposed to kneeling to receive communion and feared that the abolition of episcopacy advocated by some Puritans would lead to Anabaptism. Nonetheless, Adams embraced Puritan theology, polemics, and lifestyle. J. Sears McGee writes, “Like Puritans he craved careful observation of the Sabbath and was deeply hostile to Rome, the Jesuits, and the papacy, as well as to idleness, over-indulgence in worldly pleasures, and conspicuous consumption in all its forms” (Oxford DNB, 1:261). These things, combined with his eloquent style of writing, led Robert Southey to describe him as “the prose Shakespeare of the Puritan theologians.”

Adams shared the Puritan concern to purge the Church of England of remaining vestiges of Roman Catholicism or “popery,” as it was then called. His open expression of this concern and his identification with the Puritans in many areas, offended William Laud, Archbishop of Canterbury; doubtless, this hindered his preferment in the church. At the same time, Adams was staunchly loyal to the king, and so found himself in disfavor with Cromwell and probably suffered being sequestered under the Commonwealth, left to live out his days dependent on charity in what he called, in the dedication of his posthumously published Anger and Man’s Comfort (1653), his “necessitous and decrepit old age.”

In 1629, Adams organized his sermons into a massive folio, subsequently printed in three volumes in the Nichol’s series reprint of 1861-1866. This was reprinted in 1998 by Tanski Publications as The Complete Works of Thomas Adams. Adams’s sermons have been admired since their first printing; they “placed him beyond all comparison in the van of the preachers of England, and had something to do with shaping John Bunyan…. His numerous works display great learning, classical and patristic, and are unique in their abundance of stories, anecdotes, aphorisms, and puns” (Encyclopedia Britannica, 11th ed., 1:181).

His fondness for evangelical allegorizing and verbal pyrotechnics, however, makes his sermons lively rather than weighty. His doctrine is unambiguously Calvinistic, but with a pastoral rather than a speculative or controversial orientation. He does not go deeply into the subject of Christian experience, but is warmly evangelical in extolling the power of Christ, and grace, and faith. The themes on which he is most constant and full, however, are the varieties of sin, the anatomy of hypocrisy, and the stratagems of Satan. Like all the Puritans, he is a thoroughly theocentric thinker, and says much that is illuminating on the ways of God in dealing with sinners in both mercy and judgment. He shows no sympathy with the Puritan program of church reform, but dismisses it as he does all forms of sectarianism and separatism. He is vigorously outspoken against Rome (The Encyclopedia of Christianity, ed. Edwin H. Palmer, 1:63).

Not included in Adams’s works, is his magnum opus, A Commentary on the Second Epistle General of St. Peter, an extensive commentary first published in 1633 and last reprinted by Soli Deo Gloria in 1990, and happily, reprinted again now by Solid Ground Christian Books. It was never included in any edition of his works. However, the 900 pages of double-columned print was edited by James Sherman and printed in London in 1839. The work is exegetically reliable and stylistically adept. Much useful theological knowledge is conveyed in striking phrases. Spurgeon commented that this book was the best Puritan commentary printed under James Sherman’s editorship. It was “full of quaintness, holy wit, bright thought, and deep instruction; we know of no richer and racier reading,” Spurgeon said.

This commentary is full of quotable material. For example, on 2 Peter 3:9 (“The Lord is not slack concerning his promise”), Adams writes, “Another cause of the Lord’s seeming slackness to deliver us for the present, is our slackness to praise him for deliverances past. Unthankfulness; this is the witch, the sorceress, whose drowsy enchantments have made us even forget God himself. If we forget him, can he be blamed for slackness to remember us?” (p. 688).

Adams is unsurpassed on Second Peter. Though the print is small, the content is rich, and is well worth patient perusal. Here is a feast for ministers and all serious Bible students.

Little is known of the latter part of Adams’s career. He appears to have written nothing for print during the last twenty years of his life. He died in 1652. Alexander B. Grosart wrote of him: “Thomas Adams stands in the forefront of our great English preachers. He is not as sustained as Jeremy Taylor, nor so continuously sparkling as Thomas Fuller, but he is surpassingly eloquent and brilliant, and much more thought-laden than either.”