One of the most prolific puritans of the day writing extensively on the Christian Life and National Covenant.

“Many wicked men know much theology. They can speak well but make no conscience effort to practice what they know.”

Puritan Publications is working to republish all of Mockett’s sermons and works.

1. “The Churches Troubles and Deliverance, or certaine Sermons tending to shew the Reasons why the Lord doth sometimes bring his People into extremities,” London [12 Aug.], 1642.
2. “The Nationall Covenant. Or a Discourse on the Covenant. Wherein also the severall parts of the late Protestation are proved to be grounded on Religion and Reason,” London [20 Aug. 1642], 4to.
3. “A View of the Solemn League and Covenant for Reformation, Defence of Religion, the Honour and Happynesse of the King, and the Peace, Safety, and Union of the Three Kingdoms,” London, 1644, 4to. The copy in the British Museum is dated in manuscript, 21 Sept. 1643.
4. “The Covenanters Looking-Glasse; discovering his duty and dignity, &c.; also an Epistle containing a relation of all the most principal things done in the Parliament of England, since their first sitting to the present day,” London, 1644, 4to.
5. “A New Catechisme,” London, 1647, 8vo.
6. “Gospel Duty and Dignity. A Discourse of the Duty of Christians, and their Priviledges by Christ,” London, 1648, 4to.
7. “Christmas, the Christians grand Feast: its Original, Growth, and Observation, also of Easter, Whitsontide, and other Holydayes modestly discussed and determined, also the beginning of the year & other things observable,” London, 1651, 4to.
8. “Christian Advice to Old and Young, Rich and Poor,” London, 1671, 8vo. Prefixed is a portrait of the author, engraved by Cross at the expense of Edward Brewster.

Thomas Mockett (or Thomas Mocket) (1602-1670), was a puritan divine, born in 1602, who attended as a student Queens’ College, Cambridge, July 4, 1622, and graduated with a B.A. in 1625, and an M.A. in 1631. He was incorporated in the latter degree at Oxford in July 1639 (see Mr. Wood, Fasti Oxon. ed. Bliss, i. 511). For some time he was chaplain to John Egerton, first earl of Bridgewater, president of the marches in Wales, by whom he was favored and promised preferment. He adopted puritan principles. In 1642 he was preacher at Holt, Denbighshire: and in or before 1648 he obtained the rectory of Gilston, Hertfordshire, on the sequestration of Christopher Webb, M.A., to whom he resigned the living on the Restoration in 1660 (see Clutterbuck, Hertfordshire, iii. 171, 173 n.). He was appointed by Parliament in the place of Webb. In 1646 he signed the petition of Herts ministers in favor of government according to the Covenant. The jurors appointed by the Commissioners to inquire touching Church livings in 1650 (Samuel Petchy and Joseph Foster), “do present that Mr. Thomas Mockett is parson of Gilston; ’tis a sequestered living, and the house, glebe, and tithing is valued to be worth about fourscore pounds per annum, out of which there is seven pounds per annum paid to Mrs. Webb.” He remained at Gilston until 1660, when he was ejected to make way for Webb, who was reinstated in this living as well as Sawbridgeworth, and held both till his death in 1669/1670. He was known as a godly, learned and orthodox divine. Edmund Calamy describes Mockett as, “a very pious, humble man,” and gives a list of his works. 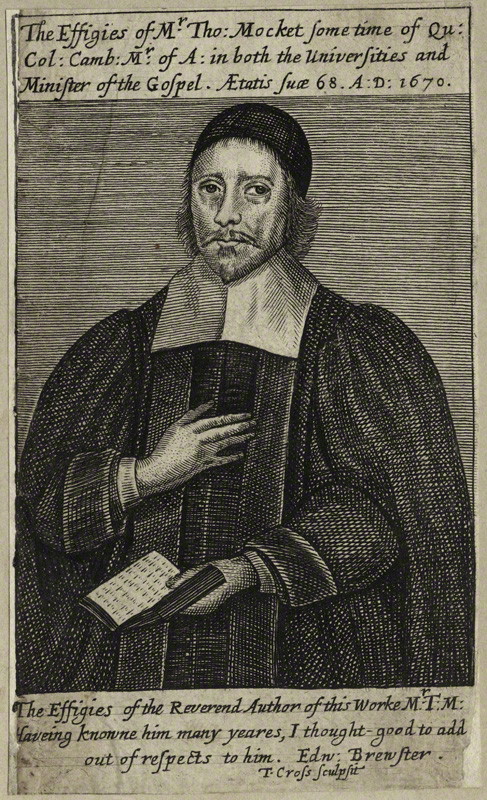