An Elizabethan Puritan of eminent skill. 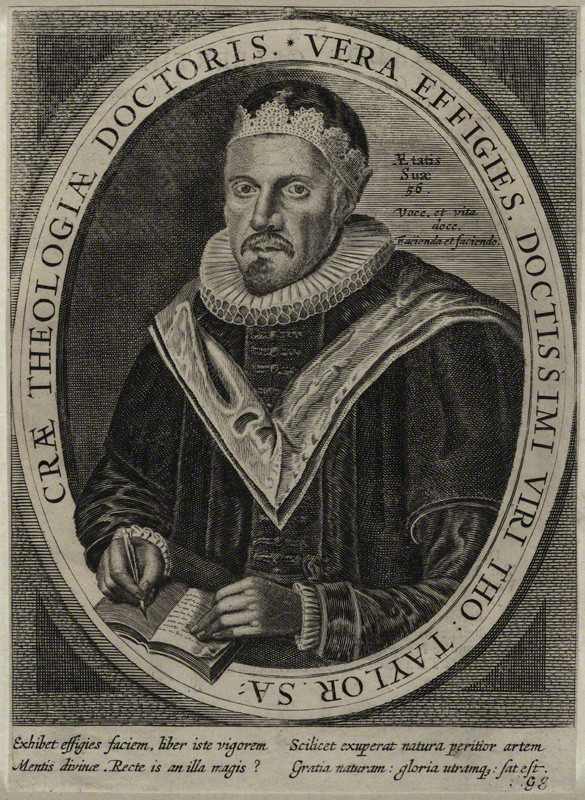 Thomas Taylor, D.D.—This excellent divine was born at Richmond in Yorkshire, in the year 1576, and educated in Christ’s college, Cambridge, where he was chosen fellow. He was the son of pious and worthy parents. His father was recorder of the town, and particularly kind and liberal to the ministers silenced for nonconformity, and the persecuted exiles from Scotland. Our divine had several brothers in the ministry. While at the university, his unwearied diligence and high attainments in good literature were manifest to all. He was, therefore, chosen fellow and Hebrew lecturer of the college. He at first , much opposed the puritans, as that sect which was every where spoken against; but afterwards espoused their cause, and became a sufferer with the rest of his brethren. He was for some time silenced, and threatened to be degraded, for a sermon which he preached in St. Mary’s church, Cambridge, from Canticles, v. 7. ” The watchmen that went about the city found me, they smote me, they wounded me; the keepers of the walls took away my vail from me.” That on which he chiefly insisted, and which gave offence to the ruling ecclesiastics, was, ” that in every age, some of those who ought to have been promoters of the church’s welfare, have been its persecutors.” How long he remained under the unjust censure, we have not been able to learn. In the year 1606, he was again silenced by Bishop Harsnet, for nonconformity. He was afterwards violently opposed and harassed by Bishop Wren, who [* Noble’s Memoir! of the Home of Cromwell, Voi. i. p. 93—95, 109. Wit. 1787. t Biog. Hilt. vol. li. p. 196.] used his utmost endeavours to hinder him from taking his doctor’s degree. He was willing to endure any sufferings himself, rather than that the truth and cause of God should suffer.* He was afterwards convened before the high commission, as a notorious delinquent, only for generously uniting with his brethren in promoting a private contribution for the poor afflicted ministers of the Palatinate, even after public collections failed: but it does not appear what further molestation he endured.t

Dr. Taylor, upon leaving the university, settled first.’ at Watford in Hertfordshire, then at Heading in Berkshire, and afterwards, in 1635, he became pastor of Aldermanbury, London. At each of these places his labours were made a blessing to many souls. During his abode at Reading, a generation of young preachers was raised up under his ministry, who afterwards became bright ornaments in the church of God.f He preached at Paul’s cross before Queen Elizabeth, and afterwards before King James. He spent thirty years in his beloved work, and continued faithful and laborious to the end. As the true servant of Christ, he was desirous to spend and be spent for the glory of God and the good of souls. With all sincerity and purity, and all zeal and meekness, he watched over the flock of Christ. His sermons were judicious, substantial, and ‘\dmirably well delivered. He was an avowed enemy to popery, arminianism, and antinomianism; against the last of which he published a work, entitled, ” The Use of the Law.” Though envy opposed him, real worth always admired him.

This worthy divine, when in the prospect of death, was desirous to have done more service for Christ; yet he was willing to obey the summons. Having finished the work which the Lord gave him to do, he was ready to depart, and to be with Christ. During his last sickness, he experienced much joy and peace in believing, and enjoyed a triumphant confidence in Christ as his gracious conqueror of death, and hell, and sin. ” Oh!” said he, ” we serve a good Lord, who covers all imperfections, and gives great wages for little work, and in mercy hath provided for me some of the greatest.” Having languished a short time under his complaint, he died in the beginning of the year [Life of Taylor prefixed to his “Works.” Edit. 1653. + Huntley Prelatei Usurpation, p. 164.] [J Newcourt Repert. Eccl. vol. 1. p. 918.—Clark’s Lives annexed to Martyrologie, p. 126.] 1633, aged fifty-fire years, and his remains were interred in St. Mary’s church, Aldermanbury. He was an indefatigable student, an excellent preacher, and eminently faithful, and additional comfort in being useful in the Lokis work. The welfare of his people lay near his heart . He was not so much concerned to gather tithes into his barn, as souls to Jesus Christ. He who was a guide to others, did not wander out of the way himself. He preached and practised righteousness. His life was particularly exemplary, his enemies being judges. His piety, his charity, and his moderation, were manifest to all.* Mr. Leigh calls him ” a solid and judicious divine.”+ Fuller, who has classed him among the fellows and learned writers of Christ’s college, Cambridge, says, ” he was exceedingly charitable, most strict in bis conversation, a grave divine, a painful preacher, and a profitable writer.”} Wood says, ” he was excellent in following and opening an allegory; and that he was highly esteemed by the London ministers, as well as by the people of his charge.” On account of his profound knowledge of the scriptures, he was commonly styled, ” the illuminated doctor.”^ He was, says Dr. Williams, ” a sound and sensible divine, and a very useful preacher; one who had penetrating views of the human eart, and of the oracles of God.”