A puritan preacher and theologian, and member of the Westminster Assembly.

“The Scriptures charge sin, perniciousness, and damnation upon heresy. Paul reckons them among those works of the flesh which shut persons out of the Kingdom of God (Galatians 5:20-21). Peter calls them pernicious and damnable, and such as bring swift destruction; and, speaking of the authors of them, he says that their damnation slumbers not (2 Peter 2:1-3).”

The Works of Obadiah Sedgwick available in old English:

5. The Shepherd of Israel, or, God’s Pastoral Care over His People. (389 pages) PDF Internet Archives
An exposition of Psalm 23. Also includes “The Doctrine of Providence.” 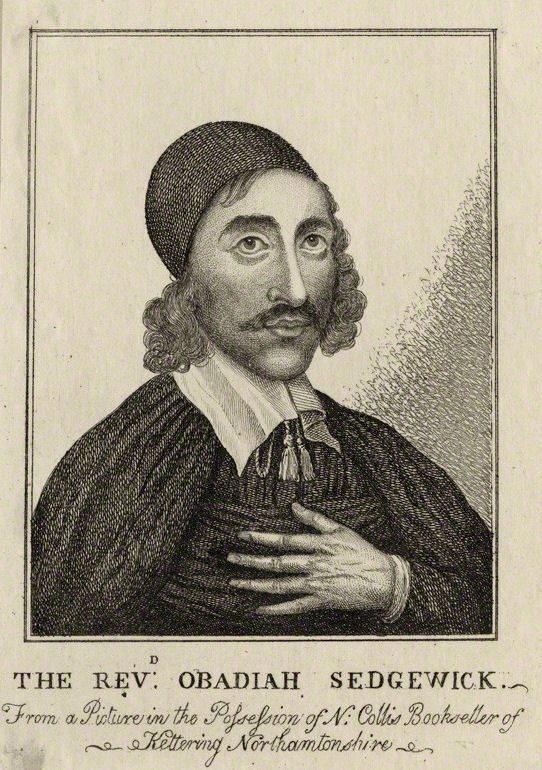 Obadiah Sedgwick (1600-1658), puritan divine, son of Joseph Sedgwick, vicar of St. Peter’s, Marlborough, Wiltshire, afterwards of Ogbourne St. Andrew, Wiltshire, was born at Marlborough about 1600. He matriculated at Queen’s College, Oxford, on 18 June 1619, aged 19, removed thence to Magdalen Hall, and graduated B.A. on 5 May 1620, M.A. 23 Jan. 1623. He was tutor (1626) to Sir Matthew Hale  Having taken orders, he became chaplain to Horatio, baron Vere of Tilbury , whom he accompanied to the Low Countries. Returning to Oxford, he commenced B.D. on 16 Jan. 1630. His first preferment (1630) in the church was as lecturer at St. Mildred’s, Bread Street, London, where his puritanism got him into trouble. On 6 July 1639 he was presented by Robert Rich, second earl of Warwick , to the vicarage of Coggeshall, Essex, in succession to John Dod. On the opening of the Long parliament he regained his lectureship at St. Mildred’s, and became a preacher against episcopacy. Wood says that he used ‘in hot weather to unbutton his doublet in the pulpit, that his breath might be the longer.’ In the autumn of 1642 he was chaplain to the regiment of foot raised bv Denzil Holles  He was a member of the Westminster Assembly (1643), and in the same year was appointed a licenser of the press. On 6 Oct. 1643 he spoke at the Guildhall in favour of the league with Scotland for the prosecution of the war, and his speech was published in ‘Foure Speeches,’ 1646, 4to. In a sermon of September 1644 he preached for ‘cutting off delinquents.’ He held for a short time the rectory of St Andrew’s, Holborn, on the sequestration (13 Dec. 1645) of John Hacket ; but next year (before May 1646) he was appointed to the rectory of St. Paul’s, Covent Garden, and resigned Coggeshall where John Owen (1616-1683)  succeeded him (18 Aug.) He was a member of the eleventh London classis in the parliamentary presbyterianism; but his ecclesiastical views were not rigid, for on 20 March 1654 he was appointed one of Cromwell’s ‘triers,’ and in August of the same year was a clerical assistant to the ‘expurgators.’ His health failing, he resigned St Paul’s in 1656, and was succeeded by his son-in-law, Thomas Manton  He was a man of property, being lord of the manor of Ashmansworth, Hampshire. Retiring to Marlborough, he died there at the beginning of January 1658, and was buried near his father, in the chancel of Ogbourne St. Andrew, A portrait of Sedgwick, engraved by W. Richardson, is mentioned by Bromley. By his wife Priscilla he had a son Robert, baptised at Coggeshall on 19 Oct. 1641, who was a frequent preacher before parliament, and published many sermons between 1639 and 1657.

John Sedgwick (1601?-1643), puritan divine, younger brother of the above, was born at Marlborough about 1601, entered at Queen’s College, Oxford, in 1619, removed to Magdalen Hall, was ordained deacon at Christmas 1621, admitted B.A. 6 Dec. 1622 (after four refusals, as he had used the title of the degree before obtaining it), proceeded M.A. 7 July 1625, B.D. 9 Nov. 1633 (incorporated at Cambridge 1638). After holding curacies at St. Botolph’s, Bishopsgate (London), Chiswick (Middlesex), and Coggeshall (under his brother), he obtained (1 April 1641) the rectory of St. Alphage, London Wall, on the sequestration of James Halsey, D.D. He was chaplain to the Earl of Stamford’s regiment. He died in October 1643, and was buried at St. Alphage’s on 16 Oct. His funeral sermon was preached by Thomas Case  He was twice married; his second marriage (1632) was to Anne, daughter of Fulke Buttery of Ealing, Middlesex, Wood cites a posthumous notice of him in the ‘Mercurius Aulicus,’ which says he had but one thumb, had been reprieved from the pillory in 1633, and was of bad character. He published four single sermons (1625-41), and ‘ Antinomianisme Anatomized,’ 1643, 4to.