The "silver-tongued" and the "politest" of all the nonconformists preachers.

“Precepts instruct us what things are our duty, but examples assure us that they are possible… When we see men like ourselves, who are united to frail flesh and in the same condition with us, to command their passions, to overcome the most glorious and glittering temptations, we are encouraged in our spiritual warfare.”

The works of William Bates or Collections Online in Old English:

The Whole Works of the Reverend William Bates, Volume 1. PDF Google Books
Memoir of the Author. By the Rev. W. Farmer, 1815.
Treatise on the Existence of God
Treatise on the Immortality of the Soul.
The Divinity of the Christian Religion.
The Harmony of the Divine Attributes, in the Contrivance and Accomplishment of Man’s Redemption by the Lord Jesus Christ

The Whole Works of the Reverend William Bates, Volume 2. PDF Google Books
Sermons on the Forgiveness of Sins, Psalm 130:4
The Sure Trial of Uprightness, Psalm 18:23
The Great Duty of Resignation, Matthew 26:39
The Danger of Prosperity, Proverbs 1:32
Spiritual Perfection Unfolded and Enforced, 2 Corinthians 7:1 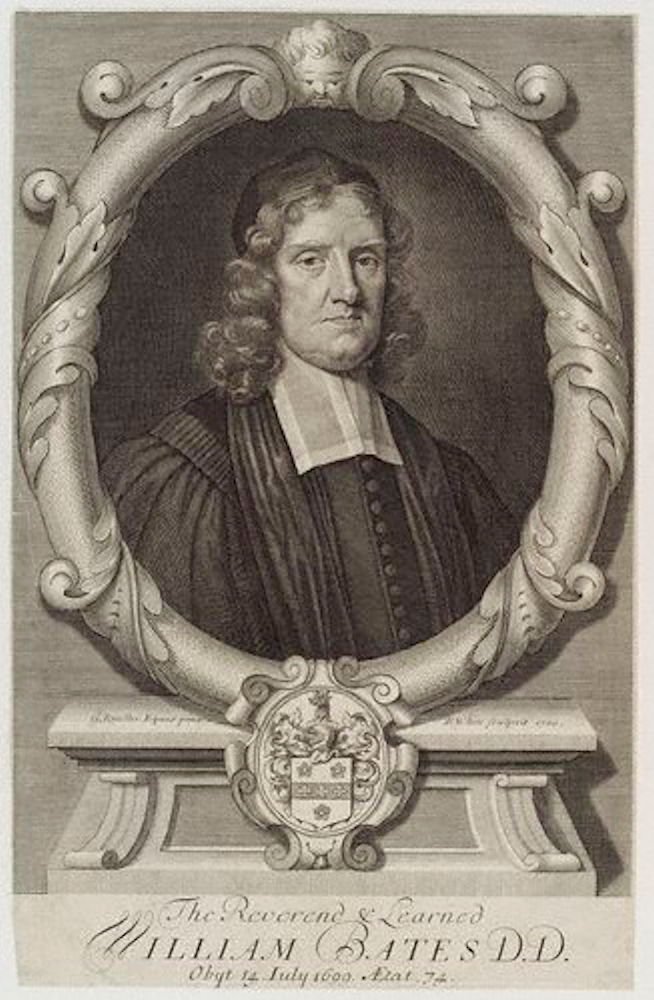 William Bates, D.D. (1625-1699), who has been called the ‘silver-tongued’ divine, was born in London in November 1625. All the authorities state that he was the son of a distinguished physician, author among other things of ‘Elenchus Motuum nuperorum in Anglia simul ac Juris Regii et Parliamentarii brevis Narratio’ (Paris, 1649; Frankfort, 1650). But the ‘Elenchus’ is by George Bate [q. v.]. Hence this paternity must be dismissed. Bates was educated at Cambridge, and was of Emmanuel College originally and of King’s College later (1644). In 1647 he proceeded B.A. He was a presbyterian. His first living was St. Dunstan’s-in-the-West, London, one of the richest in the church. Here he remained as vicar until the Act of Uniformity was passed, when he threw in his lot with the ‘two thousand’ of 1662.
Contemporaneously with his ministry at St. Dunstan’s, he united with certain of the ‘evangelical’ clergy in carrying on a lecture in Cripplegate church under the name of ‘Morning Exercise.’ In the negotiations for the restoration of Charles II, Bates took part. Royal favour came to him, and he was appointed one of the royal chaplains. In 1660 he acted as one of the commissioners of the abortive Savoy conference. In 1661 his own university (of Cambridge) conferred on him the degree of D.D. by royal mandate. At the same time he was urged to accept the deanery of Lichfield and Coventry, but like Baxter, Calamy, Manton, and others, he declined office of the kind. Later, Bates conducted the discussion between the nonconformists and Bishops Pearson, Gunning, and Sparrow. In 1665 Bates took the oath imposed by the parliament which met at Oxford ‘that he would not at any time endeavour an alteration in the government of church or state.’ In this he was supported by John Howe and Matthew Poole, although Richard Baxter refused it.

In 1668 some of the more moderate churchmen endeavoured to work out a scheme of comprehension. In this Bates, Baxter, and Manton co-operated. But the bishops marred all by their uncompromising attitude. A little later he joined in the presentation of a petition to the king for ‘relief of nonconformists.’ His majesty received him graciously, but nothing came of it. Again in 1674, under the conduct of Tillotson and Stillingneet, a fresh effort was made towards comprehension through Bates, but once more the bishops violently opposed it. After the accession of James II, the disabilities and sufferings of the nonconformists increased. Bates was at Baxter’s side when Jeffreys browbeat and insulted Baxter and his associates.

Of his private influence in ‘high places’ one evidence remains in his successful intercession with the archbishop (Tillotson) in behalf of Nathaniel, Lord Crewe, bishop of Durham, who had been excepted from the act of indemnity of 1690.

On the accession of William III and Mary, Bates delivered two speeches to their majesties in behalf of the dissenters. In the last years of his life he was pastor of the presbyterian church of Hackney. He died there 14 July 1699, aged seventy-four, having outlived and preached the funeral sermons of Baxter, Manton, Jacomb, and Clarkson.

His works issued ‘occasionally’ were first collected into a folio in 1700; the modern edition is in 4 vols. 8vo. They all treat theology practically. The chief of them are: 1. ‘Harmony of the Divine Attributes’ (1697). 2. ‘Considerations on the Existence of God and Immortality of the Soul’ (1676). 3. ‘Four Last Things–Death, Judgment, Heaven, and Hell’ (1691). 4. ‘Spiritual Perfection” (1699). 5. ‘Vitro Selectorum aliquot Virorum’ (London, 1681). As a preacher he was held to be the ‘politest’ of all the nonconformists. John Howe’s funeral sermon to Bates’s memory, printed with Bates’s works, remains his most durable monument.