One of Westminster divines, whose works are quite rare.
Today, many Christians are turning back to the puritans to, “walk in the old paths,” of God’s word, and to continue to proclaim old truth that glorifies Jesus Christ. There is no new theology. In our electronic age, more and more people are looking to add electronic books (ePubs, mobi and PDF formats) to their library – books from the Reformers and Puritans – in order to become a “digital puritan” themselves. Take a moment to visit Puritan Publications (click the banner below) to find the biggest selection of rare puritan works updated in modern English in both print form and in multiple electronic forms. There are new books published every month. All proceeds go to support A Puritan’s Mind.

The Works of Oliver Bowles available in old English (Puritan Publications is working to publish all of Bowles’ works): 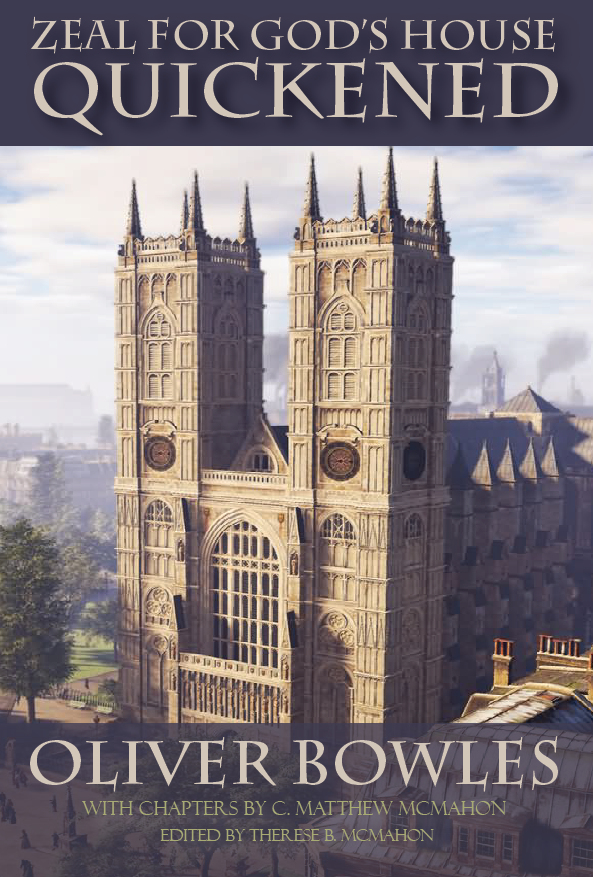 Oliver Bowles (1574-1644) B.D. This venerable divine was fellow of Queen’s college, Cambridge, where he most probably received his education. He was a man of great piety, an excellent scholar, and a celebrated tutor. The famous Dr. Preston was one of his pupils. Upon his removal from the university, he became rector of Sutton in Bedfordshire, about the beginning of the year 1607, where he continued upwards of fifty years. He was chosen one of the assembly of divines; when he constantly attended, and was very useful in that learned company. The assembly having petitioned the parliament for a fast, previous to its entering upon business, Mr. Bowles and Mr. Matthew Newcomen were appointed to preach before both houses and the assembly, and both sermons were ordered to be published. Mr. Bowles’s sermon is entitled, “Zeale for God’s House Quickened; or, a Sermon preached before the Assembly of Lords, Commons, and Divines, at their solemn Fast,” Julv 7,1643, in Abbey Church, Westminster: express” “Zeale required in Church-Reformers.” Mr. Bowles was author of a work entitled, ” De ftstore Evangelico,” 1649. Dr. Calamy denominates this an excellent book. It was published by his son, and dedicated to the Earl of Manchester. He adds, that it was “a Book not suffered to creep out in the time of the rampant episcopacy, not for any evil there is in it, but because some men do not care to be put upon too much work.”

Though Mr. Bowles survived the restoration many years it does not appear either to have conformed or to have been ejected; but, on account of his great age, and for several other reasons, there is the strongest probability to suppose that he gave over preaching about the year 1659 or 1660. He calmly resigned his soul into the hands of his dear Redeemer, September 5,1674, supposed to be upwards to of ninety years of age. He had twelve sons. His son was an ejected nonconformist. The excellent Mr. Timothy Cruso was favored with the friendship and counsel of Mr. Bowles. He attended him during his last illness, and received the following affectionate advice from him the day before his death. Have a care of yourself, Timothy, in this evil world; and be not so entangled with the vanities of it as to lose the substance for the shadow. Seeing you design yourself for the work and office of the ministry, I would advise you never to trouble your hearers with useless or contending notions but rather preach all in practical, that you may set them upon doing, and more advance a holy life. I would not any longer live that idle and unserviceable life which I have lately done; and therefore if God have some work for me yet to do here, he will continue me yet here: but if not I am sure there is better work for me in heaven, whereby I shall act for his praise and glory more.” When I took my last leave of him, says Mr. Cruso, he said, “Farewell Timothy; and if I see thee not any more in this world, (as indeed he did not,) I hope I shall in the next, which is better!” and so I hope also, replied Mr. Cruso. “Only remember,” continued Mr. Bowles, ” to keep a good conscience, and walk closely with God.” These last words he twice repeated with considerable emphasis, that it might make a deeper impression upon his mind.”