Westminster Divine and a puritan who wrote the best and most exhaustive work on the book of Job.

The works of Joseph Caryl:

A Directory for the Afflicted. (283 pages) PDF Google Books 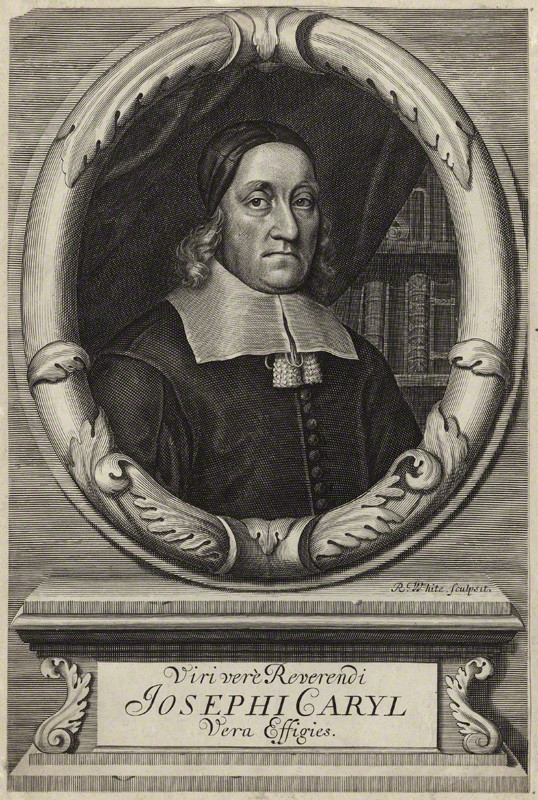 The following account of Mr. Caryl’s death, given in a letter written by Mr. Henry Dorney, and addressed to his brother, will probably be acceptable to the pious reader: “That famous and laborious minister of Christ, Mr. Joseph Caryl, your ancient friend and companion, has departed this life, aged seventy-one years. ‘His death is greatly lamented by the people of God throughout this city. About the beginning of his sickness I was with him, and he inquired concerning you as he was wont to do. Perceiving him to be weakly, though he did not then keep his chamber, I desired, while he was yet alive, to remember you in his prayers; which motion he cheerfully embraced. I visited him again about three days before his death. He told me, as I understood him, for being extremely weak, and past all hopes of life, his voice was low; that he had not forgotten his promise to me in your behalf. I think it good to mention this circumstance, in order to provoke you to all seriousness with regard to your, own soul, the eternal welfare of which lay so much at the heart of this eminent servant of Christ. His labors were great, his studies incessant, and his whole conversation without spot or blemish. His charity, faith, wisdom, and zeal, had a fragrant smell among the churches and servants of Christ, by whom his loss will be long lamented. His sickness, though painful, was borne with patience, joy, and peace in believing; so that he parted with time, and entered the harbor of eternity under the full sail of desire, and was wafted into port by a gentle breeze of divine consolation. When drawing near the close of life, he desired his friends to forbear speaking to him, that he might retire within himself; which time, they perceived, he spent in prayer, often lifting up his hands a little. His friends, observing that his hands had ceased moving, drew near, and found he had silently departed from them, leaving many a sorrowful heart behind.” Wood calls him a learned and zealous nonconformist. Dr. Calamy says, “He had universally the character of a learned man.” Neal and Palmer say, “That he was a man of great learning, piety, and moderation, a character which his writings abundantly manifest.” The Oxford historian informs us, “That several elegies were written on him after his death, two or three of which he had seen.” The summer after Mr. Caryl’s death, his congregation made choice of Dr. John Owen for their pastor, and united with those formerly under his charge and superintendence, among whom were several persons of rank in the army. In this united society, Dr. Owen was succeeded by the very learned Mr. David Clarkson, whose successor was Dr. Chauncey; after whom they made choice of the late celebrated Dr. Isaac Watts, for whom they built a new meetinghouse in Berry Street, near St. Mary Axe.