A Westminster Divine and prolific Puritan pastor and intellectual of his day.

“Without God and Christ religion is but an empty name, a pernicious error.”

The Works of Herbert Palmer available in old English (Puritan Publications is working to publish the remaining of Palmer’s works): 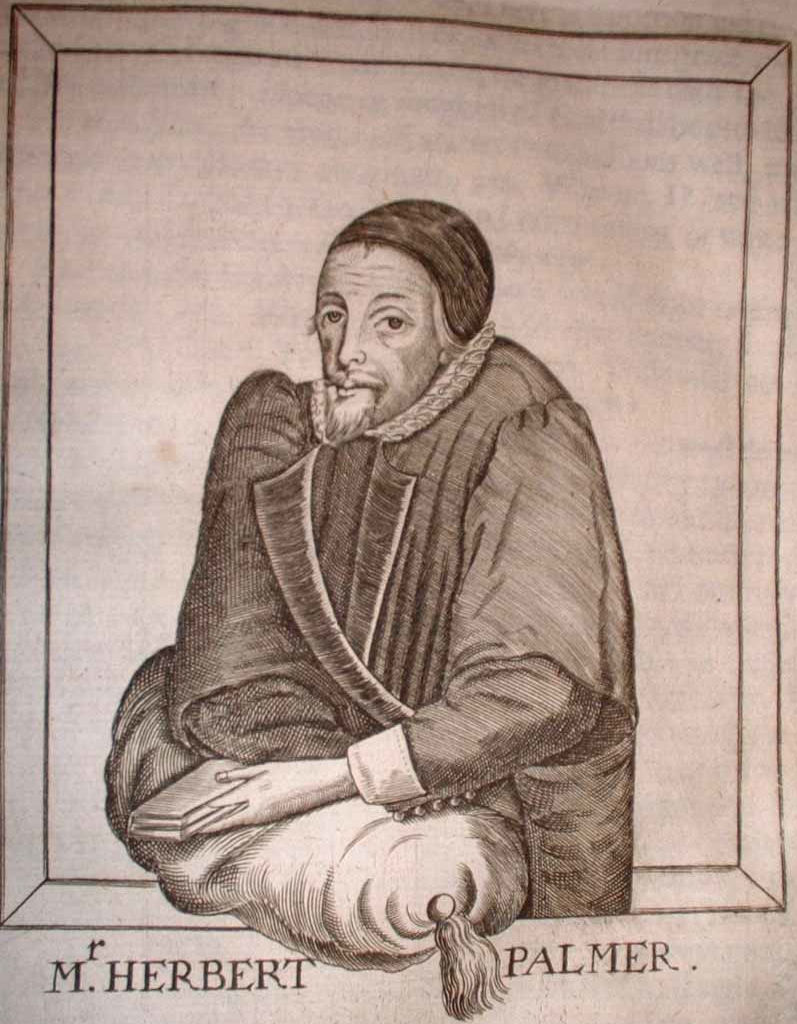 Herbert Palmer (1601–1647) puritan divine, younger son of Sir Thomas Palmer, knt. (d. 1625), and grandson of Sir Thomas Palmer (1540-1626)of Wingham, Kent, was born at Wingham in 1601, and baptised on March 29th. His mother was the eldest daughter of Herbert Pelham of Crawley, Sussex. He learnt French almost as soon as English, and always spoke it fluently. His childhood was marked by precocious religiousness. On March 23, 1616 he was admitted fellow-commoner in St, John’s College, Cambridge; he graduated with a B.A. 1619, and an M.A. in 1622, and was elected fellow of Queens’ College on 17 July 1623. He took orders in 1624, and proceeded to obtain a B.D. in 1631. In 1626, on his way to visit his brother, Sir Thomas Palmer, bart. (d. 1666), at Wingham, he preached at Canterbury Cathedral. The report of his sermon reached the ears of Delme, minister of the French church at Canterbury, who made his acquaintance at Wingham, got him to preach again at St. George’s, Canterbury, and made efforts to procure his settlement as lecturer. He was licensed by Archbishop Abbot for a Sunday afternoon lectureship at St. Alphage’s, Canterbury, but did not, as Clarke supposes, resign his fellowship. He acted as a spiritual adviser, being consulted as ‘a kind of oracle,’ and did much religious visiting, though without pastoral charge. Occasionally he preached to the French congregation; the first time he stood in their pulpit his diminutive appearance ‘startled an old lady, who cried out, ‘Hola, que nous dira cest enfant icy?’ Though not scrupling at the prescribed ceremonies, and strongly opposing the separatist party, he resisted the ‘innovations’ favoured by Laud. He was articled for his puritanism, but the prosecution proved abortive. About 1630 the dean, Isaac Bargrave, put down his lectureship, on the ground that he had gone beyond his office by catechising and that his lecture drew ‘factious persons’ out of other parishes; the lecture was revived in consequence of an influentially signed petition to Abbot. His friends, headed by Thomas Finch (d. 1639), afterwards Earl of Winchilsea, twice unsuccessfully endeavoured to secure for him a prebend at Canterbury. On the resignation of Thomas Turner, Laud, then bishop of London, presented him, at the instance of ‘a great nobleman,’ to the rectory of Ashwell, Hertfordshire; he was instituted 9 Feb. and inducted 18 Feb. 1632. Laud, on his trial, referred to this among other evidences of his impartial patronage of merit; he declined the religious ministrations of Palmer during his imprisonment in the Tower and at the block. In 1632 Palmer was made university preacher at Cambridge. At Ashwell he matured his system of catechising, giving prizes of bibles to those who could read, and 5s. to illiterates, on their reaching a proficiency which fitted them for admission to communion. Robert Baillie, D.D., reckoned Palmer ‘the best catechist in England.’ He originated the method of breaking up the main answer into preparatory questions, to be answered by ‘yes’ or ‘no.’ In 1633 he refused to read the ‘Book of Sports.’ He got his parishioners to bind themselves by subscribing a compact against drunkenness, sabbath-breaking, and so forth. He took sons of noblemen and gentry as boarders, under a resident tutor. Preaching a visitation sermon at Hitchin in 1638, he spoke freely against ‘innovations.’ In 1641 he was chosen, with Anthony Tuckney, D.D. [q. v.], clerk of convocation for Lincoln diocese. On 19 July 1642 he was appointed by the House of Commons one of fifteen Tuesday lecturers at Hitchin, Hertfordshire.

Palmer was appointed an original member of the Westminster assembly of divines by the ordinance of June 12, 1643. He removed to London, placing Ashwell in charge of John Crow, his half-brother, who became his successor (Sept. 28, 1647), and was ejected in 1662. On June 28, 1643 he preached a political sermon before the House of Commons, whose thanks he received through Sir Oliver Luke. He became preacher at St. James’s, Duke Place, and afterwards at the ‘new church’ in the parish of St. Margaret’s, Westminster (represented since 1843 by Christ Church, Westminster). He was also one of the seven morning lecturers at Westminster Abbey. On April 11, 1644 he was appointed by the Earl of Manchester master of Queens’ College, Cambridge, in room of Edward Martin, D.D.; in this capacity he was an able disciplinarian. Refugee students from Germany and Hungary were liberally assisted by him; he gave benefactions for the increase of the college library. In the Westminster assembly, of which he was one of the assessors (from January 1646), he had much to do with the drawing up of the ‘directory,’ and was anxious for a clause about pastoral visitation, which was not inserted. As regards ordination, he differed both from Presbyterians and independents, holding (with Baxter) that any company of ministers may ordain, and that designation to a congregation is unnecessary. He joined Lightfoot in pleading for private baptism. His chief work was in connection with the assembly’s ‘Shorter Catechism,’ though he did not live till its completion. To him was due the excellent method by which each answer forms a substantive statement, not needing to be helped out by the question.

He died in August or September 1647, and is said to have been buried in the ‘new church,’ Westminster; no register of the interments in that place is discoverable. There is an entry in the register of St. Mary the Less, Cambridge, not very legible, which has been read as giving 14 Aug. as the date of his burial there. Mr. W. G. Searle says he was present at an election of fellows on 17 Aug., and thinks he died on Sept. 11th; his successor was elected on 19 Sept. He was unmarried. His portrait, in Clarke, shows an emaciated visage, sunk between his shoulders; he wears moustache and thin beard, skull-cap and ruff with academic gown, and leans on a cushion. Symon Patrick, whom he befriended at college, calls him ‘a little crooked man,’ but says he was held in the highest reverence. He left a benefaction for poor scholars at Queens’ College.