An Early Elizabethan Silver-Tongued Puritan Preacher
Today, many Christians are turning back to the puritans to, “walk in the old paths,” of God’s word, and to continue to proclaim old truth that glorifies Jesus Christ. There is no new theology. In our electronic age, more and more people are looking to add electronic books (ePubs, mobi and PDF formats) to their library – books from the Reformers and Puritans – in order to become a “digital puritan” themselves. Take a moment to visit Puritan Publications (click the banner below) to find the biggest selection of rare puritan works updated in modern English in both print form and in multiple electronic forms. There are new books published every month. All proceeds go to support A Puritan’s Mind.

“Christ renewed the covenant, so he calls it a New Testament. It was renewed to Seth, Abraham, David, so now to us; refreshed.” 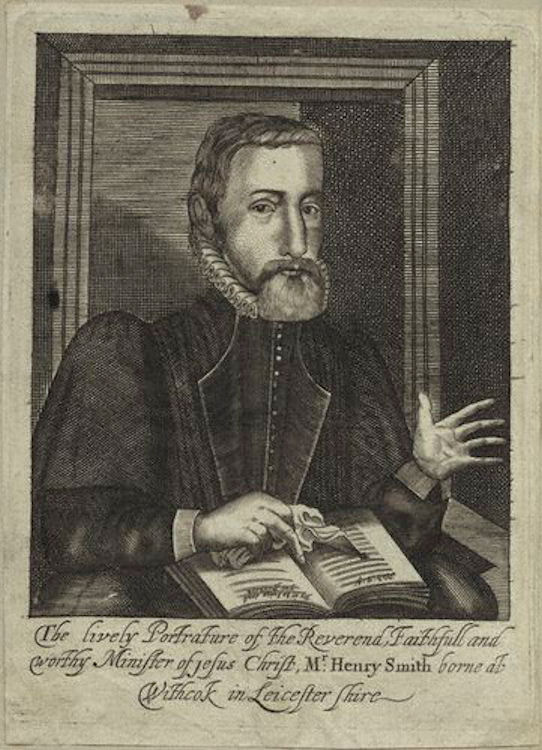 Henry Smith, who is described in Piers Penniless’s Supplication (1592) as Silver-tongued Smith, was a celebrated preacher in Elizabethan London at St. Clement Danes. On leaving Queens’ College, Cambridge, he continued his studies with Richard Greenham, rector of Dry Drayton, Cambridgeshire, who imbued him with Puritan principles as he did other leading men of the time. In 1575 he also entered Lincoln College, Oxford, graduating in 1579.

Though as the eldest son and heir of Erasmus Smith of Somerby and Husbands Bosworth, Leicestershire, he was heir-apparent to a large patrimony, he prepared to enter the Ministry of the Church, but, owing to conscientious scruples on the matter of subscription, he determined not to undertake a pastoral charge, but to content himself with a Lectureship.

Strype, in his Life of Bishop Aylmer, speaks of Smith as “ an eloquent and witty man who in 1587 became Reader or Lecturer at St. Clement Danes, at the desire of many of the parishioners, and by the favor of the Lord Treasurer who dwelt in the same parish and yielded contribution to him.”

Thomas Fuller also, in a Life of Henry Smith which he prefixed to the first Collected Edition of his works, said of him: “He was commonly called the Silver-tongued preacher, and that was but one metal below St. Chrysostom himself. His Church was so crowded with auditors that persons of good quality brought their own pews with them, I mean their legs, to stand thereupon in the alleys. Their ears did so attend to his lips, their hearts to their ears, that he held the rudder of their affections in his hands, so that he could steer them whither he was pleased.” Wood, too, tells us that Smith was “esteemed the miracle and wonder of his age, for his prodigious memory and for his fluent, eloquent and practical way of preaching.” (Athenae Oxon. 1:603). And in our own time Marsden, in his History of the Puritans, has described Smith’s Sermons as “noble examples of English prose and pulpit eloquence, and as being free in an astonishing degree from the besetting vices of his age—vulgarity and quaintness and affected learning.”

Owing to ill-health he resigned his Lectureship about the end of 1590, and retired to Husbands Bosworth, where he died the following summer, and was buried July 4th, 1591. (Some have his death at 1601).

The Calling, Rebellion and Punishment of Jonah and Other Sermons by Henry Smith – eBook
Buy the Print Book HERE