A devout Westminster Presbyterian puritan who published one of the most popular Christian works called "The Christian's Daily Walk."

“When you are alone, be sure that you are well and fully exercised about something that is good, either in the works of your calling, or in reading, or in holy meditation and prayer. For whensoever Satan doth find you idle, and out of employment in some or other of those works which God hath appointed, he will take that as an opportunity to use you for himself, and to employ you in some of his works.”

The Works of Henry Scudder available in old English:

1. The Christian’s Daily Walke in Holy Securitie and Peace. London, 1627.
2. God’s Warning to England by the voice of His rod: delivered in a Sermon preached at Margaret’s, Westminster, before the Honourable House of Commons, at their Solemn Fast, Oct. 30, 1644, from Micah 6:9. 4to. pp. 35. London, 1644.
3. A Key of Heaven: The Lords Prayer opened, and so applied, that a Christian may learne how to procure all things which may make for the glorie of God, and the good of himself, and of his neighbor. Containing…Doctrines of faith and godlinesse, etc. [With preface by R. Sibbes.] 12vo. London, 1620. 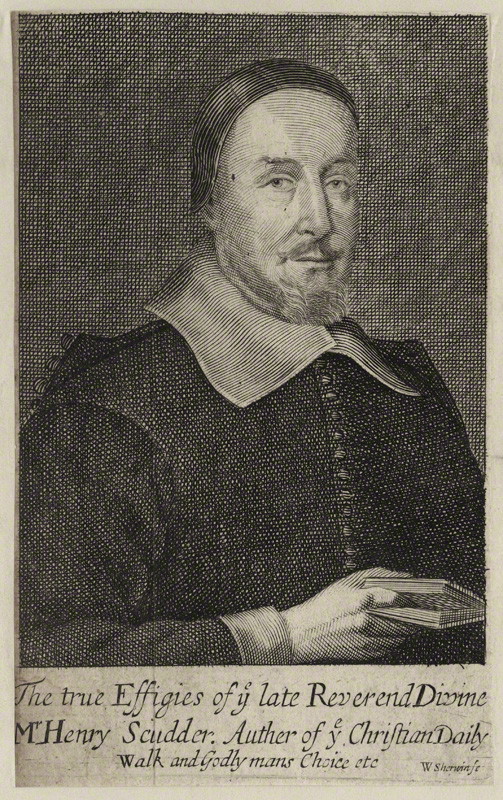 Henry Scudder, B.D.(d. 1659) — This excellent minister of the Gospel was educated in Christ’s college, Cambridge, and afterwards minister at Drayton in Oxfordshire, where, on account of his exemplary piety, great prudence, and excellent ministerial labors, he was highly esteemed. Afterwards he became minister of Collingborn-Dukes in Wiltshire; and, in the year 1643, was chosen one of the assembly of divines, when he constantly attended. Fuller has placed him among the learned writers of the above college; and Granger denominates him “an eminent presbytcrian divine.” He was author of an excellent work, entitled, “The Christian’s daily Walk in Holy Security and Peace.” It passed through numerous editions, and is held in high repute among serious christians in the present day. Mr. Baxter and Dr. Owen prefixed to it their recommendatory epistles. The former says, “I remember not any book which is written to be the daily companion of christians, to guide them in the practice of a holy life, which I prefer before this: I am sure none of my own. For so sound is the doctrine of this book, and so prudent and spiritual, apt and savoury, and all so suited to our ordinary cases and conditions, that I heartily wish no family may be without it.” The latter says, “There is generally that soundness and gravity in the whole doctrine of the book, that weight of wisdom in the directions given for practice, that judgment in the resolutions of doubts and objections, that breathing of the spirit of holiness, zeal, humility, and the fear of the Lord, in the whole; that I judge, and am satisfied therein, that it will be found of singular use unto all such as in sincerity desire a compliance with his design.” This work was in so high a repute, that it was translated into high Dutch, by the learned Mr. Theodore Haak.

Scudder also published: 1. ‘A Key of Heaven: the Lord’s Prayer opened and applied,’ 1682, 12mo; dedicated to ‘Mr. Thomas Crew, and to all his hopefull children,’ and has a preface by R. Sibbs of Gray’s Inn, who describes it as ‘written without affectation.’ 2. ‘Prototypes, or the Primarie Precedent Presidents out of the Booke of Genesis. With Mr. Whatelye’s Life and Death,’ 1640, fol., and 1647. Here Scudder had the assistance of Edward Leigh [q. v.], who was, like himself, one of Whately’s executors. A portrait of Scudder was engraved by Sherwin in 1674.