A deeply thoughtful Presbyterian puritan, popular in his day, and an active preacher.

“You may be a hypocrite — and may not know it. You must put on gospel eyes to try hypocrisy in your own hearts. ”
“Christ’s righteousness is imputed, and we are accounted holy by it.”
“The Holy Spirit is the best expositor of his own commands.” 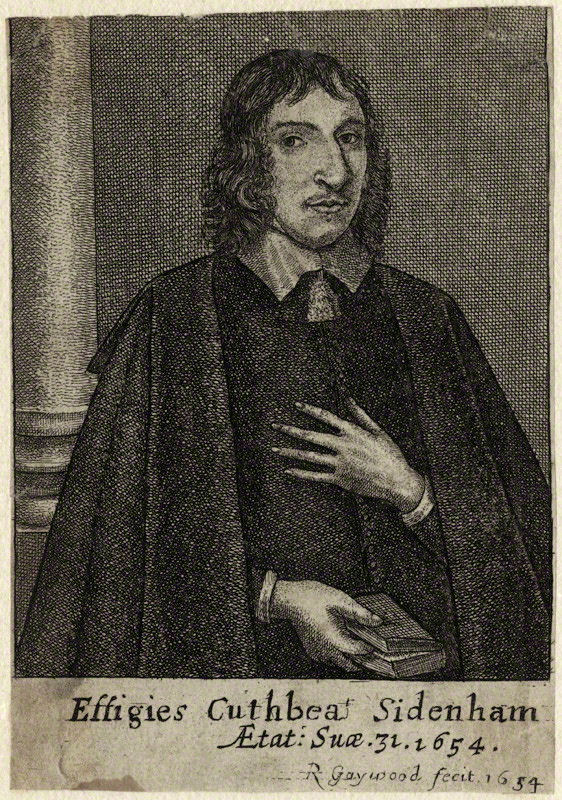 Cuthbert Sydenham (or Sidenham) (1622–1654), theologian, born at Truro, Cornwall, in 1622, was the fourth son of Cuthbert Sydenham (d. May 8, 1630, aged 64), woollendraper at Truro and mayor of that borough in 1627. He was probably educated at Truro grammar school, and he became commoner of St. Alban Hall, Oxford, in the Lent term of 1639. When the city was garrisoned for the king, he seems to have withdrawn to Newcastle-on-Tyne.

Sydenham, according to Anthony à Wood, received ordination from the Presbyterian divines. He officiated for some time as lecturer at St. John’s, Newcastle, and on May 30, 1645 was appointed the senior of the two lecturers at the church of St. Nicholas in that borough, with a stipend of 100l. per annum.

On July 5, 1647 he was settled as the sole lecturer in that church on Sunday afternoons at the same salary; but on April 5, 1648 it was raised to 140l. per annum. The parliamentary committee for regulating the university sent letters to the members of convocation lauding his abilities, and bearing witness to his service to their cause, and on March 8, 1650–1651 he was given an M.A. On Nov. 22, 1652 Sydenham was appointed master of St. Mary Magdalen Hospital at Newcastle. He was in delicate health, and in hope of improvement came to London, lodging in Axe Yard, adjoining King Street, Westminster, where he died about March 25, 1654. He was “a genteel, comely personage,” with an “aquiline” nose, and in the pulpit was “a very Seraph.” He married a daughter of the Rev. Sidrach Sympson. A portrait (1654) of Sydenham, “æt. 31”’ and in a cloak, was painted by Gaywood, and prefixed to the editions of his “Hypocrisie Discovered,” (Granger, Biogr. Hist. iii. 45).

The views of Sydenham on infant baptism were attacked by the Rev. William Kaye of Stokesley and the Rev. John Tombes. Addresses by him were prefixed to Roger Quatermayne’s “Conquest over Canterbvries Court” (1642), and the Rev. Nicholas Lockyer’s “Little Stone out of the Mountain” (1652).

A Gospel-Ordinance Concerning the Singing of Scripture Psalms, Hymns and Spiritual Songs by Cuthbert Sydenham (or Sidenham) – eBook
Buy the Print Book HERE

The Works of Cuthbert Sydenham (1622–1654) available in old English (Puritan Publications is working to publish all of Sydenham’s works):

Sydenham was the author of:

1. “An Anatomy of Lievt.-col. John Lilbvrn’s Spirit and Pamphlets, or a Vindication of the two honourable Patriots, Oliver Cromwell and Sir Arthur Haslerig,” 1649.
2. “An English Translation of the Scottish Declaration against James Graham, alias Marquess of Montrose,” 1650.
3. “The False Brother, or the Mappe of Scotland, drawn by an English Pencill,” 1650. For his “good services” in writing these tracts the sum of 50l. was voted to him by the council of state on 10 Jan. 1649–50 (Cal. of State Papers, p. 476).
4. “The false Jew, or a wonderfull Discovery of a Scot. Baptised for a Christian, circumcised to act a Jew, rebaptised for a Believer, but found to be a Cheat” (i.e. Thomas Ramsay), 1653; signed by Sydenham and others.
5. “A Christian, Sober, and Plain Exercitation on the two grand practicall Controversies of these Times; Infant Baptism and Singing of Psalms,” 1653; he was in favour of both practices, but against organs and harps.
6. “Greatness of the Mystery of Godliness,” 1654; reproduced 1657 and 1672.
7. “Hypocrisie Discovered,” 1654. A posthumous production, dedicated by Thomas Weld and others to Sir Arthur Hesilrigge.