An Attendee of the Westminster Assembly as a Member of the House of Commons.

“I desire that we consider the increase of Arminianism and Error that makes the grace of God look after the will of men. [It] makes the sheep to keep the shepherd, and makes a mortal seed an immortal God. I desire that we may look into the belly and bowels of this Trojan Horse to see if there is any man in it, ready to open the gate of Romish tyranny, and Spanish monarchy. For Arminianism is the span of a papist, and if there comes the warmth of favor, you shall see him turn into one of those frogs that arise out of the bottomless pit. And if you mark it well, you shall see an Arminian reaching one hand to a papist, a papist to a Jesuit, a Jesuit to the Pope, and the other to the King of Spain. And these men having kindled fire in our neighbor-countries, now they brought some of it over here, to set on flame this kingdom also. Yes, let us consider and search whether these are not the men that break in on the goods, and liberties of the Commonwealth. For by this means they may make way for the taking away of our Religion,” (A Religious and Worthy Speech Spoken by Mr. Rous in Parliament (London, 1641)). 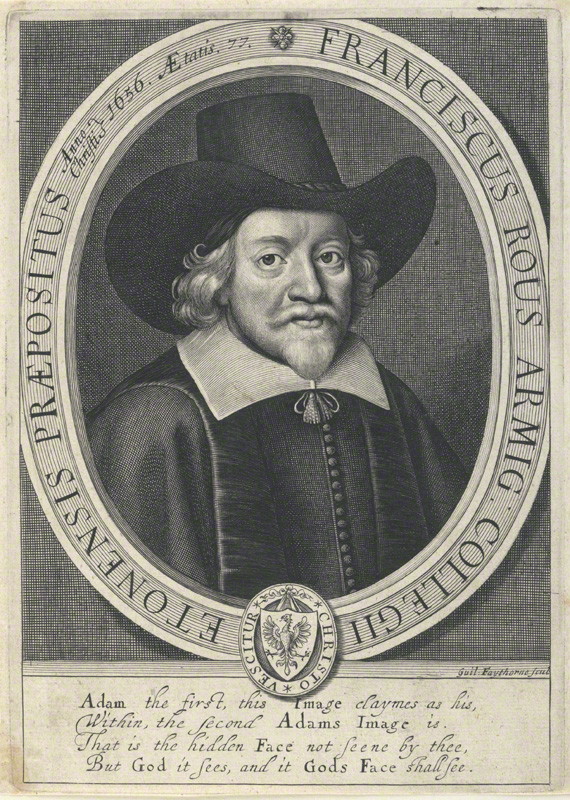 As it stands today, there is no full biography of Mr. Francis Rous (1579–1659). What we know of him comes from fragments in Cornwall, Eton and documents surrounding the House of Commons. He was a puritan, the son of Sir Anthony Rous of Halton St. Dominick, Cornwall, by his first wife, Elizabeth, daughter of Thomas Southcote. He was born at Dittisham, Devonshire, in 1579. He attended Broadgates Hall, Oxford, and graduated with a B.A. on January 31, 1596-7. While little is ever spoken about concerning the next college he attended, Rous also graduated at the University of Leyden on February 10, 1598-9. In 1601 he went to Landrake, Cornwall, to occupy himself with intense theological study. He wrote three works of note that stemmed from this time of spiritual study. First, “Meditations of Instruction, of Exhortation, of Reprofe: endeavouring the Edification and Reparation of the House of God,” London, 1616. Next came, “The Art of Happiness, consisting of three Parts, whereof the first searcheth out the Happinesse of Man, the second

particularly discovers and approves it, the third sheweth the Meanes to attayne and increase it,” London, 1619 (also edited in 1631). Then two works followed: “Diseases of the Time attended by their Remedies,” 1622, and “Oil of Scorpions,” in 1623. With these works he was established among the puritans with a reputation of being a sound puritan divine.

In 1626 he wrote a reply to Richard Montagu’s work, “Appello Caesarem,” titled “Testis Veritatis. The Doctrine of King James, our late Soveraigne of Famous Memory, of the Church of England, of the Catholicke Church plainly shewed to be one in the points of Predestination, Freewill, Certaintie of Salvation. With a Discovery of the Grounds both Natural and Politicke of Arminianisme,” London. (See the quote above.) He then wrote an exhortation to the nation at large, called, “The only Remedy that can Cure a People when all other Remedies Faile,” London. Later he further distinguished himself by his passionate writings on Dr. Roger Manwaring’s Arminianism, and popery.

In the Long parliament Rous opened the debate on the legality of Laud’s new canons as the practical Calvinist on December 9, 1640, and presented the articles of impeachment against Dr. Cosin on March 15, 1640-1. When the Westminster Assembly convened on June 12, 1643, he was nominated as one of its lay assessors, and on September 23rd he took the covenant (RUSHWORTH, Historical Collections, pt. iii. vol. ii. pp. 337-480). On Feb. 10, 1644 he was appointed provost of Eton College. He was also chairman of the committee for ordination of ministers constituted on October 2nd.

At the outset, Rous had been a staunch adherent to Presbyterianism (at least most considered him as such), but in 1649 he changed his view to Independency and went to that party. In Ballie’s Letters (2:97), Ballie himself states that by 1645 Rous had defected to the “sectaries.” But there is still some debate that Rous remained a “tolerant Presbyterian,” which would have placed him at odds with the rigid Presbyterians (such as Samuel Rutherford, Thomas Edwards and Ephraim Pagitt). In February to March 1651-1652 he served on the committee for propagation of the gospel, and framed a polity for a state church on with congregationalism in mind, though it failed politically. It was again resuscitated by the Little parliament, of which he was speaker (July 5 to December 12 1653). Yet again, it did not meet with success. At that assembly, Rous was sworn as the Protector’s council of state. On March 20th 1653-4 he was placed on the committee for approval of public preachers. He was also appointed to a committee on April 9, 1656 to discuss the question of the kingship with Oliver Cromwell, by whom he was created a lord of parliament in December 1657. Rous died at Acton and was buried on January 24, 1659, at Eton College chapel. Portraits of him are at Pembroke College, Oxford, and Eton College (cf. Catalogue First Loan Exhibition at South Kensington, p. 132). An engraving by Faithorne is prefixed to the 1657 edition of his “Treatises and Meditations.” By his will, dated March 18, 1657-8, he founded three scholarships at Pembroke College.

A point of some contention with Rous’ experimental piety was of his subjectivism in his works, “Mystical Marriage: or Experimental Discourses of the Heavenly Marriage betweene a Soule and her Saviour,” London, 1635 and his, “Heavenly Academic,” London, 1638. These works were published in a collected edition of his, “Treatises and Meditations,” London, 1657.

Other works by Rous, all of which appeared in London, are the following:

The Art of Happiness by Francis Rous (Puritan Publications is working on publishing Rous works.)
Buy the printed book HERE.

He was a versifier of the Psalms. His translation, with some modifications, was adopted by the Church and Parliament of Scotland for use in public worship, a position which it held almost exclusively until the middle of the 19th century. 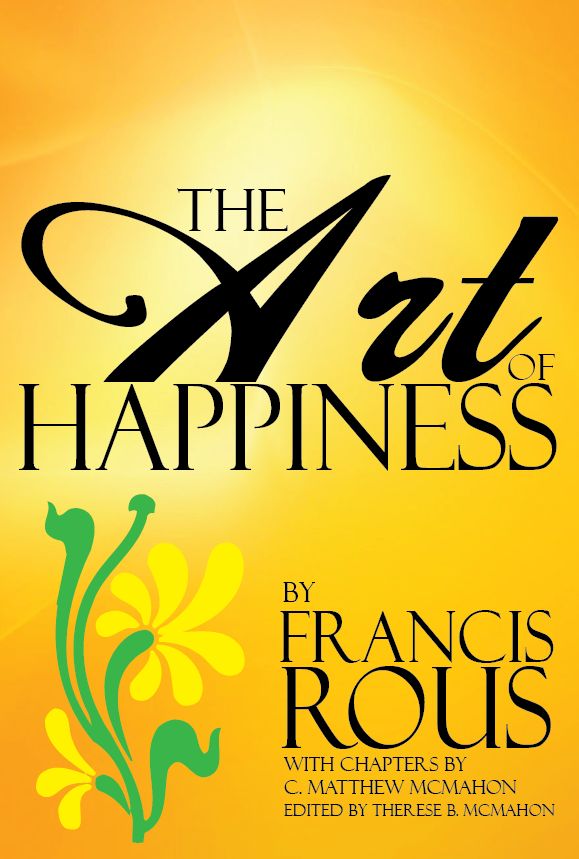