One of the most popular puritans of his day, though his works are rare.

“God chooses to magnify his grace on us, who are not only rebels, but most unkind and treacherous creatures all along.” 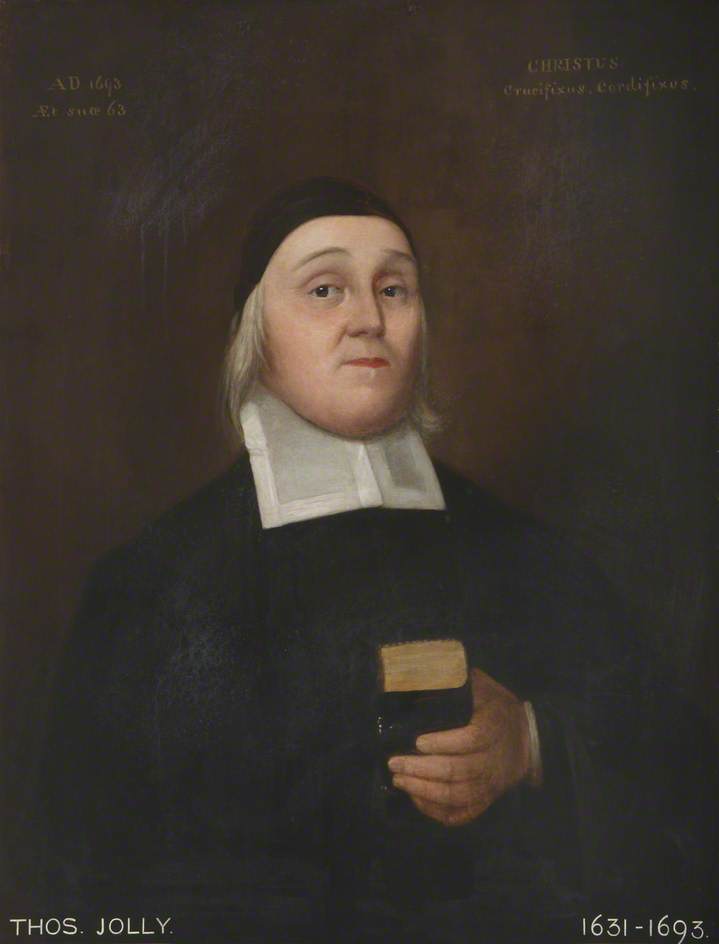 Thomas Jollie (1629-1703) is one of those puritans who is relatively little known, but ought to be better known. God’s use of this man still reaches into the church today as we look to see the wisdom that he preached and penned from Christ’s holy word for the good of the people of God.

Jollie was born of pious parents and was blessed with a religious education. His parents sent him to Trinity College, Cambridge, after he had religious convictions concerning salvation and Jesus Christ at a very young age. He was, “brought into a greater knowledge concerning things of the Spirit,” during his learning there, and such convictions grew and abounded. He said, “Though my parents and education were pious, yet you little know what an abominable spirit did lurk and work in me under all. The Lord provided for my subsistence in Cambridge. He had been dealing with my conscience before, but there more fully. I had a zeal to the ordinances and for the cause of God; but much of it was common fire and not fire of the sanctuary. I had an inclination to the ministerial office, but there was too much precipitancy, in my coming from the academy and entering upon that work, being raw in years and rude in parts, and but poorly principled and furnished for such an employment. My own unfitness, and the greatness of the work were much hid from me.” This occurred in conviction around 20 years old. After his conversion he was called to Althome where he ministered with his brothers for the good of the Gospel.

After this, he was unanimously invited by the people, to accept the pastoral office there. God was pleased to crown the labors of his servant here with his blessing, especially at the commencement. After a few years, he met with some degree of opposition, as most ministers do in some form or another, by attempting to establish a degree of discipline in the church.

The ardent spirit of Thomas Jollie could not be confined within the narrow limits of his particular charge at Althome. He also ministered in the surrounding counties and willingly cooperated with his brethren in the ministry to promote the increase of spirituality among their respective charges in the adjacent counties. At their desire, he wrote a piece, entitled, “Evil tidings,” concerning the Lord’s withdrawing His presence, its causes, and such, and the substance of this he delivered in a discourse before the Savoy assembly in 1685. From that time on he became a public character in the churches employed in recommending ministers to destitute congregations, assisting at ordination, settling deputes, and striving to promote peace and union among those of different church order, but who agreed in the faith of the gospel.

Jollie suffered for Nonconformity. What he endured for conscience sake, during twenty years, will appear from the following narrative, drawn up by himself.

“Through the good hand of God upon me, I was brought to Altham, in the hundred of Blackburn, in the county of Lancaster, with the unanimous consent of the people; and there blessed with good success in my ministry, for the conversion of many souls, until the year 1660; then the persecution against me began, merely upon the account of my nonconformity, before the last act of uniformity.” “My first trouble was upon the 22nd of November 1660, by a warrant from three deputy-lieutenants, who brought me to Preston. There captain Nicholas Bannister of Altham brought me before the deputy- lieutenants, charging me with many things, mostly unjustly; and they put the path of Supremacy upon me, who was never suspected to be popishly affected. The design of the said captain Bannister, with other debauched young gentlemen of the country, failed in the aforesaid particular. Upon the 15th of February, following, I was taken prisoner again by some of their soldiers, and detained for some time, to my great grievance and damage, in regard of the desolate condition and bitter lamentation to my people, the extremity of the weather, and the rude carriage of my guard. Being set at liberty, I was upon the 7th of March following, violently shut out of the public place by the said captain Bannister against whose illegal violence, when I sought relief from the Lord-lieutenants, I could get none.” Such trials Jollie would endure time and time again for his preaching. Year after year he was accused and tried of being in some way illegal, then held against his will for a considerable time, then freed. He was over and over accused of false claims and the magistrates attempted to revoke his ordination, but at every turn the Lord was with him. When the five-mile-act was given he was forced to be removed from among his friends, where he became ill and had terrible pains and sufferings. He was even given a warrant to be banished from the three kingdoms. Reputable friends rescued him from this and sent him to another part of the country to reside in some form of peace. He was fined a number of times with monies beyond his means, and his goods were taken, where again, he would have to rally his people behind him in order to gain them back.

The remainder of his days appear to have been spent in peace. He lived to see the dawn and progress of religious freedom in this country; and in 1688, that ever memorable year, built a place of worship on part of his own estate at Wymond houses, near Clithero, where he continued to labor to his death. On the outside of the building is this inscription, “Luke 7:5, “For he loveth our nation and he hath built us a synagogue.” Adjoining this place of worship is the house which Mr. Jollie built, and in which he lived and preached after his ejectment from Althome.

The character of Mr. Jollie was such as every Christian minister should strive to attain. He was very serious and exemplary, both in his private and public conduct, and was not ashamed of being called a Puritan. He was steadfast to his principles of faith and practice. This sometimes exposed him for a season to the shiness of friends, and the determined opposition of enemies; but he would rather endure any outward troubles, than the inward distractions of an accusing conscience. His natural and acquired abilities were of no mean standard; they were diligently improved by application, and sanctified by the Spirit of God to the good of men’s souls. Like many of the pious nonconformists he excelled in prayer, and was frequent in observing days of fasting and self-examination. His sermons were well studied, full of sound divinity and evangelical experience, and admirably adapted to promote real religion in the souls of his hearers. They were delivered with much energy and affection, were frequently watered with many tears, and were made exceedingly useful to arouse the careless sinner and comfort the distressed believer. His sentiments of church government were Congregational or Independent; but he was no bigot, he loved all those, “that love our Lord Jesus Christ in sincerity.” His superior abilities, active spirit, and humble deportment, raised him to a high degree of esteem and influence in the churches of Christ, which he directed to the general good and the glory of God. The veneration in which he was held by those who knew his worth increased with his age, and his death was deplored as a great loss. His friends had this consolation, that he left behind him a son who possessed much of his father’s spirit. This was Mr. Timothy Jollie, who acknowledged Mr. Oliver Heywood as his spiritual father, was ordained at Sheffield April 25th, 1681, in very threatening times, and was very successful in training up young men to the work of the ministry in the academy at Attercliff.