One of the most well-respected Preachers of the day and esteemed by Jonathan Edwards.

“Heaven is where the unveiled glories of the Deity shall beat full upon us, and we forever sun ourselves in the smiles of God.”

1. The Doctrine of the Two Covenants
2. The Almost Christian (Some people would stigmatize him as a legal writer. But what is a legal writer? He who attributes to nature, the power of doing the will of God, and to man any proper merit before God. Bishop Hopkins was not of this class;—he adopted those views which most easily reconcile the declarations of scripture with its exhortations—he insisted on the obligation of man to do the will of God, and condemned him for his disinclination. He addressed man as a rational and responsible creature; and urged him to exert all his faculties to obey every impulse of the Divine Spirit:—but he ascribed all effectual and saving influence to that Spirit, and all merit and glory, to Jesus Christ.
3. The Vanity of the World
4. A Practical Exposition on the Lord’s Prayer
5. A Catechism on the Lord’s Prayer
6. A Practical Exposition of the Ten Commandments
7. Three Discourses on the Law
8. Three Discourses Concerning Sin
9. A Treatise on Regeneration
10. The Doctrine of the Two Sacraments
11. The All Sufficiency of Christ
12. The Excellence of Heavenly Treasures
13. Practical Christianity
14. The Assurance of Salvation
15. On Glorifying God in His Attributes
16. The Almost Christian Discovered
17. The Nature, Corruption, and Renewing of the Conscience
18. The Great Duty of Mortification
19. Death Disarmed of its Sting
20. Fifteen Miscellaneous Sermons 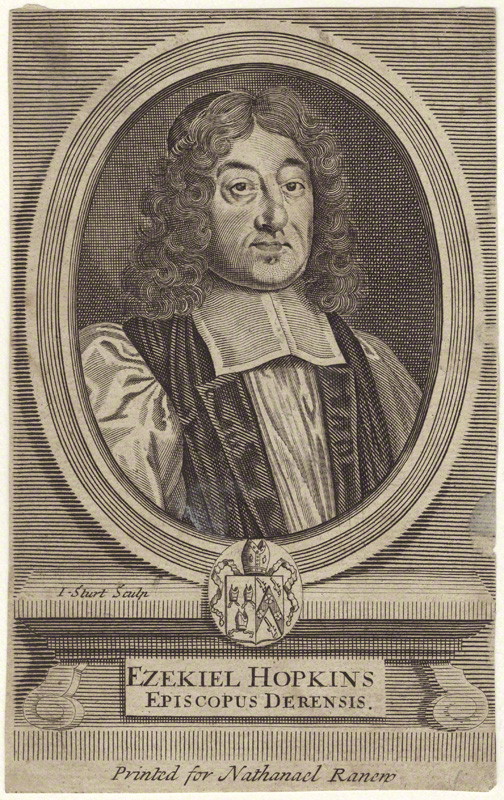 Ezekiel Hopkins (1633-1690), was born about the year 1633, at Sandford, Devon, of which place his father was the minister. The precise date of his birth has not been ascertained. In 1649, he was sent to Oxford, and became a Chorister in Magdalen College. Having taken his degree of B.A. in 1653, and that of M.A. in 1656, the College elected him their Chaplain. After performing the duties of that office in a pious and studious manner for four years, he went to London, where he soon became cele¬brated as an eloquent preacher—for some time he assisted Dr. William Spurstowe of St. John’s, Hackney.

During his residence in the metropolis, Mr. Hopkins married a niece of Alderman Sir Robert Viner. She was a lady of singular piety, but was soon snatched from him by the hand of death. After a lapse of some years, he again entered the marriage state with Lady Araminta, daughter of die Earl of Radnor, Lord President of the Council.

About the year 1666, Mr. Hopkins returned to his native county, and was chosen minister of St. Mary Arches in the city of Exeter. In 1669, Lord Radnor, being appoint¬ed Lieutenant of the kingdom of Ireland, took Mr. Hopkins with him as Chaplain, and early in the next year, gave him the Deanery of Raphoe.

Lord Radnor was succeeded in the government of Ireland by Lord Berkeley, who in 1671, conferred on Dr. H., the Bishopric of Raphoe. For ten years he filled that episcopal chair with honor, and was then translated to the see of Londonderry. In that pulpit he was a constant preacher. By humble courage and prudent moderation he regained many dissenters to the communion of his church, convincing them that her doctrines were pure and apostolic. By strong reasoning and argument he won many to Christ. He preached powerfully not only in the pulpit, but also in his private practice. He was truly a burning and shining lights and his unblameable conversation was greatly influential on all who knew him. Here he labored for about seven years, till the state of the kingdom obliged him to provide for his safety by escape.

He arrived in London 1688, and for a while indulged the hope that the disturbances would soon subside, but, finding that they were likely to continue, he resolved to seek some employment proper to his function. In September, 1689, he was elected minister of St, Mary, Aldermanbury. Here he appeared to be settled; but his mind had been so affected, and his body weakened, by the public disturbances and his private calamities, that after eight months, he was reluctantly obliged to resign this engagement.

He spent his last days in self-examination, repentance and prayer, and when death approached, he had such inward peace and anticipation of bliss, that a speedy departure was his earnest petition. His prayer was heard — God took him from the troubles of this life—summoned him to join the assembly of the blessed, and changed his earthly mitre for a crown of eternal glory.