A Westminster Puritan and powerful preacher who wrote on Systematic Theology and the covenant.

“Crying sins are commonly answered with the echo of roaring judgments. Our most secret sins are, in reference to God, no more secret, in regard to omnipresence, than if committed in open light. True forgiveness is never too late, but late forgiveness is seldom true.” – John Arrowsmith

John Arrowsmith, D.D. (1602-1659), puritan divine, was born near Newcastle-on-Tyne on 29 March 1602. In 1616 he entered St. John’s College, Cambridge, and graduated B.A. in 1619, and M.A. in 1623. In 1623 he became fellow of St. Catherine’s Hall. He married in 1631, and became incumbent in the same year of St. Nicholas Chapel, King’s Lynn. He was nominated on 25 April 1642 one of the two Norfolk divines to be consulted on church affairs. He sat as a member of the Westminster Assembly in 1643. In 1644 he was made D.D. and regius professor of divinity at Cambridge; and master of St. Catherine’s Hall, in the room of Dr. Beale, removed by the Earl of Manchester. On the sequestration of the Rev. Edward Sparke, D.D. (author of ‘Scintilla Altaris’), Arrowsmith obtained the rectory of St. Martin’s, Ironmonger Lane, in 1645, and became a member of the Sixth London Classis, as soon as the presbyterian form of government was set up. In 1647 he was vice-chancellor of Cambridge University, and in 1649 became master of Trinity. His writings are sternly puritanical, but candid and clear. He must have had rich and endearing qualities and some breadth to secure for him at Cambridge the deep attachment of Whichcote, who speaks of him as ‘my friend of choice, a companion of my special delight, whom in former years I have acquainted with all my heart,’ and further bears testimony to ‘the sweetness of his spirit and the amiableness of his conversation.’ He died in February 1659, being buried 24 Feb. He published sermons: 1. ‘Covenant-avenging Sword brandished,’ 1643. 2. ‘England’s Ebenezer,’ 1645. 3. ‘A great Wonder in Heaven,’ 1647 (all preached before parliament). Also (4) ‘Tactica Sacra; sive, de milite spirituali pugnante, vincente et triumphante Dissertatio. Accesserunt Orationes aliquot anti-Weigelianæ,’ 1657 ; and (5) ‘Armilla Catechetica: a Chain of Principles … wherein the chief heads of Christian Religion are asserted,’ 1659. Posthumously appeared his (6) Θεάνθρωπος ’ or God-man; being an exposition of John i. 1-18,’ 1660.

The Works of John Arrowsmith available in old English: 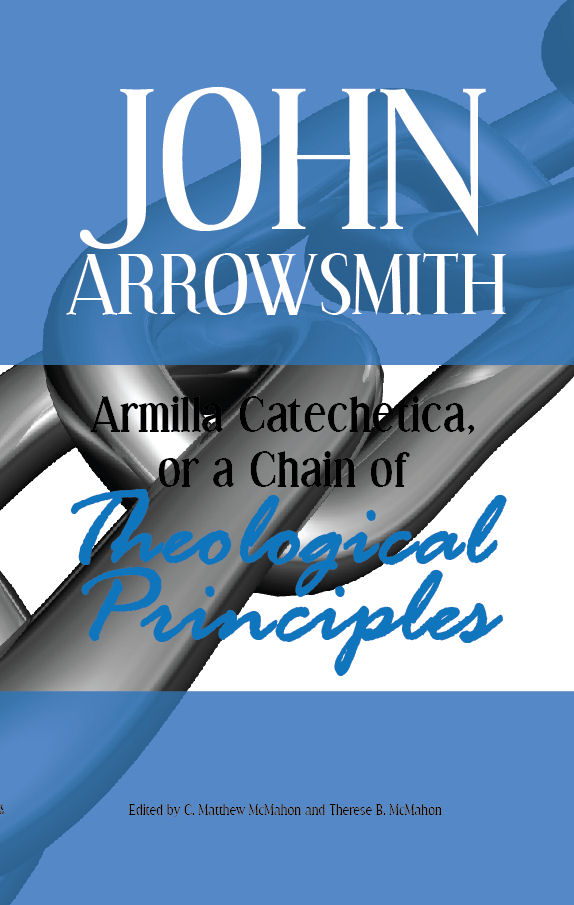