Popular English puritan, preacher and voluminous author who commented on the whole bible.

Biography and Works of Matthew Henry:

The Works of Matthew Henry available in old English:

A Church in the House, or, Family Religion. (88 pages) PDF Internet Archive

The Communicant’s Companion. (293 pages) PDF Internet Archive
Also goes by the title How to Prepare for Communion.

A Discourse on Meekness and Quietness of Spirit. (166 pages) PDF Internet Archive

An Exposition of the Old and New Testament, Volume 1. (754 pages) PDF Internet Archive
Contains Matthew Henry’s memoirs on the commentary, and notes on Genesis through Deuteronomy.

An Exposition of the Old and New Testament, Volume 2. (930 pages) PDF Internet Archive
Containing notes on Joshua through Esther.

An Exposition of the Old and New Testament, Volume 3. (896 pages) PDF Internet Archive
Containing notes on Job through the Song of Solomon. 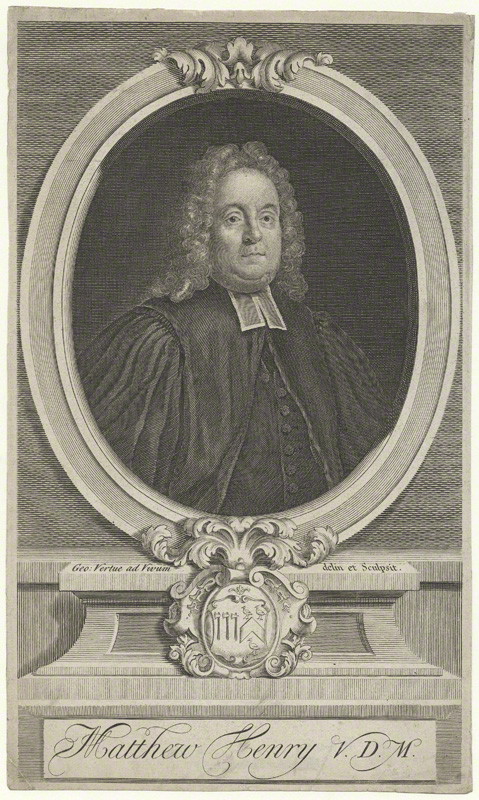 An Exposition of the Old and New Testament, Volume 4. (1194 pages) PDF Internet Archive
Containing notes on Isaiah through Malachi.

An Exposition of the Old and New Testament, Volume 6. (946 pages) PDF Internet Archive
Containing notes on Acts through Revelation.

The Miscellaneous Works of the Reverend Matthew Henry, Volume 1. (781 pages) PDF Internet Archive
Containing the following:
1. The Life of Philip Henry.
2. On the death of Mrs. Katharine Henry.
3. The Pleasantness of a Religious Life.
4. Concerning Meekness and Quietness.
5. Christianity not a Sect.
6. Communicant’s Companion.
7. Directions for Daily Communion with God.
8. Discourses Against Vice and Profaneness.
9. Folly of Despising our own Souls.
10. Folly of Despising our own Ways.
11. Sober-mindedness Recommended to the Young.
12. Right Management of Friendly Visits.
13. A Church in the House: Family Religion. 1 Corinthians 16:19.
14. Reformation of Manners.
15. Popery a Spiritual Tyranny.
16. Method for Prayer.
17. Essay on Psalmody, with Family Hymns.

The Pleasantness of a Religious Life. (177 pages) PDF Internet Archive

Matthew Henry (1662-1714) was born in 1662 in a Welsh farmhouse close to the border of England and Wales. A few weeks earlier, his father Philip Henry (1631-1696) had been ejected from his ministry in the Established Church.

Along with nearly two thousand other ministers, Philip Henry had refused to submit to the Act of Uniformity, which had come into effect on 24 August 1662 and was radically opposed to all that Puritans like Henry stood for.

Philip thus left his charge at Worthenbury, Shropshire, and took up residence a few miles away at Iscoed, Flintshire. Matthew Henry’s formative years were consequently spent in a Christian community that lay ‘under the cross’ of state harassment and persecution.

Childhood and conversion
Matthew was Philip Henry’s second son. Born prematurely to his mother Katherine Henry, he apparently suffered from a weak constitution during his childhood. But what he lacked in physical health he made up for in spiritual vigor.

There is credible evidence that he could read portions of the Scriptures when he was only three years old. And according to his own reckoning, his conversion took place before he turned eleven. It was one of his father’s sermons that, in Henry’s words, ‘melted’ him and caused him to ‘enquire after Christ’.

Schooled by his gifted father till he was eighteen, Henry went on to study at a Nonconformist academy in Islington, then a village near London. After 1662, Nonconformists like Henry were barred from graduating from either of the ancient universities of Oxford and Cambridge. As a result, various Nonconformist academies had come into existence to provide a liberal arts education and training for ministry.

The tutor at this academy was an eminent Presbyterian scholar, Thomas Doolittle (1631-1707), who had been converted as a boy in Kidderminster under the preaching of Richard Baxter (1615-1691). In 1682, however, persecution forced the academy to move, and Henry returned home.

Ministry in Chester
Three years later he journeyed again to London, this time to study at Grays Inn, one of four principal London centers for law studies. Whatever the immediate motives behind this move, Henry ‘ever kept in view’ the vocation of pastoral ministry, says John Bickerton Williams in his biography of the Puritan commentator. However, this ambition was not realized until 1687.

Upon his return from London in June 1686, Henry began preaching in the neighborhood of his parents’ farm. The following year, while on business in Chester, he spoke for a number of evenings in the house of a baker.

His preaching made a favorable impression on a good number of Chester Nonconformists, and he was subsequently asked to become the minister of a Presbyterian congregation in the town.

Henry went once again to London to be ordained on 9 March 1687 by six Presbyterian pastors. This group included Richard Steele (1629-1692), a native of Cheshire who had been involved in the ordination of Matthew Henry’s father thirty years’ earlier.

Henry began his ministry in early June 1687. Over the course of the next two decades his congregation increased to more than 350 members. Not surprisingly, his success as a pastor caused other churches to seek him as their minister.

Door of opportunity
He declined calls from two London churches in 1699 and 1702, a Manchester cause in 1705, and from two more London churches in 1708. The church in the capital that had sought to call him in 1699 was located in Hackney, and they renewed their efforts in 1710.

Discussion between Henry and the leadership of this church went back and forth for several months. Finally, in mid-July 1711, Henry set down on paper eleven reasons he believed were leading him to London.

Foremost among them was his conviction that ‘a much wider door of opportunity to do good’ was open in London than in Chester. He also noted that in London he would have much better access to printers and libraries, a matter of some concern since he was now engaged in writing his monumental commentary on the Word of God.

His ministry in London commenced on 18 May 1712. It is noteworthy that he preached to a much smaller congregation that Lord’s Day than the one he had left in Chester. According to J. B. Williams, there were fewer than a hundred members in the church when Henry came.

The two years of ministry in London were ones of zealous activity, but also ones in which Henry became increasingly ill, suffering from diabetes and repeated attacks of kidney stones. Worn out by his labors, he died from a stroke while on a preaching tour of Cheshire in June 1714.

Exposition of the Bible
Henry was the author of a goodly number of publications, some of which had a wide circulation in the years following his death — for example, A Communicant’s Companion (a treatise on the frame of heart in which to receive the Lord’s Supper written in 1704) and Directions for Daily Communion with God (1712). But the work for which Henry is best known is undoubtedly The Exposition of the Old and New Testaments.

Henry had begun this massive work in November 1704. By the time of his death ten years later, the project had got as far as the end of the book of Acts. It would be finished by a number of ministers after his death.

The commentary is quintessentially Puritan. It focused on biblical spirituality and was alert to the need to glorify God in the whole of life. It was also chock-full of the terse and piquant aphorisms that the Puritans delighted to use to penetrate the hearts of their hearers and readers. Here are a few examples:

‘God’s grace can save souls without preaching, but our preaching cannot save them without God’s grace, and that grace must be sought by prayer’ (on Ezekiel 37:1-14).

‘Ministers may be serving Christ, and promoting the great ends of their ministry, by writing good letters, as well as by preaching good sermons’ (on Acts 18:7-11).

‘The pleasures of sense are puddle-water; spiritual delights are rock water, so pure, so clear, so refreshing — rivers of pleasure’ (on Exodus 17:1-7).

‘The beauty of holiness is that which the grave, that consumes all other beauty, cannot touch, or do any damage to’ (on Psalm 49:6-14).

The Exposition’s influence
The ministry of George Whitefield (1714-1770), who was born the year Henry died, was deeply impacted by his commentary. He read it throughout his ministry. A recent study by an American scholar, David Crump, has shown that Henry’s ‘in depth, practical, Calvinistic and biblical exposition’ formed the backdrop for many of Whitefield’s sermons.

Whitefield’s friend, the hymn-writer Charles Wesley (1707-1788), was so moved by Henry’s comments on Leviticus 8:35 that he based one of his most famous hymns on them. Henry had written: ‘we have every one of us a charge to keep, an eternal God to glorify, an immortal soul to provide for, needful duty to be done, our generation to serve; and it must be our daily duty to keep this charge, for it is the charge of the Lord our Master, who will shortly call us to an account about it’.

Gripped by this comment, Wesley sat down to write A charge to keep I have in which he used many of Henry’s actual phrases.

Some words by the Calvinistic Baptist preacher and educator John Ryland Sr (1723-1792) sum up the impact that Henry’s Exposition made in the decades following its publication.

‘It is impossible for a person of piety and taste’, declared Ryland, ‘to read the Exposition of Mr. Henry without wishing to be shut out from all the world to read it through without one moment’s interruption’.

Henry himself well knew this delight in good Christian books. He stated in his diary on one occasion: ‘I am always best when alone. No place is like my own study: no company like good books; especially the book of God’.

Little wonder, then, that he helped to shape the spirituality and Christian convictions of so many eighteenth and nineteenth century readers.