The Works of Sydrach Simpson available in old English:

1. Diatribē. Wherein the judgement of the reformed churches and Protestant divines, is shewed, concerning ordination. Laying on of hands in ordination of ministers: and, preaching by those who are not ordained ministers. London: printed for Peter Cole, and are to be sold at his shop at the sign of the Printing-Press in Cornhil, neer the Royal Exchange, 1647.
2. A sermon preached at Westminster before sundry of the House of Commons. By S. Simpson sometimes preacher on New Fish-street hill. London: printed for Peter Cole, and are to be sould at his shop near the Royall Exchang, anno 1643.
3. Two books of Mr Sydrach Simpson, late master of Pembroke-Hall in Cambridg; and preacher of the Gospel in London. Viz. I. Of unbelief; or the want of readiness to lay hold on the comfort given by Christ. II. Not going to Christ for life and salvation is an exceeding great sin, yet it is pardonable. London : printed by Peter Cole, printer and book-seller, at the sign of the Printing-press, in Corn-hill, neer the Royall Exchange, 1658.
4. The anatomist anatomis’d. Or, A short answer to some things in the book, intituled, An anatomy of independencie: wherein it’s shewed; I. That many things reported are mis-reported. II. That if all were true, yet divulging of them in this manner, is not according to the word of God. III. Nor argumentative against the cause that’s falsly called independency. By Sidr. Simpson. London : printed for Peter Cole, at the Royall Exchange, 1644.
5. Reformation’s preservation: opened in a sermon preached at Westminster before the honourable House of Commons, at the late solemne fast, July 26. 1643. By Sidr. Simpson, minister of the Word. Published by order of that House London : printed for Benjamin Allen, and are to be sold in Popes-head-Alley, 1643.
6. A Plain and Necessary Confutation of Antichristian Errors, 1654, 4to. 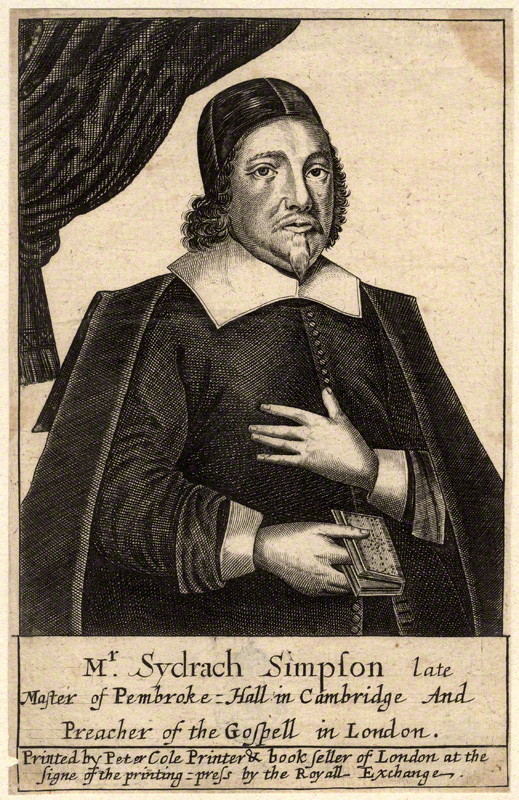 Sidrach or Sydrach Simpson (1600?–1655), independent divine, was born about 1600, and educated at Emmanuel College, Cambridge, where he was admitted sizar in 1616 or beginning of 1617; Brook makes him B.D., apparently in error. Christopher Atkinson, the quaker, spells his name Sydrach Sympson (1654), so does Baxter, occasionally. Neal, followed by others, adopts this spelling, but it appears in none of Simpson’s own writings. He held a curacy and lectureship at St. Margaret’s, Fish Street, London, where his preaching became popular, but for breach of the canons he was convened by Laud at his metropolitical visitation in 1635. He made his submission, but, finding his position as a puritan intolerable, he migrated to Holland, probably in 1638, being the last of the five, afterwards known as “apologists,” to take this step. In Rotterdam he joined the independent church, under John Ward as pastor, and William Bridge  as teacher. In consequence of a difference with Bridge he took his leave in 1639, without letters dimissory, and with four outsiders “erected” a new church, “near the Exchange,” of which he was pastor. Ward, who sympathized with Simpson, was deposed, and left Rotterdam before 10 Jan. 1640. Simpson’s church increased (it contained a troublesome element of seekers and Anabaptists) while Bridge’s declined. With Simpson was associated Joseph Symonds, who had been curate to Thomas Gataker.  The bitterness of the rivalry between Bridge and Simpson led both to leave Holland, whereupon the civil authorities insisted on the amalgamation of the two congregations, which was effected under Robert Parke (1600–1668).
Apparently Simpson left Holland for London in 1641, earlier than Bridge. He resumed his lecture at St. Margaret’s, Fish Street, and lectured also at Blackfriars. He was made a member of the Westminster assembly of divines by the ordinance of 12 June 1643, being then “of London.” He attended regularly and was one of the five divines responsible for the “Apologeticall Narration” (1643) of the “dissenting brethren.” Simpson was an extreme advocate for liberty of conscience, even in regard to opinions “contrary to the light of nature.” His objection to the Presbyterian system of appeals from court to court was grounded on rejection of the finality of such reference, “the law of nature teacheth to go to any that can relieve,” and he contemplated the possibility of “an appeal from king and parliament to a national assembly.” On 13 Jan. 1647 the assembly appointed a committee to consider an order of the committee for plundered ministers designating Simpson as afternoon preacher in the chapel at Somerset House. The appointment was under debate till March 2nd, when the matter was deferred, owing to Simpson’s illness; no finding is recorded. In 1650 the parliamentary visitors of Cambridge University appointed Simpson master of Pembroke Hall, in the room of Richard Vines (1600–1655), who had refused the engagement. About the same time he obtained the sequestered rectory of St. Mary Abchurch, London, succeeding John Rawlinson, who had obtained the rectory of Lambeth. Here he set up a congregational church, from which, in May 1651, Captain Robert Norwood was excommunicated for “blasphemous errors” of a pantheistic stamp. In 1653 he was appointed rector of St. Bartholomew, Exchange, by the commissioners of the great seal. He preached at the Cambridge commencement, 1653; was one of the parliamentary committee of fourteen, appointed in the same year, to draw up “fundamentals;” and on 20 March 1654 was made one of the “triers.” For preaching against Cromwell he was imprisoned for a short time in Windsor Castle, and prohibited from preaching within ten miles of London. Ill health seems latterly to have affected Simpson’s spirits. Neal places his death in 1658, but he died on April 18, 1655, and was buried in St. Bartholomew’s, Exchange. His portrait has been engraved. His will (made April 2, proved 15 April 1655, and signed “Sidrach Simpson”) disposes of considerable property, and mentions his wife Isabella. His son, Sidrach Simpson, D.D. (d. 1704), was educated at Oxford after his father’s death, and was for forty years rector of Stoke Newington (from 3 Jan. 1664–5), a high churchman, and somewhat severe with dissenters; though, says Luke Milbourne (1649–1720) , “he did not go farther than the Assembly did with the Five Brethren.”