One of the most articulate Westminster puritans who published numerous works.

The Works of Robert Sanderson available in old English: 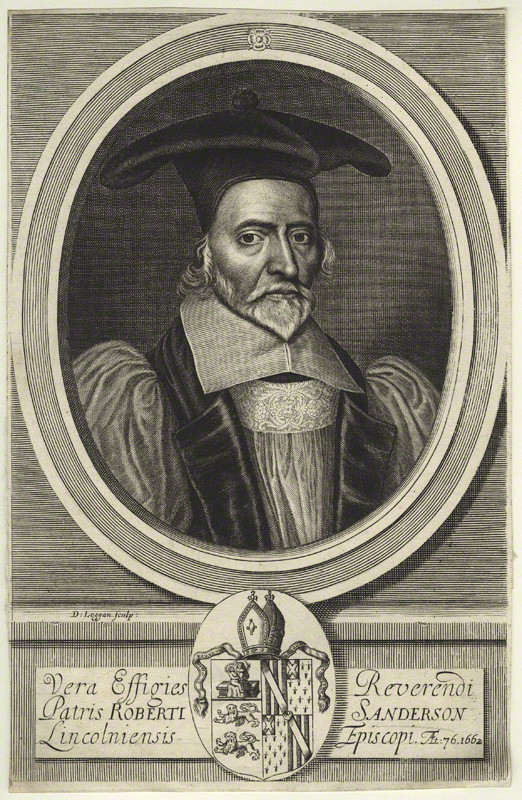 Robert Sanderson (1587–1663), bishop of Lincoln, was the second son of Robert Sanderson of Gilthwaite Hall, and Elizabeth, daughter of Richard Carr of Butterthwaite Hall, both in Yorkshire. He is commonly said to have been born in Rotherham. But a Robert, son of Robert Sanderson, was baptised at Sheffield on 20 Sept. 1587, and a local tradition fixed upon a house in Sheffield, called the Lane Head Stane, as that in which the future bishop was born (Le Neve, Fasti, ii. 26). Sanderson was educated in the grammar school of Rotherham, and matriculated on 1 July 1603 from Lincoln College, Oxford. He graduated B.A. on 3 May 1606, being made fellow of his college the same year, and proceeding M.A. on 11 July 1608, B.D. in 1616, D.D. in 1636. On 7 Nov. 1608 he was appointed reader in logic in his college. In 1611 he was ordained deacon and priest by Dr. John King, bishop of London. In 1618 he was presented by his cousin, Sir Nicholas Sanderson, viscount Castleton, to the rectory of Wyberton, near Boston, Lincolnshire. This he soon afterwards resigned, and was presented in 1619 to the rectory of Boothby Paynel (Pagnell) in the same county. In May 1619 he resigned his fellowship, and ‘soon afterwards,’ it is said, was made a prebendary of the collegiate church of Southwell. He held the prebend of Beckingham there in 1642 (ib. iii. 417). On 3 Sept. 1629 he was made prebendary of Farrendon-cum-Balderton in the cathedral church of Lincoln (ib. ii. 150, not in the index). On the recommendation of Laud, then bishop of London, Charles I made him one of his chaplains in 1631. In 1633 he was presented by George, earl of Rutland, to the rectory of Muston, Leicestershire. This was near Belvoir, where Charles I stayed in 1634 and 1636, and Sanderson became personally known to the king. ‘I carry my ears to hear other preachers,’ Charles used to say, ‘but I carry my conscience to hear Dr. Sanderson.’ On 19 July 1642 he was appointed regius professor of divinity at Oxford, but the troubles of the time prevented him from performing any duties of the office till 1646.

In 1643 he was nominated by parliament one of the assembly of divines, but never sat; and as he refused to take the Solemn League and Covenant on the outbreak of the civil war, his living of Boothby Pagnell was sequestered. He was also ousted on 14 June 1648 by the parliamentary visitors from the divinity professorship at Oxford (ib. iii. 509). In his parish church at Boothby Pagnell he was compelled to modify the forms of the common prayer to appease the parliamentarians in the neighbourhood. The entire service-book, thus modified in his own manuscript, is in the possession of the dean and chapter of Windsor. Sanderson was even seized and carried prisoner to Lincoln, to be held as a hostage in exchange for a puritan minister named Robert Clark, who was in durance at Newark (Walker, Sufferings of the Clergy, 1714, pp. 104–5). In 1658 he was reduced to great straits for subsistence, but was assisted by Robert Boyle.
At the Restoration Sanderson presented an address of congratulation from the clergy of Lincoln to the king, 23 July 1660. In August of the same year he was reinstated in the regius professorship at Oxford (Le Neve, Fasti, iii. 510), and on 28 Oct. 1660 was consecrated bishop of Lincoln (Stubbs, Registrum, p. 98). In his short episcopate of three years Sanderson showed characteristic openhandedness, restoring Buckden, the episcopal residence, at his own expense. In 1661, at the conference with the presbyterian divines held at the Savoy, Sanderson was chosen moderator. Baxter accuses him of showing ‘great peevishness’ in that office. The ‘Prayer for all Conditions of Men’ and the ‘General Thanksgiving,’ added to the prayer-book as a result of this conference, have been often ascribed to Sanderson (Procter, History of the Book of Common Prayer, ed. 1872, pp. 266–7), probably on insufficient grounds. He was, however, the author of the second preface, ‘It hath been the wisdom,’ &c. Sanderson died on 29 Jan. 1663, and was buried in the chancel of the parish church of Buckden. An abstract of his will, proved 28 March 1663, is in the Harleian MSS. (7048, pp. 356–7). Sanderson married, about 1620, Ann, daughter of Henry Nelson, B.D., rector of Haugham, Lincolnshire, who survived him. He mentions in his will that he had lived ‘almost 43 years in perfect amity’ with his wife. An anonymous portrait of Sanderson is at the episcopal palace, Lincoln, and Bromley mentions engravings by W. Dolle, Hollar, Loggan, and R. White.

Besides his works in logic and theology, Sanderson was a diligent student of antiquities, and left large collections in manuscript relating to the ‘History of England, or to Heraldry or to Genealogies,’ to his son Henry (ib.). The transcript he made of the monumental inscriptions in Lincoln Cathedral, as they stood there in 1641, after being revised by Sir William Dugdale, was printed at Lincoln in 1851. An autograph note-book, containing texts suitable for various occasions, is in the British Museum (Add. MS. 20066).