The Prince of Puritan Preachers.

“Grace is glory begun, and glory is grace perfected.”

1. The Sinner’s hope; a discourse on Ezra. 10.
2. Usurpation defeated and David restored; a Sermon on the restoration of Charles II.
3. The Covenant of Grace effectually remembered, of the God of All Grace.
4. A Discourse on Psalm 105 with 1 Chron. 16:15.
5. A Help to Duty in and Right Improvement of Sickness.
6. A Discourse on Job. 5:6-8.
7. A Treatise on Rash and Sinful Anger, from Proverbs 25:28.
8. A faithful Narrative of the Life and Death of that holy and laborious preacher Mr. John Machip, late of Astbury, in Cheshire.

Long before the Baptist Charles Spurgeon, Henry Newcome (1627-1695) was known as the Prince of Preachers. He was a native of Northhamptonshire, and educated at St. John’s College in Cambridge where he earned a Master of Arts. After his conversion and resolve to follow Jesus Christ, his first position seems to have been in Goostree, and afterwards at Gosworth, in Cheshire. When Mr. Richard Hollingworth died, he received a unanimous invitation to assist Mr. Richard Heyrick at Manchester, a man of great esteem and worth. In replying to this call Mr. Newcome was conflicted, having also received a call from Shrewsbury, and desired to ascertain the divine will in such a quandary. After much consideration and prayer he accepted the position in Manchester in 1656, and continued there to his death.

In Manchester, throughout the course of his ministry, he found much use for his talents which were faithfully employed in his Christ’s service. Not only did he labour within his own ministry, but he also took time to minister in the surrounding areas, and they too enjoyed the benefit of sitting under his preaching and teaching. 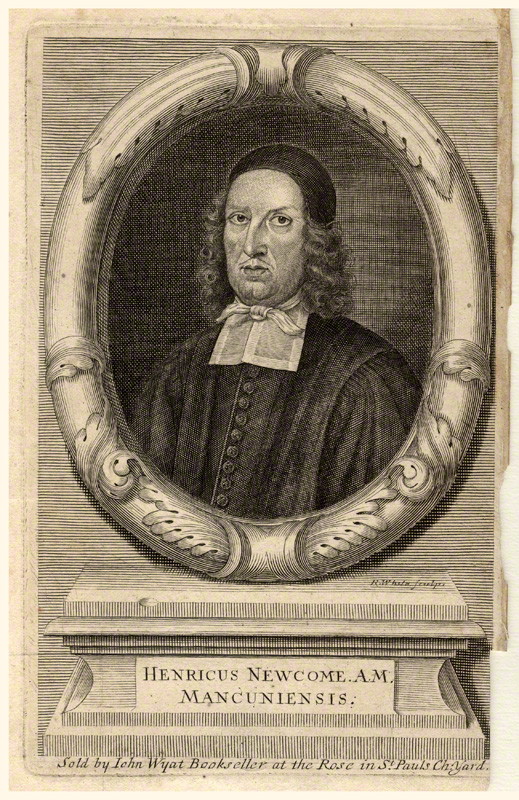 When King Charles took his throne, no longer in need of his Puritan friends, he was intolerant of them and produced the Act of Uniformity. The Puritans, including our Mr. Newcome, could not in good conscience and according to Scripture, comply with this act. Being forbid to preach, he relinquished his position and, instead, preached from his house. Along with others, Mr. Newcome was imprisoned and fined many times, as was the nature of the Puritans to do in obeying God rather than men.

During some of his imprisonments, he wrote extensively which circulated throughout the country and were used for the up building of the saints. When the Oxford Act took place, and he was driven from the heart of his family and flock, he sojourned at Ellenbrook waiting an opportunity to return to his previous ministry.

After some indulgences were issued by King Charles, Mr. Newcome returned and preached to his congregation in a place deemed appropriate and lawful to do so. A chapel was built for him in what is now called Cross Street, but then an open field called Ackers. Here Mr. Newcome continued to administer the ordinances of the gospel with great acceptance and usefulness until September 20, 1695, on which day it pleased God to take him to his heavenly reward, at 68 years of age.

The loss to the church by Mr. Newcome was severely felt by the churches in his ministerial area, and Matthew Henry mentions it in his diary with more than common concern. His unusual gifts made him useful to Christ and gave him an eminent status, not only as a minister of the gospel, but as an instructor of youth, in both offices he was effective.

Mr. John Howe said of Mr. Newcome, “It may be truly said of such a man, as unknown, and yet well known. They that knew him best, could know but a small part of his true and great worth; and might always apprehend when they knew most of him, there was still much more that they did not know. His most sincere and inartificial humility, still drawing a veil over his other excellencies, which it hid and adorned at once; so as the appetite of knowing more must always meet with a check, and an incitation at the same time. There was in him a large stock of solid learning and knowledge, always ready for use; for ostentation never. Conscience, the most strict and steady to himself, and the remotest from censoriousness of other men. Eloquence, without, any labor of his own, not imitable by the greatest labor of another. O! the strange way he had of insinuating and winding himself into his hearer’s bosoms! I have sometimes heard him, when the only thing to be regretted was, that the sermon must so soon be at an end. Conversation, so facetious and instructive together, that they who enjoyed it, if they were capable of improving, it, could scarcely tell whether they went away from him more edified or delighted. He was a burning and a shining light. O Manchester! Manchester! that ancient famed seat of religion and profession, may Capernaum’s doom never be thine! May thy Heyrick, Hollingworth, Newcome, and thy neighbours Angier, and Harrison, and diverse more, never be witnesses against thee.”

Mr. John Chorlton, who was his fellow labourer, and preached his funeral sermon, says of him, “He was a person of good natural parts, one that had enough of a genius to master what be applied himself to, and to make up the figure of a great man. These natural abilities were cultivated by extraordinary industry, which began very early and continued all his life; witness the many volumes be has left behind him written with his own hand. He was most conversant in those parts of learning which are directly subservient to divinity, and made great use thereof in all his composures; but with so little affectation, that the unlearned were never amused by it, and yet the judicious part of his auditory had no lack of it. His parts and learning were both admirably set off by a singular fitness for friendship and conversation, in which he was amiable above many. His temper was serene, candid, generous to, and beyond his power. His discourse was ingenuous, innocent, pleasant, and profitable to a high degree. His deportment was grave, yet sweet and obliging. These virtues were lodged in a soul truly Christian. I know we must make some allowance for human infirmities, from which none are exempt whilst they are in the body. He was but a candidate for the sate of perfection, and was a man subject to like passions as we are, which he hath now put off together with mortality. But certainly, notwithstanding this, he had a truly Christian spirit, and did abound in choice experiences of God’s dealing with himself and others. His life was filled up with a uniform series of faithful services to God and to his generation. He did not load men with heavy burdens, which, he would not touch with one of his fingers, but put his own neck into the same Christian yoke, which he exhorted others to take upon them. The greatest part of his character (his Christianity supposed,) is this, that he was an able and faithful minister of the Gospel, not of the letter, but of the Spirit. He was not only an excellent minister at large, but a prudent vigilant pastor to a numerous flock that dearly loved him, and was no less dearly beloved of him. How solicitous was he for the peace and holiness of his people! His preaching matter was solid and weighty, and of a practical tendency to change men’s natures, and reform their lives. He was not for novel undigested speculations. He was a messenger, “and interpreter, one among a thousand, to show unto man his uprightness,” (Job 33:23). His sermons were plain and discoursive and full of holy zeal and fervor…I do not present you. with this account of this eminent and faithful servant of Christ, as if it were a full and perfect, character of him. No, that would require a larger compass, and an abler man than I can give it. This may suffice to be spoken at the present, to the honour of Divine grace, manifesting itself in so useful an instrument. May it also provoke us to bless God for him, and kindle in us an emulation of his attainments, and of the success that attended his labours.” (stated in his funeral sermon by Mr. Chorlton for Mr. Newcome).