Westminster Divine and a puritan "brain", preacher and theologian, with some of the best writings on the Lord's Supper in print.

“Religion is not a thing which it is possible to put off and put on like a Sunday dress… If you think you are doing so, believe me that as yet it is not a religion, but a web of delusions.”

The Works of Edward Reynolds available in old English:

1. The Whole Works of Edward Reynolds, Volume 1. (569 pages) PDF Google Books
Contains the author’s memoir and three larger treatises: “The Vanity of the Creature”; “The Sinfulness of Sin”; and “The Life of Christ.”

3. The Whole Works of Edward Reynolds, Volume 3. (935 pages) PDF Google Books
Contains seven sermons on Hosea 14, and “Meditations on the Holy Sacrament of the Lord’s Supper.”

6. The Whole Works of Edward Reynolds, Volume 6. (403 pages) PDF Google Books
Contains “Treatise on the Passions and Faculties of the Soul.” 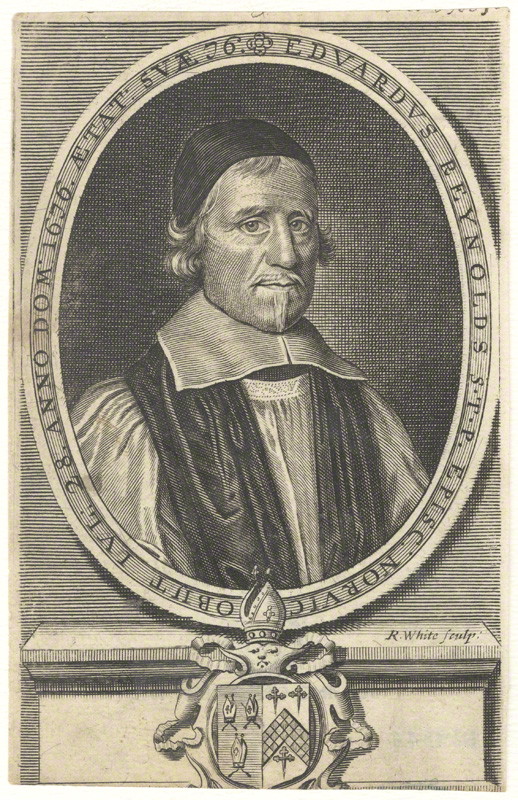 Edward Reynolds (1599–1676), bishop of Norwich, born in November 1599, was son of Augustine Reynolds, one of the customers of Southampton, by his wife Bridget. The father belonged to a family formerly settled at Landport in Somerset. He was educated at Southampton grammar school, to which he afterwards gave a donation of 50l., and matriculated from Merton College, Oxford, 26 Jan. 1615–16. At Merton he was a postmaster, was under Sir Henry Savile, and is said to have become a good scholar; he graduated B.A. 15 Oct. 1618, became fellow 1619, proceeded M.A. 10 July 1624, and D.D. 12 April 1648, incorporating at Cambridge for the last two degrees. In 1622 he became one of the preachers at Lincoln’s Inn, and for a time resided chiefly in London, though he kept up his connection with Oxford, preaching at Merton, in 1627, a sermon in which he took John Prideaux’s part against Peter Heylyn [q. v.] He was one of the king’s chaplains, became vicar of All Saints, Northampton, 1628, and rector of Braunston, Northamptonshire, by the interest of Isaac Johnson in 1631, whereupon he resigned his appointment at Lincoln’s Inn. When the civil war broke out, Reynolds came into prominence as a moderate Anglican who was ready to accept an accommodation. He was one of the Westminster assembly of divines in 1643, though he put off taking the covenant till March 1644. He did not speak much, but was one of the committee of twenty-two appointed to examine and approve of ministers presented by parishes. On 31 Dec. 1645 the House of Commons voted Reynolds 100l. From 1645 to 1662 he was vicar of St. Lawrence, Jewry. In 1647 he was one of the visitors at Oxford, but he was not on the visitation of 1654. He held the deanery of Christchurch from 1648 to 1650, and again in 1659; in 1648 he was chosen vice-chancellor. He was ejected from Christchurch in 1659 because he would not take the engagement, and occupied himself with supervising a reissue of the confession of faith.

At the Restoration Reynolds conformed. He thought, in all probability, that more would follow him than actually did so. In June 1660 he drew up a paper for reconciling differences, and in July he was made warden of Merton College; the same year he received a canonry at Worcester. In 1661 he took part in the Savoy conference, and after much anxious consideration, and after conversations with Calamy, Chalmers, and Baxter, he accepted the bishopric of Norwich. In his diocese he was remembered in that, contrary to the custom of those who change sides, he was very moderate in his treatment of dissenters. He died at the Palace, Norwich, 28 July 1676, and was buried in the chapel, where there is a monument to his memory. He married Mary, probably daughter of John Harding, president of Magdalen College, Oxford; she died 29 Sept. 1683 at Kingsthorpe, Northamptonshire, where she had gone to live with her son. They had a son Edward, noticed below, and their youngest daughter, Elizabeth, married, in 1651, John Conant [q. v.] Reynolds published many sermons and short religious works. They were very popular, and collections of them were published in 1658 and 1679, fol. (complete edition, with a memoir by Alexander Chalmers, London, 1826). Wesley included some of Reynolds’s sermons in vol. xxv. of his ‘Christian Library.’ An engraved portrait by D. Loggan is prefixed to the 1658 edition of Reynolds’s works, and another, by R. White, to his ‘Meditations on St. Peter.’

Edward Reynolds, (1629–1698), the only son, was educated at St. Paul’s school, and proceeded to Merton College, Oxford, but soon removed to Magdalen, where he graduated B.A. 14 March 1649, and D.D., as a grand compounder, in 1676. He was made a fellow of Magdalen by the parliamentary visitors, and in 1658 became rector of St. Peter’s, Northampton. On 20 Sept. 1660 he was appointed prebendary of Worcester, and, in the April following, archdeacon of Norfolk. He died 28 June 1698, and was buried at Kingsthorpe chapel, near Northampton, where there is an epitaph to his memory. He edited in 1677 his father’s ‘Meditations on the Fall and Rising of St. Peter.’