“Singing God’s praise is a work of the most meditation of any we perform in public. It keeps the heart longest upon the thing spoken. Prayer and hearing pass quick from one sentence to another; this sticks long upon it.”

The Works of John Lightfoot available in old English: 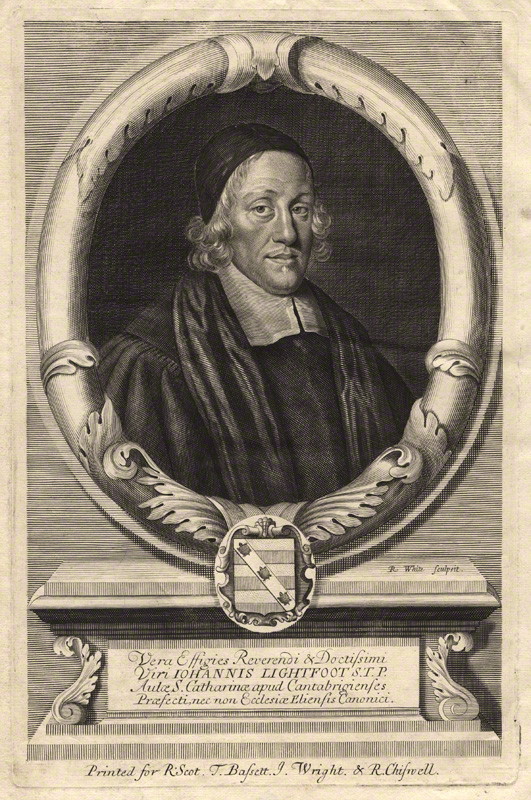 A commentary upon the Acts of the Apostles: chronicall and criticall (1645)
A few, and new observations, upon the booke of Genesis (1642)
A letter to a member of Parliament on the account of some present transactions (1689)
A sermon preached before the Honorable House of Commons…26. day of August 1645 (1645)
A sermon preached before the Honourable House of Commons…Febr. 24. 1646/47 (1647)
An handfull of gleanings out of the Book of Exodus (1643)
Elias redivivus: a sermon preached before the honorable House of Commons (1643)
Erubhin or Miscellanies Christian and Iudaicall, and others (1629)
Impensæ I. In chorographiam aliquam terræ Israeliticæ. II. In Evangelium S. Matthæi. III. In Evangelium S. Iohannis (1658)
Impensae in epistolam primam S. Pauli ad Corinthios (1664)
Impensae in Evangelium S. Johannis. (1671)
Impensæ in Evangelium S. Lucæ (1674)
Impensæ in Evangelium Sancti Marci (1663)
In Acta S. Apostolorum (1678)
In Evangelium Sancti Matthæi Horæ Hebraicæ et Talmudicæ (1658)
Some genuine remains of the late pious and learned John Lightfoot, D.D. Consisting of three tracts (1700)
The harmony of the foure evangelists (1644)
The harmony, chronicle and order of the New-Testament (1655)
The harmony, chronicle and order of the Old Testament (1647)
The temple service as it stood in the dayes of our Saviour (1649)
The works of the reverend and learned John Lightfoot D. D. (1684)

John Lightfoot: English Biblical critic and Hebraist; born at Stoke-upon-Trent, Staffordshire, Mar. 29, 1602; died at Ely, Cambridgeshire, Dec. 6, 1675. After completing his education at Christ’s College, Cambridge, he taught at Repton, Derbyshire, for two years and then took orders. Appointed curate of Norton-in-Hales, Shropshire, he became chaplain to the Hebraist Sir Rowland Cotton, who urged him to study Hebrew and other Semitic languages. He accompanied Cotton when he removed to London, and then became rector of Stone, Staffordshire, for about two years, but in 1628 changed his residence to Hornsey, Middlesex, in order to be able to consult the rabbinical collections at Sion College, London. During his residence at Hornsey he wrote his first work, dedicated to Cotton and entitled Erubhin, or Miscellanies, Christian and Judaical, penned for Recreation at vacant Hours (London, 1629). In the following year he was presented to the rectory of Ashley, Staffordshire, which he held twelve years, after which he settled in London and became rector of St. Bartholomew’s. Presbyterian in his sympathies, he took the parliamentary side in the Civil War and was a member of the Westminster Assembly. After a year at St. Bartholomew’s, he was appointed rector of Great Munden, Hertfordshire, and held it for the remainder of his life. In 1650 he was chosen master of St. Catharine Hall, Cambridge, and four years later became vice-chancellor. He again sided with the Presbyterians in the Savoy Conference of 1661, but accepted the Act of Uniformity in the following year. In 1667 he was appointed a prebendary at Ely. His Oriental library was bequeathed to Harvard College, but was burned in 1769.

Lightfoot was a prolific writer and is noteworthy as the first Christian scholar to call attention to the importance of the Talmud. His chief works, in addition to the one already mentioned, are as follows: A Few and New Observations on the Book of Genesis (London, 1642); A Handful of Gleanings out of the Book of Exodus (1643); Harmony of the Four Evangelists among themselves and with the Old Testament (3 vols., 1644-50); Harmony, Chronicle, and Order of the Old Testament (1647); The Temple Service as it stood in the Days of our Saviour (1649); The Temple, especially as it stood in the Days of our Saviour (1650); Harmony, Chronicle, and Order of the New Testament (1655); and the work which has done most to preserve his fame, Horæ Hebraicæ et Talmudicæ [From the Talmud and Hebraica] (6 vols., Cambridge and London, 1658-1678). The first edition of his collected works, those originally in Latin translated into English, was edited by G. Bright and J. Strype, 2 vols. London, 1684; and a Latin edition, including those at first written in English, was prepared by J. Texellius, 2 vols., Rotterdam, 1686. A complete edition of his writings was made by J. R. Pitman, 13 vols., London, 1822-25. It should also be noted that Lightfoot revised the Samaritan version of the Pentateuch for Walton’s Polyglot Bible.