A popular Calvinistic puritan and minister, simple to understand, and a great preacher.
Today, many Christians are turning back to the puritans to, “walk in the old paths,” of God’s word, and to continue to proclaim old truth that glorifies Jesus Christ. There is no new theology. In our electronic age, more and more people are looking to add electronic books (ePubs, mobi and PDF formats) to their library – books from the Reformers and Puritans – in order to become a “digital puritan” themselves. Take a moment to visit Puritan Publications (click the banner below) to find the biggest selection of rare puritan works updated in modern English in both print form and in multiple electronic forms. There are new books published every month. All proceeds go to support A Puritan’s Mind.

“God’s mercy is not manifested by the number of the persons that shall be saved as the way and method which he saves them.” A Call to Delaying Sinners, by Thomas Doolittle – eBook
But his print book HERE. 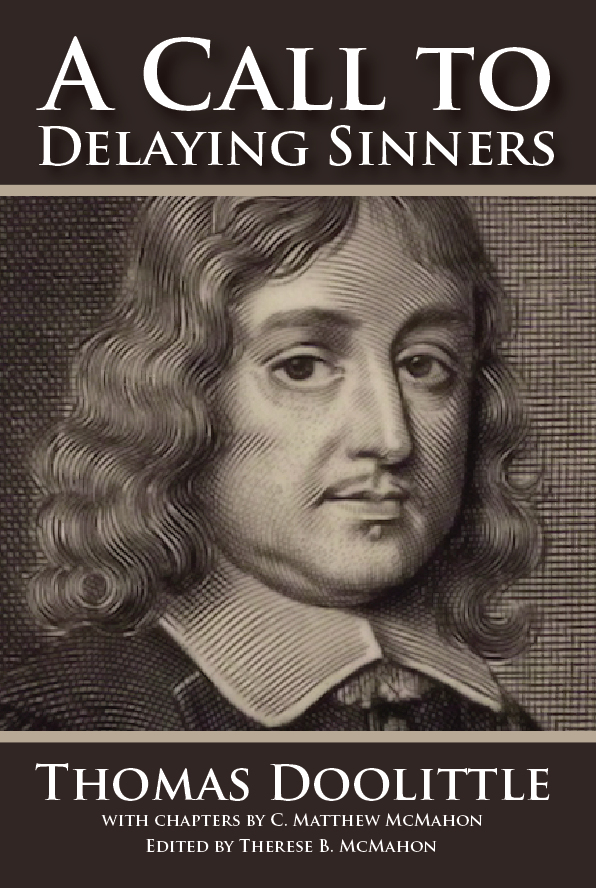 1. Sermon on Assurance in the Morning Exercise at Cripplegate
2. A Call to Delaying Sinners
3. The Saint’s Convoy to, and Mansions in Heaven
4. A Complete Body of Practical Divinity
5. Captives Bound in Chains Made Free by Christ Their Surety
6. The Swearer Silenced.
7. Treatise on the Lords Supper.
8. Love to Christ Necessary to Escape the Curse at His Coming.
9. How May the Duty of Daily Family Prayer be best managed.
10. Rebukes for Sin By the Flames of Hell.
11. A plain method of catechizing with a prefatory catechism.
12. Popery is a Novelty.
And 8 other sermons and tracts. 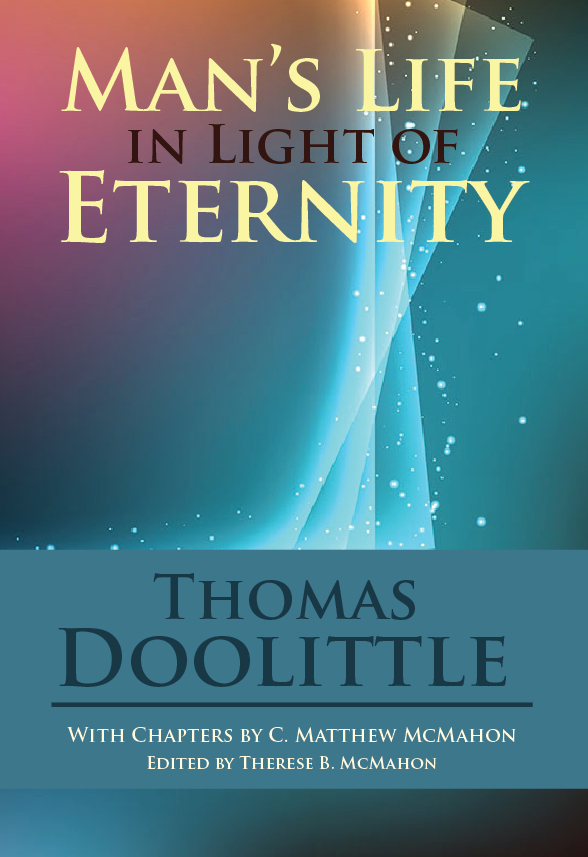 Thomas Doolittle (1632–1707), nonconformist tutor, third son of Anthony Doolittle, a glover, was born at Kidderminster in 1632 or the latter half of 1631. While at the grammar school of his native town he heard Richard Baxter preach as lecturer (appointed April 5, 1641) the sermons afterwards published as “The Saint’s Everlasting Rest” (1653). These discourses produced his conversion. Placed with a country attorney he scrupled at copying writings on Sunday, and went home determined not to follow the law. Baxter encouraged him to enter the ministry. He was admitted as a sizar at Pembroke Hall, Cambridge, on June 7, 1649, being then “17 annos natus.” He could not, therefore, have been born in 1630, as stated in his “memoirs.” The source of the error is that another Thomas, son of William and Jane Doolittle, was baptised at Kidderminster on Oct. 20, 1630. His tutor was William Moses, afterwards ejected from the mastership of Pembroke. Doolittle graduated with an M.A. at Cambridge. Leaving the university for London he became popular as a preacher, and in preference to other candidates was chosen (1653) as their pastor by the parishioners of St. Alphage, London Wall. The living is described as sequestered in Rastrick’s list as quoted by Palmer, but James Halsey, D.D., the deprived rector, had been dead twelve or thirteen years. Doolittle received Presbyterian ordination. During the nine years of his incumbency he fully sustained his popularity. On the passing of the Uniformity Act (1662) he “upon the whole thought it his duty to be a nonconformist.” He was poor; the day after his farewell sermon a parishioner made him a welcome present of 20l. A residence had been built for Doolittle, but it appears to have been private property; it neither went to his successor, Matthew Fowler, D.D., nor did Doolittle continue to enjoy it. He removed to Moorfields and opened a boarding-school, which succeeded so well that he took a larger house in Bunhill Fields, where he was assisted by Thomas Vincent, ejected from St. Mary Magdalene, Milk Street.

In the plague year (1665) Doolittle and his pupils removed to Woodford Bridge, near Chigwell, close to Epping Forest, Vincent remaining behind. Returning to London in 1666, Doolittle was one of the nonconformist ministers who, in defiance of the law, erected preaching-places when churches were lying in ruins after the great fire. His first meeting-house (probably a wooden structure) was in Bunhill Fields, and here he was undisturbed. But when he transferred his congregation to a large and substantial building (the first of the kind in London, if not in England) which he had erected in Mugwell (now Monkwell) Street, the authorities set the law in motion against him. The lord mayor amicably endeavored to persuade him to desist from preaching; he declined. On the following Saturday about midnight his door was broken open by a force sent to arrest him. He escaped over a wall, and intended to preach next day. From this he was dissuaded by his friends, one of whom (Thomas Sare, ejected from Rudford, Gloucestershire) took his place in the pulpit. The sermon was interrupted by the appearance of a body of troops. As the preacher stood his ground “the officer bad his men fire.” “Shoot, if you please,” was the reply. There was considerable uproar, but no arrests were made. The meeting-house, however, was taken possession of in the name of the king, and for some time was utilized as a lord mayor’s chapel. On the indulgence of March 15, 1672 Doolittle took out a license for his meeting-house. The original document, dated April 2, hangs in Dr. Williams’s library. The meeting-house is described as “a certaine roome adjoining to ye dwelling-house of Thomas Doelitle in Mugwell Street.” Doolittle owned the premises, but he now resided in Islington, where his school had developed into an academy for “university learning.” When Charles II (March 8, 1673) broke the seal of his declaration of indulgence, thus invalidating the licenses granted under it, Doolittle conducted his academy with great caution at Wimbledon. His biographers represent this removal as a consequence of the passing (it may have been an instance of the enforcing) of the Five Miles Act (1665). At Wimbledon he had a narrow escape from arrest. He returned to Islington before 1680, but in 1683 was again dislodged. He removed to Battersea (where his goods were seized), and thence to Clapham. These migrations destroyed his academy, but not before he had contributed to the education of some men of mark. Matthew Henry, Samuel Bury, Thomas Emlyn, and Edmund Calamy, D.D., were among his pupils. Two of his students, John Kerr, M.D., and Thomas Rowe, achieved distinction as nonconformist tutors. The academy was at an end in 1687, when Doolittle lived at St. John’s Court, Clerkenwell, and had Calamy a second time under his care for some months as a boarder. Until the death of his wife he still continued to receive students for the ministry, but apparently not more than one at a time. His last pupil was Nathaniel Humphreys.

The Toleration Act of 1689 left Doolittle free to resume his services at Mugwell Street, preaching twice every Sunday and lecturing on Wednesdays. Vincent, his assistant, had died in 1678; later he had as assistants his pupil, John Mottershead (removed to Ratcliff Cross), his son, Samuel Doolittle (removed to Reading), and Daniel Wilcox, who succeeded him. Emlyn’s son and biographer says of Doolittle that he was “a very worthy and diligent divine, yet was not eminent for compass of knowledge or depth of thought.” This estimate is borne out by his “Body of Divinity,” a painstaking and prolix expansion of the assembly’s shorter catechism, more remarkable for its conscientiousness and unction than for its intellectual grasp. His private covenant of personal religion (Nov. 18, 1693) occupies six closely printed folio pages. He had long suffered from stone and other infirmities, but his last illness was very brief. He preached and catechized with great vigor on Sunday, May 18, took to his bed in the latter part of the week, lay for two days unconscious, and died on May 24, 1707. He was the last survivor of the London ejected clergy. Six portraits of Doolittle have been engraved; one represents him in his own hair “ætatis suæ 52;” another, older and in a bushy wig, has less expression. This latter was engraved by James Caldwall for the first edition of Palmer (1775), from a painting in the possession of S. Sheaf or Sheafe, Doolittle’s grandson; in the second edition a worthless substitute is given. Doolittle married in 1653, shortly after his ordination; his wife died in 1692. Of his family of three sons and six daughters all, except a daughter, were dead in 1723.

Doolittle’s twenty publications are carefully enumerated at the close of the “Memoirs” (1723), probably by Jeremiah Smith. They begin with (1) “Sermon on Assurance in the Morning Exercise at Cripplegate,” 1661, 4to, and consist of sermons and devotional treatises, of which (2) “A Treatise concerning the Lord’s Supper,” 1665, 12mo (portrait by R. White), and (3) “A Call to Delaying Sinners,” 1683, 12mo, went through many editions. His latest work published in his lifetime was (4) “The Saint’s Convoy to, and Mansions in Heaven,” 1698, 8vo. Posthumous was (5) “A Complete Body of Practical Divinity,” etc. 1723, fol. (the editors say this volume was the product of his Wednesday catechetical lectures, “catechising was his special excellency and delight;” the list of subscribers includes several clergymen of the established church). One of his most vibrant sermon series, later turned into a tract, was “Captives Bound in Chains Made Free by Christ Their Surety”, 1674. Also, was his work “The Swearer Silenced” in 1674 made popular.