“God never denied that soul anything that went as far as heaven to ask it.”

The Works of John Trapp available in old English:

The Righteous Man’s Recompense. (164 pages)
Based on Malachi 3:16-18. Subtitled “A True Christian Characterized and Encouraged.” 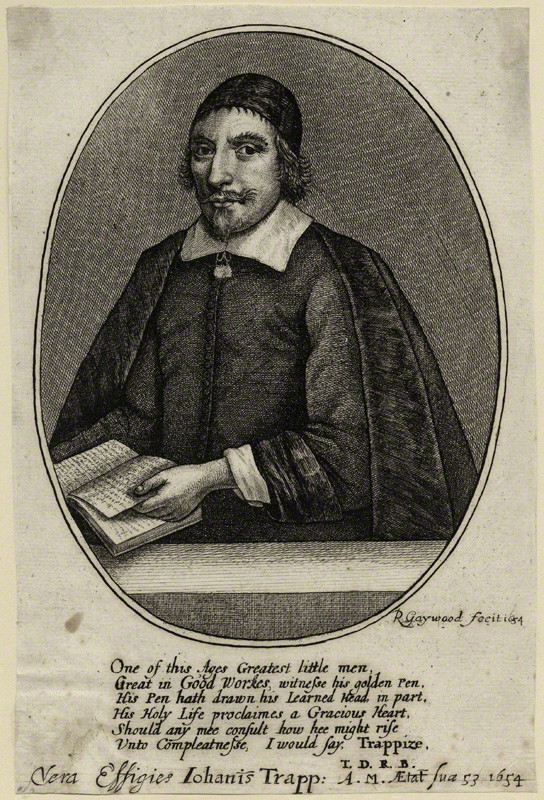 John Trapp (1601–1669), divine, son of Nicholas Trapp of Kempsey in Worcestershire, was born at Croome d’Abitot on 5 June 1601. He received his first school teaching from Simon Trapp (probably his uncle), and was afterwards a king’s scholar in the free school at Worcester. On 15 Oct. 1619 he matriculated from Christ Church, Oxford, where he remained several years as servitor. He graduated B.A. on 28 Feb. 1622, and M.A. on 17 June 1624. In 1622 he was made usher of the free school of Stratford-upon-Avon by the corporation of the town, and succeeded to the headmastership on 2 April 1624. By Edward, first lord Conway, he was made preacher at Luddington, near Stratford. In 1636 he was presented to the vicarage of Weston-on-Avon in Gloucestershire, two miles distant from his school at Stratford.

On the breaking out of the civil war Trapp sided with the parliament and took the covenant of 1643. He suffered much at the hands of royalist soldiers at Weston, and acted as chaplain to the parliamentary soldiers in the garrison at Stratford for two years. In 1646 the assembly of divines gave him the rectory of Welford in Gloucestershire and Warwickshire, where he encountered difficulty in obtaining the tithes due to him through the opposition of the ejected royalist divine, Dr. Bowen. From 27 June 1646 till 14 Sept. 1647 their differences were periodically brought before the committee for the relief of plundered ministers, and were finally referred to a committee of parliament for the county of Warwick. Trapp retained possession of the rectory of Welford till 1660, when Dr. Bowen was reinstated. Trapp then returned to Weston-on-Avon. During his residence at Welford he had appointed his son-in-law, Robert Dale, to be his deputy in the school at Stratford. Trapp died on 16 Oct. 1669, and was buried in the church at Weston-on-Avon, by the side of his wife, where his son John placed a stone over the remains of his parents.
Trapp married, on 29 June 1624, at Stratford-on-Avon, Mary Gibbard, by whom he had eleven children, of whom Joseph Trapp (1638–1698) was father of Joseph Trapp [q. v.], professor of poetry at Oxford.

A portrait of Trapp, engraved by R. Gaywood, is prefixed to his ‘Commentary upon the Minor Prophets’ (1654); another portrait of him, at the age of fifty-nine, was published in 1660. Both are reproduced in the complete edition of his works of 1867–8.

Trapp’s industry was great. Not only was he ‘one of the prime preachers of his time,’ but throughout his life he assiduously worked at his copious commentaries on the Bible, which are characterised by quaint humour and profound scholarship.