A Member of the Westminster Assembly
Today, many Christians are turning back to the puritans to, “walk in the old paths,” of God’s word, and to continue to proclaim old truth that glorifies Jesus Christ. There is no new theology. In our electronic age, more and more people are looking to add electronic books (ePubs, mobi and PDF formats) to their library – books from the Reformers and Puritans – in order to become a “digital puritan” themselves. Take a moment to visit Puritan Publications (click the banner below) to find the biggest selection of rare puritan works updated in modern English in both print form and in multiple electronic forms. There are new books published every month. All proceeds go to support A Puritan’s Mind. 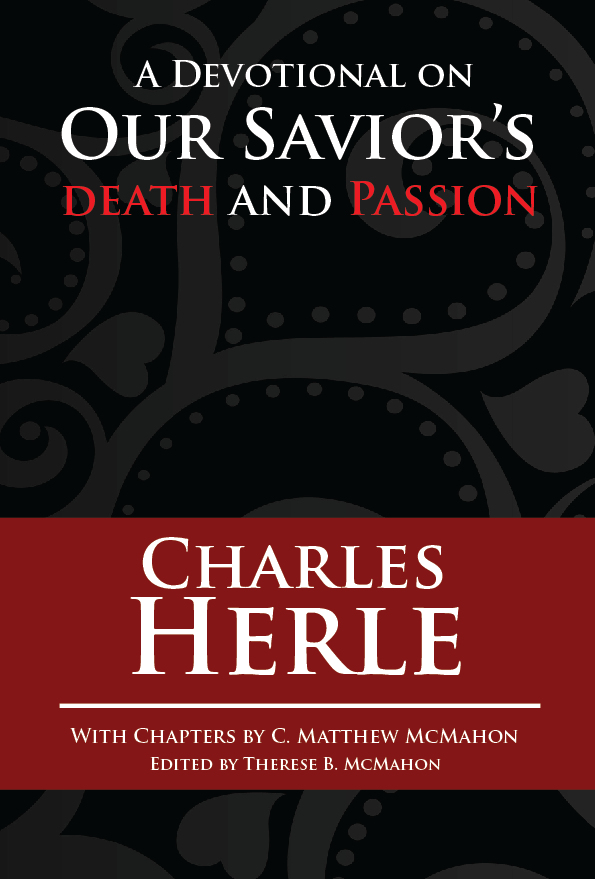 Charles Herle (1598–1659) was PASTOR OF WIN WICK, IN LANCASHIRE, A MEMBER AND SOME TIME PROLOCUTOR OF THE ASSEMBLY OF DIVINES AT WESTMINSTER.

He was born at Prideaux-Herle, near Lystwithyel, or Lostwithiel, in the county of Cornwall, in England, in the year 1598. He was descended from a good family, and bora of honourable parents. (Clark’s Lives, and Durham’s Life of Dr Harris.)

He was the third son.of Ed. Herle, Esq. Wood says, that though his ancestors had lived several generations in that place above-mentioned in genteel fashion, yet they were originally of West Herle in Northumberland. He received his education in Exeter-college, in Oxford, where he entered a student, in the year 1612. He took his degrees in arts, that of master being completed in the year 1618. Having finished his studies at the University, he entered upon the ministerial work. He was first settled at some place in Devonshire, where, being always accounted a Puritan, he suffered persecution on account of his non-conformity. For, All who will live godly in Christ Jesus shall staffer persecution. Afterward, he became rector of Winwick, in Lancashire, which is said to have been one of the richest livings in England. Upon the commencement of the civil war, he took part with the Parliament, was elected one of the Assembly of Divines at Westminster, and, upon the death of Dr Twisse, in the year 1646, he was chosen prolocutor to the Assembly. He took the Covenant, preached frequently before the Parliament, was anpointed one of the licensers of the press for books of divinity, in 1643, one of the morning lecturers at the Abbey-church, Westminster, and one of the select committee for the examination and approbation of ministers of the Gospel who petitioned for sequestered livings. And, in the year 1644, he and others, to the number of twenty-one, had full power given them to ordain ministers for a time in the county of Lancaster. Mr Herle was also appointed one of the committee of accommodation, in 1645; and he was one of” the committee of learned divines appointed by the Assembly to prepare materials for their Confession of Faith. He subscribed the proposition, “That Jesus Christ, as King of the church has himself appointed a church-government distinct from the civil magistrate.” He was accounted a moderate presbyterian. In his imprimatur to the Apology of the Independents, he calls it a Performance full of peaceableness, modesty and candour; and though he wrote against it, yet in the preface to his book, which is entitled, “The Independency on Scriptures of the Independency of Churches,” he says, “The difference between us and our brethren who are for Independency, is nothing so great as you seemed to conceive it;—at most it does but ruffle a little the fringe, not any way rend the garment of Christ; it is so far from being a fundamental, that it is scarcely a material, difference.” —When the Scottish commissioners proposed to leave the Assembly of Divines at Westminster, with a view to return home, Mr Herle, who was then prolocutor to the Assembly, spoke in the name of his brethren, and thanked the honourable and reverend commissioners from the church of Scotland for their seasonable assistance. Upon this occasion, he excused, in the best manner that he could, the Directory’s not being so well observed as it ought; and lamented that the Assembly had not power to call offenders to an account. He confessed, that their affairs were very much embarassed, and that they were still in great confusion. He observed that the Parliament was in great distress, while the common enemy was high and strong. He added, that their extraordinary successes hithert^ were owing to the prayers of their brethren of Scotland, and’ of other Protestants abroad, as well as to their own. He then mentioned with deep concern some other restraints which the Assembly lay under, but that this was not a proper time for redress.* In the year 1647, Mr Herle and Mr Stephen Marshall were appointed to attend the commissioners of Parliament to Scotland, with a view to give the Scots a just account of the affairs of England. After the King’s death, Mr Herle retired to his flock and stated ministerial labours in the Lord’s vineyard-at Win wick, where he continued the remainder of his days, and was very much beloved by his brethren in the ministry in that country. (Neal’s Hist. Puritans, vol. iii. chap. viii.)

In the year 1651, the Earl of Derby having raised a regiment of soldiers for Charles Second, who was then on his march from Scotland, he sent Lieutenant Anjndal, with about forty horses, to Mr Herle’s house at Winwick, which filled the whole family with the utmost consternation, expecting that they would be immediately plundered and ruined. When Arundal arrived at the house, he said to Mr Herle, “My business is to tell you, that the Earl of Derby wishes you to come to him with all speed; and if you will go, there shall be no farther trouble to you nor your family.” Mr Herle replied, “I will go immediately, and wait upon the right honourable the Earl of Derby, my patron;” and’ ordered his horse to be brought out. After some kind entertainment of the lieutenant and his soldiers, Mr Herle accompanied them to the Earl’s quarters, who received and treated him with the utmost civility. After some friendly conversation with him, his lordship sent him back, attended by a guard of soldiers. It has also been observed, that, after the battle of Warrington-bridge, in this year, Arundal’s forces being routed, and himself wounded, he retired to Mr Herle’s house, where he was treated with the utmost kindness.* Mr Herle was appointed, together with Mr Isaac Ambrose, Mr Edward Gee, and some others, assistant to the commissioners for ejecting ignorant and scandalous ministers and school-masters in Lancashire. Dr Grey says, that, in this office, he acted ” with great severity; and how well he was qualified for such dirty work, his public sermons sufficiently testify.” (Brook’s Lives of the Puritans, vol. iii. p. 325.. will easily judge. The character of Mr Herle is too well established to be at all impaired by any such calumny.”) He then, transcribes from those sermons the following expressions, in order to prove the charge which he has brought against him: “Do justice to the greatest. Saul’s sons are not spared; no, nor Agag; nor Benhadad, though themselves kings. Zimri and Cosbi, though princes of the people, must be pursued to their tents. What an army of martyrs has God given to the fire for our reformation at first! What a calendar of traitors has he given to the gallows, for our preservation since!” Mr Brook, in his account of Mr Herle, well observes here,—” Whether these expressions afford sufficient evidence of the doctor’s charge, or whether he designed it only to reproach the memory of this celebrated divine, every intelligent, reader.

The very famous Mr John Howe was ordained at Winwick, by Mr Herle, with the assistance of several other ministers; on which account Mr Howe would sometimes say, “That he thought few in modern times had so truly primitive an ordination; for he considered Mr Herle as a primitive bishop.” (Middleton’s Biogr. Evang’rvol. iv. Howe.) Dr Fuller says, that he was a good scholar, and esteemed by his party a deep divine; and that he was so much the Christian, the scholar, and the gentleman, that he could agree in affection with those who differed from him in judgment.” He died at Winwick, toward the end of September, in the year 1659, aged sixty one years; and his remains were interred in his own church.(Worthies of England, and Church Hist. B. xi.)

A few choice sayings of Mr Herle, which have been collected from his writings, are here subjoined, in order that the reader may obtain a fuller view of his true character. By their fruits ye shall know them.-*”Thankfulness is the best tenure; it gives the surest title to new mercies.—Religious families are the surest nurseries of religion.” And speaking of the influence which the bad example of parents has on their children, he says, “That a Cain will not want others to go on in his way, nor a Jeroboam followers in making Israel to sin.— The highest office of government is, to be the nurse, the guardian, of religion.—Peace without contentment, is but lethargy; safety without it, is but a prison; but contentment without both, hi continual feast, a kingdom. The proud man hath no God, the unpeaceable man hath no neighbour, the distrustful man hath no friend; but the discontented man hath not himself- (Wood’s Athens Oxon. vol. ii.)-As use gives things perfection, so usefulness gives them value.—Let divine truths be believed, others proved.—Long discourses are over-feathered arrows, that over-shoot the mark, and ordinarily lose both game and labour by wearying the attention. Our discourse should be to. the matter, as trimming to clothes, rather proper than gaudy, rather Jit than fine. Affectation in any thing, especially in words, argues more ambition, than ability; and discovers a narrow soul, that is fain to take up forms and examples instead of reason, and dares not write but by a copy.— Injuries, if we are not wanting to ourselves, are the greatest advantages, as well as trials, in our whole lives. Courtesies, applauses, successes, steal us out of ourselves. Injuries restore us to ourselves again; it is in our patience we possess our souls. Would we instead of making a return of injuries on others, make a retirement by them into ourselves, we should find them the best restoratives of our minds to themselves.