“Prayers not felt by us are seldom heard by God.”
“All grace grows as Love to the Word of God grows.” 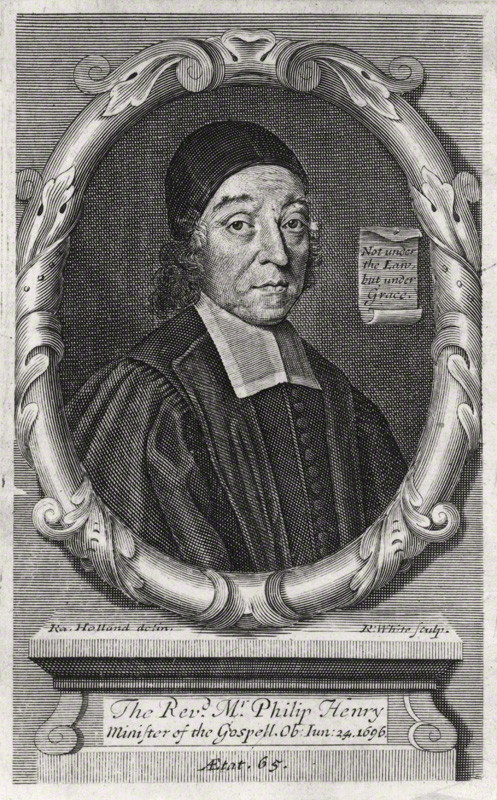 Philip Henry (1631-1696), nonconformist divine and diarist, eldest son of John Henry, keeper of the orchard at Whitehall, was born at Whitehall on 24 Aug. 1631. His father, son of Henry Williams, was born at Briton Ferry, Glamorganshire, on 10 July 1590, and ‘took his father’s Christen-name for his Sir-name, after the Welsh manner;’ he rose to be page of the backstairs to the Duke of York, and was buried at St. Margaret’s, Westminster, on 2 March 1652. His mother, Magdalen, daughter of Henry Rochdale, was baptised at St. Martin’s-in-the-Fields on 19 Oct. 1599, and died on 6 March 1645. Philip Herbert, fourth earl of Pembroke, in whose service his father had been, was his godfather.

As a child he was playmate to the princes Charles and James, and kept to his dying day a book given him by the latter. Archbishop Laud took notice of him for his readiness in opening the watergate when Laud ‘came late from council’ to cross to Lambeth. His father took him to see Laud in prison, when the archbishop ‘gave him some new money.’ After preliminary schooling he was admitted in 1643 to Westminster School, and became a favourite pupil of Richard Busby [q. v.], who treated him very kindly. His mother, a zealous puritan, got leave for him to attend the early lecture at Westminster Abbey, but to Busby’s diligence in preparing him for the communion he ascribes his definite adoption of a religious life on ‘April 14 (or yer. abouts) 1647.’ In the picture of Busby in the hall of Christ Church, Oxford, Henry is introduced by his side (in the ‘Catalogue of the First Exhibition of National Portraits,’ 1866, No. 943, the younger figure is said to be Matthew Henry).

In May 1647 Henry was elected to a studentship at Christ Church, Oxford, and went into residence on 15 Dec. He was admitted student on 24 March 1648, just before the parliamentary visitation, which to his regret removed Underwood, his tutor, substituting William Finmore (afterwards archdeacon of Chester), ‘a person able enough, but not willing.’ While at home on leave in January 1649 he saw Charles I, who ‘went by our door on foot each day’ to his trial, ‘& once hee spake to my father & sayd Art thou alive yet!’ Of Charles’s execution he gives the graphic account of a sorrowing eye-witness. He graduated B.A. in 1649 and M.A. on 10 Dec. 1652. His father’s death left the family in great straits, which were relieved by the occasional bounty of friends.

Henry preached his first sermon at South Hinksey, Oxfordshire, on 9 Jan. 1653. On the introduction of Francis Palmer, afterwards professor of moral philosophy, he was engaged (30 Sept.) by John Puleston, justice of the common pleas, as tutor to his sons at Emral, Flintshire, and preacher at Worthenbury Chapel, in the parish of Bangor-is-coed, same county. In 1654 he was with his pupils at Oxford; from 1655 he was constantly at Worthenbury. The rector of Bangor was Henry Bridgeman [q. v.], but the living had been sequestered in 1646. Robert Fogg, the parliamentary incumbent, put in a caveat (14 Sept. 1657) against Henry’s ordination as minister of Worthenbury, but afterwards withdrew it. Accordingly, having undergone a lengthy but rather superficial examination by the fourth Shropshire classis (constituted by parliament, April 1647), he was ordained with five others at Prees, Shropshire, on 16 Sept. 1657. No mention is made of his subscribing the ‘league and covenant,’ as ordered by parliament; he made a strongly Calvinistic confession, but said nothing about church government. His ideal was a modified episcopacy on Ussher’s system. In 1658 a commission of ecclesiastical promotions took Worthenbury Chapel out of Bangor parish, making it with Worthenbury Church (a donative) a new parish, of which Henry was incumbent. He declined the vicarage of Wrexham, Denbighshire, in March 1659, refusing shortly afterwards a considerable living near London. He appears to have sympathised with the royalist rising under Sir George Booth in August 1659. Mrs. Puleston died in 1658, and the judge on 5 Sept. 1659. Roger Puleston, their eldest son, had no love for his tutor; they had even come to blows (16 Sept. 1656).

At the Restoration, which Henry, then newly married, welcomed as ‘a publick national mercy,’ Bridgeman resumed the rectory of Bangor, and Henry’s position was simply that of his curate at Worthenbury Chapel. In September 1660 he was presented at Flint assizes with Fogg and Richard Steel for not reading the common prayer, and again at the spring assizes, without effect. He had taken the oath of allegiance, but refusing reordination he was incapable of preferment. On 24 Oct. 1661 Bridgeman, having failed to arrange matters, came to Worthenbury and read Henry’s discharge ‘before a rable.’ Henry showed some feeling, but was allowed to preach farewell sermons on 27 Oct. The Uniformity Act, which took effect on 24 Aug. 1662, ‘being the day of the year on which I was born … and also the day of the year on which by law I died,’ made him a ‘silenced minister.’ He surrendered his house and annuity for 100l., to avoid litigation, and left Worthenbury for Broad Oak, Flintshire, a property settled upon his wife.

Busby asked him some time afterwards, ‘Pry’thee, child, what made thee a nonconformist?’ His answer was, ‘Truly, Sir, you made me one, for you taught me those things that hindered me from conforming.’ This refers to principles of conscience, not to details of scruple. He consulted John Fell, D.D. [q. v.], then dean of Christ Church, about his difficulties. His main objection was re-ordination, which he reckoned simony. On 10 Oct. 1663 he was apprehended with thirteen others and imprisoned for four days at Hanmer, Flintshire, on suspicion of an insurrectionary plot. On 15 March 1665 he was cited to Malpas, Cheshire, for baptising one of his own children; at the end of the month he was treated as a layman, and was made sub-collector of tax for the township of Iscoyd. The Five Mile Act of 1665 placed him in a difficulty, Broad Oak being four reputed miles from Worthenbury; on actual measurement it was found to be sixty yards over the five miles. However, he removed for a season to Whitchurch, Shropshire. All this time he was a regular attendant at the parish churches, his habit being to stand throughout the service; he forbore communicating simply on the ground of the kneeling posture. In February 1668 he preached by request in the parish church of Betley, Staffordshire, a circumstance of which distorted accounts were reported in the House of Commons. Not till the short-lived indulgence of 1672 did he resume his public ministry in his licensed house, still avoiding (like John Wesley) encroachment on church hours. On the withdrawal of the indulgence, he continued to preach without molestation till 1681, when he was fined for keeping conventicles. In 1682 he had a public discussion with quakers at Llanfyllin, Montgomeryshire, and was drawn into a debate on ordination at Oswestry, Shropshire, with William Lloyd, then bishop of St. Asaph, and Henry Dodwell the elder [q. v.]. At the time of the Monmouth rebellion he was confined in Chester Castle for three weeks (July 1685) under a general order from the lord-lieutenant. He joined in a cautiously worded address (September 1687) to James II. In May 1688 he was placed on the commission of the peace for Flintshire, but declined to qualify. At the revolution he had great hopes of ‘comprehension.’ The terms of the Toleration Act he accepted; he would have preferred a toleration without subscription; there were points in the articles which, ‘without a candid construction, would somewhat scruple mee, so would the Bible its. strictly taken & in the letter, in those places which seem contradictory, were it not for such an interpretation.’ Hereafter he ministered at Broad Oak ‘at publick time,’ in an outbuilding near his house.

His last years were spent in assiduous pastoral labours, in spite of waning strength. He died at Broad Oak of a sudden attack of colic and stone, on 24 June 1696, and was buried on 27 June in Whitchurch Church, where a marble tablet was erected to his memory, bearing a Latin inscription by John Tylston, M.D., his son-in-law. In 1712, when the church was rebuilt, his body was removed to the churchyard, and the monument to the porch. In 1844 a tablet bearing an English version of the epitaph was placed in the north aisle of the church, the original monument being transferred to Whitewell Chapel, near Broad Oak. Funeral sermons were preached at Broad Oak by Francis Tallents of Shrewsbury, James Owen of Oswestry, and Matthew Henry. Henry’s portrait, in the possession (1882) of Mrs. Philip Henry Lee, shows a plaintive countenance, with puritan skullcap and band; an engraving is prefixed to the ‘Life’ by his son. He married, on 26 April 1660, at Whitewell Chapel, Katharine (b. 25 March 1629, d. 25 May 1707), only child of Daniel Matthews of Bronington, Flintshire, and had two sons, John (b. 3 May 1661, d. 12 April 1667), and Matthew [q. v.], and four daughters, all of whom married. A genealogy of his descendants, to 1844, was published by Miss Sarah Lawrence of Leamington.

Unless we count a page of respectable Latin iambics contributed to ‘Musarum Oxoniensium Elaiophoria,’ &c., Oxford, 1654, 4to, Henry published nothing. Sir John Bickerton Williams published from Henry’s manuscripts: 1. ‘Eighteen Sermons,’ &c., 1816, 8vo. 2. ‘Skeletons of Sermons,’ &c., 1834, 12mo. 3. ‘Exposition … upon the first eleven chapters of … Genesis.’ &c., 1839, 12mo. 4. ‘Remains,’ &c., 1848, 12mo. 5. His diaries for twenty-two years (written in interleaved Goldsmith’s Almanacs, with a crow-quill) were published in 1882. Like his manuscripts for the pulpit, they consist of brief notes and memoranda, invaluable for the light they throw on the inner life of the earlier nonconformity. They exhibit no humour, little evidence of learning or literature, but much curiosity about natural wonders. In 1656 he bought a library from a minister’s widow for 10l., and added few books to it. He believed in special providences, and invariably saw a divine judgment in the misfortune of an enemy of nonconformity. The veneration which hallows his memory is a tribute to his purity of spirit and transparency of character.

The Works of Philip Henry available in old English: