An English puritan and nonconformist minister of the Gospel, and deep devotional writer.

The Works of Ralph Venning available in old English:

1. Orthodoxe Paradoxes, 1647.
2. The New Command Renew’d, 1650.
3. Milke and Honey, 1653.
4. Canaan’s Flowings, 1654.
5. Things worth thinking on, 1665.
6. The Beauty of Holiness, 1665.
7. The Dead yet Speaking, or Mr. Venning’s Living Sayings, 1674.
8. Alarm to Unconverted Sinners, 1675.
9. Venning’s Remains, 1675.
10. English Greek Lexicon, 1661.
11. Mysteries and Revelations. (448 pages) PDF Google Books
Subtitled, “The Explication and Application of Several Extra-Essential and Borrowed Names, Allusions, and Metaphors in the Scripture”. Contains the following:
1. The New Command Renewed (or, Love One Another).
2. Mysteries and Revelations Concerning God and Christ (or, God in Christ).
3. Orthodox Paradoxes Theoretical and Experimental (or, A Believer Clearing the Truth by Seeming Contradictions).
4. The Triumph of Assurance.
5. Milke and Honey (or, A Miscellaneous Collation of Many Christian Experiences, Sayings, Sentences, and Several Places of Scripture Improved).
6. Orthodox Paradoxes (part 2).
7. Dives and Lazarus (or, Not Now, but Hereafter).

A very popular work in his day: Sin, the Plague of Plagues. (162 pages)
Puritan Publications is modernizing and updating this work. 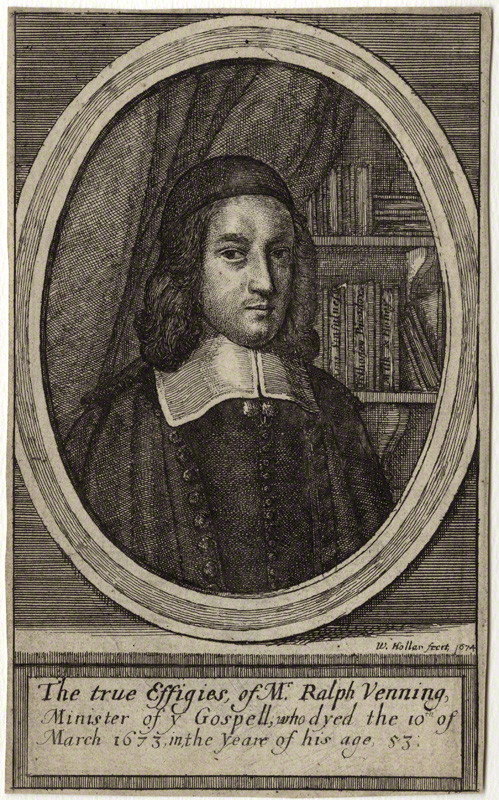 Ralph Venning (1622-1674), nonconformist divine, son of Francis and Joan Venning, was born in Devonshire, perhaps at King’s Teignton, about 1621. He was the first convert of George Hughes [q. v.], the puritan vicar of Tavistock (dedication of Mysteries and Revelations, 2nd ed. 1649). He was educated at Emmanuel College, Cambridge, where he was admitted as a sizar on 1 April 1643, graduated B.A. 1646, and proceeded M.A. 1650. He held a lectureship at St. Olave’s, Southwark, where he had a great repute as a preacher of charity sermons. Ejected by the Uniformity Act (1662), he became a colleague to Robert Bragge (1627-1704), pastor of an independent congregation at Pewterers’ Hall, Lime Street, Fenchurch Street, and held this charge till his death. He died on 10 March 1673-4, in his fifty-third year, and was buried in Bunhill Fields. He married Hannah, widow of John Cope of London, and left a son, and a daughter Hannah (d. 7 June 1691). His portrait was engraved by Hollar. Of his style, John Edwards (1637-1716) [q. v.] remarks in ‘The Preacher ‘ (1705, i. 203): ‘He turns sentences up and down, and delights in little cadences and chiming of words.’ His works still retain popularity; cheap reprints of some of them were issued in 1891.