A puritan who wrote one of the best works on temptations and Satan's onslaught against the Christian soul.

The works of Thomas Brooks:

The Complete Works of Thomas Brooks, Volume 1. (558 pages) PDF Internet Archive
1. A Memoir
2. Precious Remedies Against Satan’s Devices
3. Apples of Gold for Young Men and Women
4. The Mute Christian Under the Smarting Rod
5. A String of Pearls.

The Complete Works of Thomas Brooks, Volume 2. (552 pages) PDF Internet Archive
1. An Ark for all God’s Noahs
2. The Privy Key of Heaven
3. Heaven on Earth (or, Well-Grounded Assurance).

The Complete Works of Thomas Brooks, Volume 3. (520 pages) PDF Internet Archive
1. The Unsearchable Riches of Christ
2. A Cabinet of Jewels. 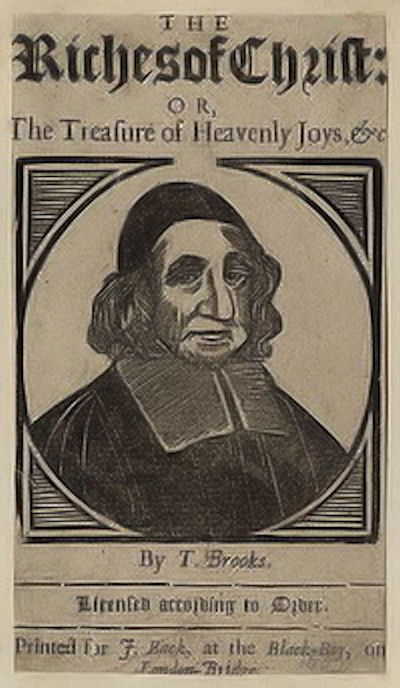 Containing the following: The Crown and Glory of Christianity.

The Complete Works of Thomas Brooks, Volume 6. (520 pages) PDF Internet Archive
1. London’s Lamentations on the Late Fiery Dispensation
2. The Glorious Day of the Saints’ Appearance
3. God’s Delight in the Progress of the Upright
4. Hypocrites Detected
5. A Believer’s Last Day is His Best Day
6. A Heavenly Cordial
7. The Legacy of a Dying Mother and Mrs. Bell’s Experiences
8. Indices.

Among his works these are known as his most popular:

Thomas Brooks (1608-1680), puritan divine, was probably of a pious puritan family settled in some rural district. He matriculated as pensioner of Emmanuel on 7 July 1625. He was doubtless licensed or ordained as a preacher of the gospel about 1640. In 1648 he was preacher at St. Thomas Apostle. At an earlier date Brooks appears to have been chaplain to Rainsborough, the admiral of the parliamentary fleet; he was afterwards chaplain to the admiral’s own son, Colonel Thomas Rainsborough, whose funeral sermon he preached in November 1648. In the same year (26 Dec.) he preached a sermon before the House of Commons, and a second sermon to the Commons on 8 Oct. 1650. In 1652-3 he was transferred to St. Margaret’s, Fish-street Hill. There he met with some opposition, which occasioned his tract, “Cases considered and resolved; … or Pills to purge Malignaiits,” 1653, and in the same year he published his “Precious Remedies.” In 1662 he was one of the ejected. After preaching his farewell sermon (an analysis of which is in Palmer’s “Memorial”) in 1662, he continued his ministry in a building in Moorfields. In the plague year he was at his post, and published his “Heavenly Cordial” for such as had escaped. The extreme rarity of this little volume is said to be owing to the great fire of London, which destroyed the entire stock of so many books. His thoughts on this “fiery dispensation” are recorded in his “London’s Lamentations,” published in 1670. Baxter mentions Brooks respectfully as one of the independent ministers who held their meetings more publicly after the fire of London than before. About 1676 his first wife died, and he published an account of her “experiences,” with a funeral sermon preached by a friend. Shortly afterwards he married a young woman named Cartwright. His will is dated 20 March 1680. He died on 27 Sept., aged 72. A copy of his funeral sermon, by John Reeve, dated 1680, is in Dr. Williams’s library. More than fifty editions of several of his books have been published. The Religious Tract Society long continued to reprint some of Brooks’s writings; the greater part of his smaller pieces were also constantly kept in stock by the Book Society. Dr. Grosart’s notes on the early editions contain much information. The first editions are as follows:

Besides the works listed above, Brooks wrote epistles prefixed to Susannah Bell’s “Legacy of a Dying Mother,” 1673; to Dr. Everard’s “Gospel Treasury,” 1652; to the works of Dr. Thomas Taylor, 1653; and to John Durant”s “Altum Silentium,” 1659; also the “Experiences of Mrs. Martha Brooks,” wife to Thomas Brooks, appended to her funeral sermon by J. C. (Dr. John Collinges, of Norwich?), 1676. To this Brooks added notes. Some select works of Brooks were published under the editorship of the Rev. Charles Bradley in 1824; the “Unsearchable Riches” was included in Ward’s “Standard Library.” The best of his sayings have been printed in “Smooth Stones taken from Ancient Brooks,” by the Rev. C. H. Spurgeon. The complete works of Thomas Brooks, edited with a memoir by the Rev. A. B. Grosart, were printed at Edinburgh in 1866 in six volumes octavo. In his “Descriptive List” John Brown reserves a select place for Brooks’s works, as among the best of the nonconformists” writings. His works abound in classical quotations in Hebrew, Greek, and Latin. It is said there was a printed catalogue of Brooks’s library issued for the sale, but no copy of it can be traced.